This website requires certain cookies to work and uses other cookies to help you have the best experience. By visiting this website, certain cookies have already been set, which you may delete and block. By closing this message or continuing to use our site, you agree to the use of cookies. Visit our updated privacy and cookie policy to learn more.
Home » Wana Brands Reaches for New Heights
Cannabis ProductsCannabis Food & Beverage CategoriesCannabis BusinessCannabis Candy
CANNABIS PRODUCTS | MARCH 2022

Wana Brands has built a strong footprint across the U.S. and Canada, but an expected acquisition by Canopy Growth Corporation could take the company even further.

Nancy Whiteman’s business background is as traditional as it gets.

After earning an MBA, she served in corporate America for more than 20 years, focused in sales and marketing. Whiteman, however, had always wanted to start her own business, and as a resident of Colorado, found herself drawn to the opportunity cannabis presented.

Whiteman and a partner founded Wana Brands in Boulder, CO in 2010.

“I got into it thinking this would be an interesting, fun adventure, and it really wasn't until we had products in the market and started getting incredible feedback from our customers about how much our products were helping them that the light bulb went off for me,” she says. “I started to really understand the power of the plant and became very committed and passionate about the power of cannabis to change lives in really positive ways.”

Wana Brands now serves 22 markets across the U.S. and Canada, delivering cannabis-infused gummies innovated to meet specific consumer needs. The company has no plans of slowing down, with hopes that an impending acquisition by Canopy Growth Corporation will take Wana Brands to new heights.

Whiteman first entered the cannabis space by sharing a small commercial kitchen a neighbor who was dabbling with infused sodas. Though they parted ways shortly after, Whiteman persisted with edibles, facing a steep learning curve in cannabis-infused food production.

“When this opportunity came along, it was really exciting and I was thrilled to be able to do it, but it was very much a learning-as-we-went-along kind of an experience because I didn't really have any background in manufacturing or in food production,” she says. “I really had to learn it from scratch.”

“My feeling was that we could do a lot better,” she says. “We could make them from scratch and infuse them during the cooking process, so you weren't biting into hash, and it would be evenly homogenized within the product. We started down that path, and we actually didn't know at that point in time that gummies were going to end up being the juggernaut that they turned out to be.”

Wana Brands served Colorado’s medical cannabis market before adult use took effect in Colorado in 2014. While it took about a year for the supply of cannabis biomass to meet demand, Whiteman says it marked a turning point in the business. 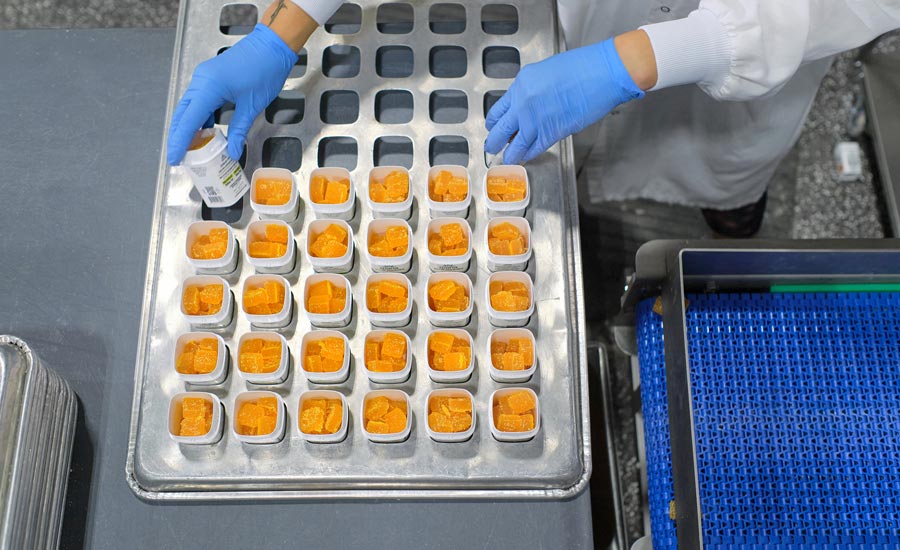 “(Demand) was enormous,” she says. “By the end of the first or second year, I'd say that our adult use sales were running probably three times our medical sales.”

Around the same time, Wana Brands began expanding to other markets. As a startup, the company didn’t have the capital to secure licenses and build out facilities, so it pursued an asset-light model and developed relationships with manufacturing partners.

Whiteman says an alignment of ethics and values is key, but operational expertise and meshing of business models are also important — especially when navigating differences between cannabis markets.

“There's not a one-size-fits-all in this,” Whiteman says. “What we have seen is that a variety of different situations can work, as long as we talk about it up front and talk about the implications of all of it.”

Wana Brands now operates in nine Canadian provinces and 13 states, with more to follow in 2022.

In the early days, a lack of consistency, transparency, and third-party testing created an aversion to cannabis edibles. Under Whiteman’s vision, Wana Brands aimed to change that, says Mike Hennesy, VP of innovation.

Instead of spraying finished gummies, Wana Brands focused on infusing cannabis oil during the cooking process. Then, the company began experimenting with ratios of THC and CBD with the goal of refining the consumer experience.

“We started to understand how CBD could moderate some of the negative side effects of THC, that different ratios of those products could help for different conditions (and there were) different effects people were looking for,” Hennesy says. 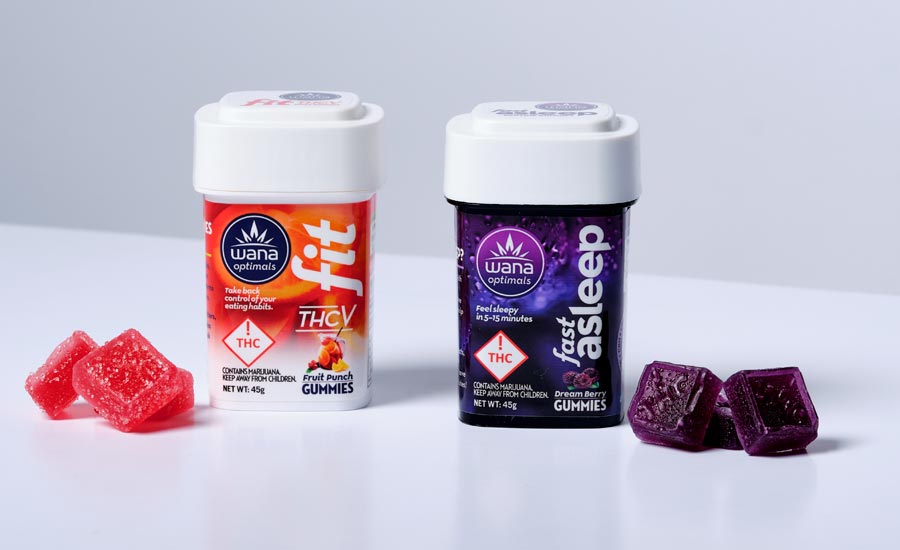 Then Wana Brands zeroed in on one of the major challenges associated with cannabis edibles: onset time. Prolonged onset periods could lead to overconsumption, and as Hennesy notes, the 11-hydroxy-THC high delivered through edibles can have a powerful sedative effect.

For two years, Wana Brands scoured the market for technologies that would release cannabinoids more rapidly and consistently. The company selected Azuca’s TiME Infusion technology, which offers an onset time of approximately 15 minutes and a duration of about three hours. 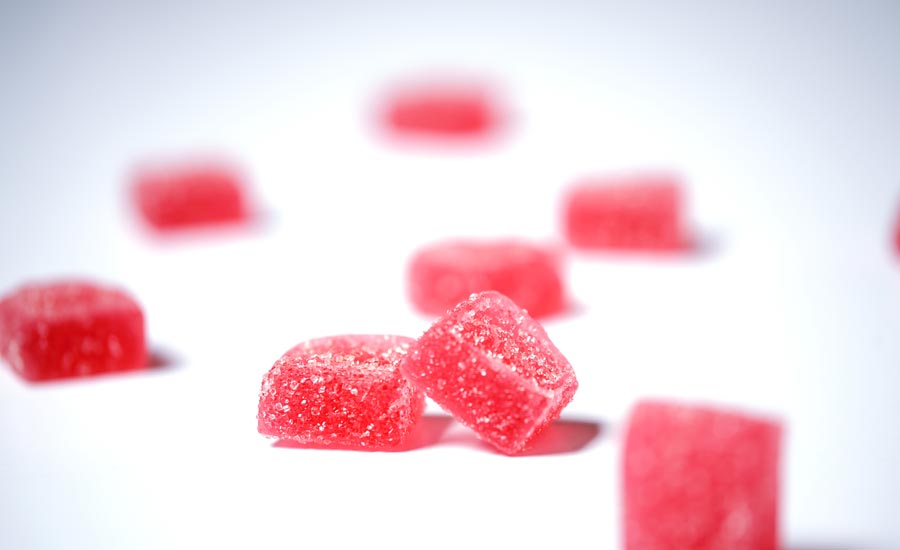 “They're just designed for a different use case,” Hennesy says. “They're for coming out with friends, going to the movies, or if you’re going to want to be active later and not be intoxicated the rest of the evening.” “What we're finding is that people like having something that can take effect quickly and not last as long, which isn't something that I think we focus on as much in innovation or were thinking was going to be as important as it was,” Hennesy says.

Hennesy says the Wana Quick gummies are among the company’s top-selling SKUS, and Wana Brands is receiving positive feedback as it continues to roll them out across markets.

“What we're finding is that people like having something that can take effect quickly and not last as long, which isn't something that I think we focus on as much in innovation or were thinking was going to be as important as it was,” he says.

Building on the desire to support specific use cases, Wana Brands introduced Wana Optimals last year. Including Fast Asleep and Fit, the products are designed to promote sleep and provide energy and focus.

“The Wana Optimals are a very logical next step for cannabis innovation,” Hennesy said. “It (involved) understanding that cannabis is used for many different things, many different strains have certain effects, and people were seeking that out in dispensaries.”

Fast Asleep — formulated with a Mixed Berry flavor — features a blend of CBD, THC, CBG, CBN, melatonin, and more than 30 specialized terpenes curated based on AI-generated data from thousands of consumer experiences. The Fit gummies — featuring a Fruit Punch flavor — are infused with tetrahydrocannabivarin (THCV), which can energize consumers and support appetite control. 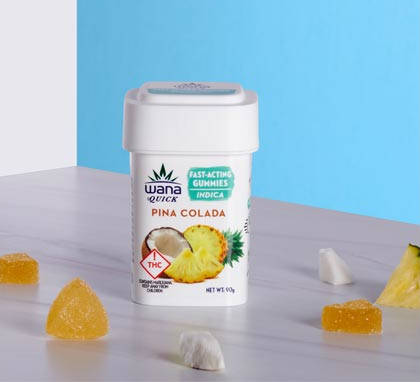 While customized cannabinoid and terpene blends allow Wana Brands to create products targeting specific experiences, navigating the supply chain hasn’t been easy, Hennesy says. Not only is it difficult to get consistent raw materials, but it’s also a challenge to juggle regulations in different markets.

“It’s a deep coordination between my team, the market expansion team, and our production teams to make it work as consistently and powerfully as possible,” he says.

In addition to expanding the Wana Optimals range this year, Wana Brands plans to introduce Wana Quick Spectrum, a line of live rosin THC gummies. The live rosin is created by cryogenically freezing fresh biomass, extracting it with an ice water bath, and then putting the material into a rosin press.

Hennesy says the Wana Quick Spectrum gummies will have the same onset time as the original Wana Quick gummies, but they’ll offer adventurous consumers a multidimensional, dab-like experience in a consistently dosed edible.

“This is top-shelf live rosin that we're combining with our fast-acting technology, and we’re putting it all into really delicious, exciting flavors,” Hennesy says.

The Wana Quick Spectrum line will include:

“It’s going to be a really exciting new product for Wana that we can't wait to launch,” Hennesy says.

While Wana Brands has independently built a strong footprint across the U.S., Whiteman knew the company would need to look externally to accelerate its momentum, especially with the expected federal legalization of THC on the horizon.

“We are in an absolute overwhelming majority of people supporting legalization of cannabis for medical use and a clear majority also for adult use,” she says. “Although none of us can project the timing on it, the likelihood of federal legalization is very high. It may not happen this year, it may not happen immediately, but it's going to happen. And so what are the implications of that? When you look at an industry that has federal legalization, the landscape changes completely and you need to think more broadly than where the industry is today.” 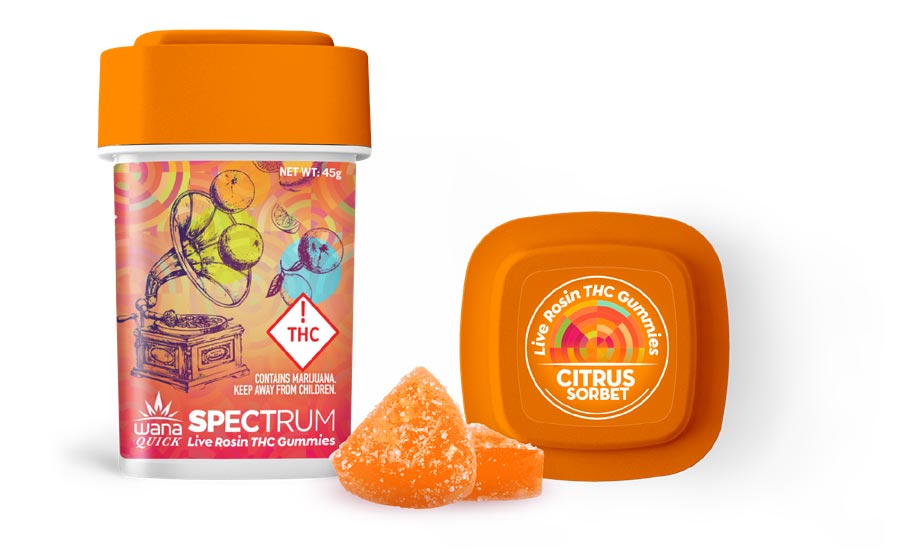 Wana Brands sought out a partner that not only matched its mission and ethics, Whiteman says, but would also offer distribution connections to support scaling the business.

Canada’s Canopy Growth Corporation fit the bill. Offering a range of cannabis and CBD products across the U.S. and Canada, the company generated a net revenue of C$547 million (US$431 million) in fiscal year 2021. Constellation Brands – the largest beer importer in the Unites States and producer, marketer, and distributor of Corona, Modelo and Svedka vodka, among other brands – is Canopy Growth’s primary investor, with a 39% stake in the company.

Wana Brands first encountered Canopy Growth when it looked to expand into Canada. Though the company didn’t partner with Canopy Growth then, the connection was renewed when CEO David Klein took the helm in January 2020.

After conversations began in earnest in mid-2021, Canopy Growth announced in October its intent to acquire Wana Brands upon federal permissibility of THC in the U.S. Canopy Growth agreed to pay $297.5 million upfront for the right to acquire the company, with additional payments transferred once Canopy Growth exercises its option to acquire any or all of Wana’s entities. Until then, the companies will operate independently.

Klein said at the time of the announcement that acquiring Wana Brands would strengthen Canopy Growth’s market position in the U.S. and Canada.

“The right to acquire Wana secures another major, direct pathway into the U.S. THC market upon federal permissibility, and in Canada, we’ll be adding the top-ranked cannabinoid gummies to our industry-leading house of brands,” he says. “We’re confident in the future growth of the edibles category and the tremendous opportunities with Wana.”

Whiteman is also optimistic for the pairing, pointing to Canopy Growth’s existing infrastructure and relationships.

“Wana's hope is to continue to build ourselves into a very prominent national and international brand, and I think Canopy has both a vision and resources to help us do that,” she says.

How to Choose Chocolate Manufacturing Equipment for Cannabis Products