This website requires certain cookies to work and uses other cookies to help you have the best experience. By visiting this website, certain cookies have already been set, which you may delete and block. By closing this message or continuing to use our site, you agree to the use of cookies. Visit our updated privacy and cookie policy to learn more.
Home » Kombuchade Combines CBD with Power of Kombucha in New Beverage
Cannabis ProductsCannabis Food & Beverage CategoriesCannabis BusinessCannabis Beverages
CANNABIS PRODUCTS | JUNE 2022

Kombuchade Combines CBD with Power of Kombucha in New Beverage

Matt Lancor is on a mission to disrupt and elevate the sports beverage game. He’s the founder of the Chicago-based Kombuchade brand of sports drinks, harnessing the natural power of fermented kombucha to foster improved gut health for serious athletes. And most recently, he has entered the hemp-derived cannabidiol (CBD) sports post-workout market with his Kombuchade Recovery drink.

Health researchers continually uncover new benefits of strong gut health, scientifically connecting the dots between our gut health and reduced inflammation and stronger immunity. These benefits are second nature to Lancor, who suggests our gut is, in essence, a second “brain,” and that proper gut health is instrumental to athletic performance and recovery. Messaging on the Kombuchade Performance and Recovery cans promises to “Balance your Brain(s).”

Lancor is a revolutionary in the sports drink world, and he’s changing minds two brains at a time. 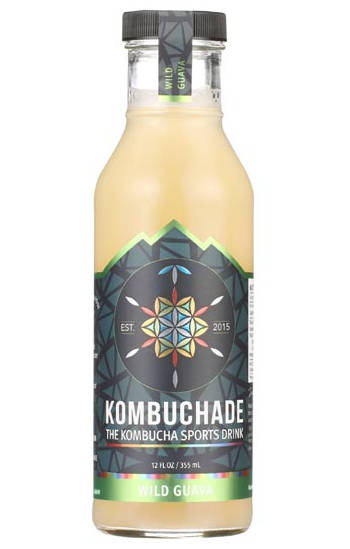 Every can of Kombuchade carries a message from Lancor that’s central to his mission: “I believe in higher human potential; I know it will take more than sugar water and food coloring to get there.”

The SCOBY—an acronym for the “symbiotic culture of bacteria and yeast”—embodies the art and science of kombucha production. Like sourdough starters used in baking, the SCOBY serves the essential need of jump-starting the kombucha brew, fermenting sugars and introducing beneficial bacteria. “I started with a piece about the size of a hockey puck almost 8 years ago, and they’ve been growing and multiplying ever since.”

During production, Lancor heats the Kombuchade brew to about 80˚F for its seven-day fermentation cycle. “We take raw herbs and teas and blend them ourselves into our formulas,” he says. “All of the products include rooibos, yerba mate, and ginger.” He notes rooibos is particularly helpful for digestion.

Every ingredient brings functionality to the formula. “Yerba mate helps us create sustainable energy, and ginger is used in many cultures to help detox the body from heavy metals and other things,” says Lancor. “The base blend is green and oolong tea. Then it gets fermented with the SCOBY. It’s a living ecosystem that we feed with raw organic cane sugar. Then it takes fibers from the tea plants, and they cross-link him into a cellulose mass. It also changes oxygen flow during fermentation.”

Kombuchade is located in a 100,000-square-foot building known as The Plant, a research and production facility located in the Back of the Yards neighborhood on the South Side of Chicago. The Plant is home to a thriving, progressively evolving community of businesses.

The Plant’s was originally a USDA-certified pork processing facility—a logical fit for its location in Back of the Yards, the historic meatpacking district of Chicago. Therefore, the facility features key food production necessities, making it a natural for food and beverage companies like Kombuchade.

Bubbly Dynamics, owner of the facility, seeks to repurpose waste as a valuable resource while finding new ways to eliminate waste and maximize energy usage. In addition to kombucha brewing, The Plant currently houses companies dedicated to indoor and outdoor farming, brewing beer, bakery production, cheesemaking, coffee roasting, algae research, and more. An anaerobic digester is currently in development that will potentially use the digester’s biogas production to cleanly fuel production at The Plant.

Kombucha is unique, since it can undergo aerobic and anaerobic fermentation, notes Lancor. “Traditionally, when you look at fermentation, most people are doing what’s called anaerobic fermentation, so they seal oxygen away from it.” This is true for beer and wine—products where increased alcohol content is desired. “When oxygen is present, it actually creates acids like what you would find in apple cider vinegar as opposed to creating alcohol,” he says. 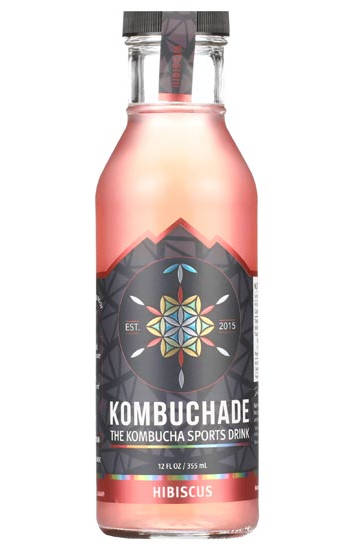 “We actually love oxygen in solution, because then it forces the fermentation toward acid production as opposed to alcohol,” says Lancor. “You can play with that process. We’ve had people ask us about doing like a hard kombucha. All we would need to do is seal it off from oxygen for a small period of time and make sure there was enough sugar or energy in there for the microbes to create alcohol instead of acids.”

Since 2015, Lancor has offered his core Kombuchade line. The line is bottled in glass, and today offers a range of flavor options: 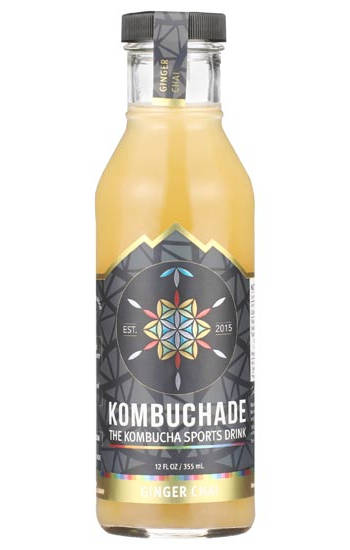 The second generation of products, Kombuchade Performance and Recovery, comes in slim cans, eliminating fruit ingredients for a streamlined line for serious athletes. The Performance product offers a blend of gut-friendly probiotics, organic botanicals, and minerals and elements from the ocean for sustained energy.

“The Performance product is our base blend made with a really high-grade sea salt,” says Lancor. “So, it has minerals and elements found in seawater, but in the right proportions to mimic what our blood should look like. We use those minerals and elements as catalysts for different biological processes, whether we’re performing or recovering, and whether we’re in ‘fight or flight’ mode, or resting and digesting.”

“A lot of the ingredients are wild-harvested down in South America, in Chile and in the Patagonia region,” says Lancor. “The two canned products were made for more-serious athletes. I made them without fruit juice or added flavors and sugars, because that's what I wanted out of a probiotic solution for myself as an athlete.”

The CBD for Kombuchade Recovery is added after fermentation. “There is some debate on whether cannabinoids would be consumed during fermentation,” says Lancor. “I haven’t seen anything definitive, but we do post-fermentation infusion.” 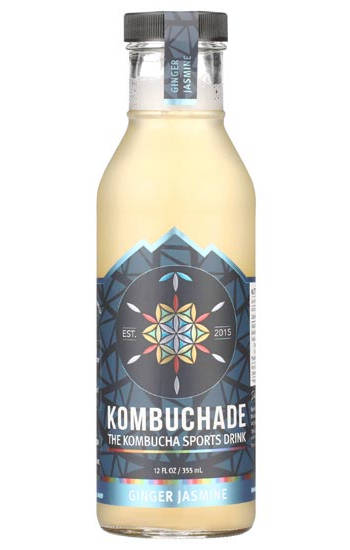 Lancor is a serious athlete himself, and is a daily consumer of his own products. He’s a member of the Chicago Lions Rugby Club, and maintains a regimen of drinking Kombuchade Performance before each workout, and Kombuchade Recovery before bed.

Lancor also works with a range of different athletes to evaluate the effectiveness of his Kombuchade Performance and Recovery products, including professional and Olympic rugby players, wrestlers, and mixed martial arts (MMA) fighters.

“In 2018, when the World Anti-Doping Agency removed CBD from its list of banned substances, Olympians, UFC fighters, a lot of really elite-level athletes were given the thumbs-up that they could start consuming CBD for benefits,” says Lancor.

“The enteric nervous system is essentially another brain in your gut,” says Lancor. “Electrical activity via neurons is generated in your gut that travels up to your brain. So, when you have a sixth sense, or a ‘gut feeling,’” he suggests, “it’s actually neural activity that’s coming from that area and going to your brain.” There are thousands of different species of microbes that live inside us, on us, and around us—pretty much surrounding our entire being, he says.

“In the early 1990s, researchers discovered a second part of our central nervous system called the endocannabinoid system,” says Lancor. “It turns out that our bodies actually make their own cannabis. In breast milk, research has shown there are endogenous cannabinoids that foster connection and give babies ‘the munchies,’ so they know to suckle and connect to their mother. But a ‘runner’s high’ can actually come from endogenous cannabinoids that are made inside of us for specific reasons.”

The majority of CBD receptors are located in our gut and around our organs, says Lancor. “The majority of our hormones and substances that we make endogenously are actually made in the gut—even serotonin,” he says. “Over 90% of our serotonin is made in the gut. So I started piecing together a direct connection between the enteric nervous system and the endocannabinoid system.”

Lancor suggests that strong gut health can give athletes an edge—an intuitive ability. “We think it has something to do with this connection to our ‘second brain.’ We call it balancing your brains.” 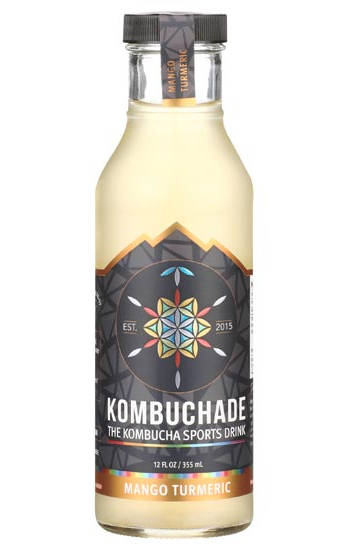 Growth of Kombuchade has come quickly. “We’ve grown 100–150% year over year since we started,” says Lancor.

This tremendous market response has Lancor thinking about what’s next. “We’re going to be looking for our next manufacturing space to buy in the next 12 months or so,” he says.

Lancor is also experimenting with a cannabis barrel-aged kombucha that could see commercialization in the future.

Kombuchade products are currently carried at retailers like Whole Foods Market and Mariano’s, a Chicago-based grocery chain owned by The Kroger Co. The CBD-containing Recovery product is only sold through independent retailers and online.

For Lancor, this is just the beginning. “We have some efficiencies I can still gain. I’d like to bring in another bottling machine that will increase our output and decrease our labor,” he says.

But the big vision is helping foster the next wave of nutritionally improved, clean-label sports drinks. “There’s a real opportunity to be an actual functional beverage that tastes good and actually helps athletes perform better,” says Lancor.

Lancor is also interested in opening a Kombuchade taproom with a café, as well as some type of performance and recovery center to host athletes for workouts. Then they can enjoy post-workout recovery via a sauna, an ice bath, and some Kombuchade Recovery to help balance their brains—and possibly take their performance to the next level.

Cannabis Product Development: The Tip of the Iceberg