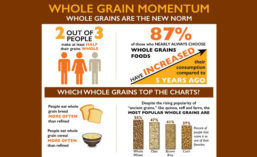 Most Americans Make Half Their Grains Whole

Whole Grains Council survey reveals whole grain habits
Now here’s some good health news: Nearly two-thirds of Americans say they are heeding the Dietary Guidelines advice to "make at least half your grains whole,” with the majority of Americans eating more whole grains than they did five years ago.
Read More

March 2012 Abstracts
Teens are not consuming enough whole-grain foods, according to a recent study from the University of Minnesota at St. Paul, featured in the January 2012 issue of Food Nutrition & Science. The study analyzed adolescents aged 12-19 in the “National Health and Nutrition Examination Survey” (NHANES, 1999-2004); it found less than one third of teens consumed more than .5 whole-grain ounce-equivalents per day.
Read More
Subscribe For Free!
More Videos