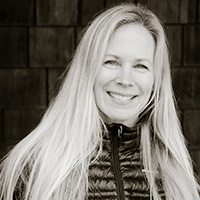 Birgit Cameron is the Head of, CA-based Patagonia Provisions, a division of Patagonia Works, founded in 2012 by Patagonia founder/owner Yvon Chouinard and Patagonia former CEO Rose Marcario. Patagonia Provisions was created as a way to broaden Patagonia’s environmental mission by partnering with forward-thinking farmers, ranchers and fisherman and offers a variety of regeneratively sourced organic food.

In 2016, Birgit produced Unbroken Ground, an award-winning documentary detailing the critical role food plays in solving the environmental crisis. Later that year, working closely with The Land Institute, she introduced Patagonia Provisions’ Long Root Ale, the first beer made with a perennial grain called Kernza. In 2018, she worked as part of a larger Patagonia effort to establish the Regenerative Organic Alliance (ROA). ROA is a new high-bar organic certification that includes optimizing soil health to sequester more carbon, and values animals' and workers' welfare. Under Birgit’s leadership, Patagonia Provisions has become a recognized leader in the organic food movement.

Birgit lives in Marin County, CA, with her husband and their two daughters.