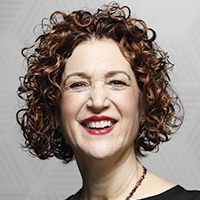 Cynthia Tice got her start in the natural foods industry before green juice was cool. She opened a natural foods grocery store, Center Foods, in Philadelphia in 1978, and owned and operated that store for 20 years. As supermarkets realized the staying power of natural and organic foods, Tice began consulting retailers on how to launch or build out their natural and organic offerings. She also began advising emerging brands looking to bring their products to market. In 2011, Tice recognized the opportunity for BFY Low Sugar products, and began to work on a recipe for chocolate, her favorite food. She launched Lily's Sweets at Whole Foods stores nationwide in March of 2012. . Today, Lily's Sweets remains a leader in the no added sugar movement.
Cynthia stepped away from the daily running of Lily’s in 2018, which was later purchased by Hershey’s in June 2021. She spends her time working with Nonprofits, mentoring young entrepreneurs, and savoring time spent with family and friends.

Here’s an entrepreneurial innovation story set in Philadelphia! Cynthia Tice opened her own natural foods store, Center Foods, in Philadelphia, in 1978. Later, by 2003, she was determined to kick sugar—but not her love of chocolate. Those passions eventually led her to co-found Lily’s Sweets in 2010. By 2017-2018, Tice realized she needed capital and help and turned to equity investor VMG Partners, San Francisco. That led to Lily’s move to Boulder, Colo., where industry veteran Jane Strode Miller became CEO and Cynthia remained involved with innovation and the brand’s mission. Last June, The Hershey Company officially acquired Lily’s for its better-for-you portfolio.

Listen and learn as Tice shares stories and insights, successes and challenges … around growing the Lily’s brand through continued innovation and iteration! Tice also mentors growing natural and organic food companies in her role as a board member of Naturally Network, Boulder, CO