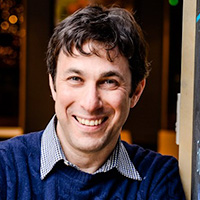 Josh Resnik has spent over two decades in the food industry, and the last six and a half years as CEO of Twin Cities Co-op Partners (TCCP) – one of the leading food co-ops in the country. In his role at TCCP, Josh oversees four natural/organic food businesses based in Minneapolis – two grocery stores (Wedge and Linden Hills Co-ops), a food distributor that serves a seven-state area (Co-op Partners Warehouse), and a food production business that sells prepared foods and bakery items wholesale, as a Caterer, and at the Wedge Table – a mini market and café. In his role, Josh works closely with many up and coming local vendors in helping them prepare for retail, grow their in-store presence, and start up with a distributor. TCCP’s mission is “Build community by developing a strong local food system.”

Outside of work, Josh serves as a judge in the Food and Agriculture Division for Minnesota Cup – the largest statewide startup competition in the US. He has also been a speaker on natural foods trends at a couple Project Nosh conferences. Josh serves on the board of Mill City Farmers Market, and was previously a board member of Midtown Global Market and Twin Cities Taste of the Nation. Josh has also done consulting for a number of growing natural food companies.

Prior to running TCCP and the Wedge, Josh was CEO of Wild Idea Buffalo, a grassfed meat company based in Rapid City, South Dakota. Before that, he spent 13 years in marketing and general management at General Mills – working on American icon brands like Cheerios, Yoplait, and Betty Crocker. He helped lead two $50+ million startups of new products at General Mills. He received an MBA from Harvard Business School with a focus on general management and marketing. Josh is also a passionate foodie, who loves exploring new cities and finding the best BBQ, tacos, or hole-in-the-wall markets.