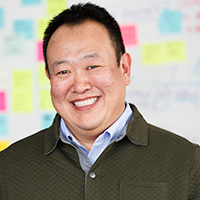 Chef Kang received his bachelor’s degree in Soil Science from University of California Riverside. He is a graduate of The Culinary Institute of America, and holds a Master degree in Food Science from the University of Illinois Urbana-Champaign. He was trained at French Laundry, one of the top restaurant in United States, serving as sous chef for Chef Thomas Keller.

Chef Kang is currently the Culinary Ninja at Tyson Innovation Lab. His work has won two Spirit of Innovation award from the Prepared Foods Magazine, as well as the Smartest Sustainable Product 2018 from Time magazine. He holds multiple patents from the United States Patent office. Chef Kang is an avid butcher, a life-long charcuterie enthusiast, and always has some sort of dry-aging meat hanging somewhere in the basement.