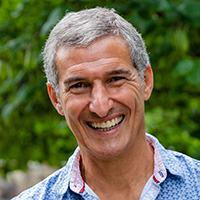 Seth Goldman
Co-Founder & CEO, Eat The Change
Co-Founder, PLNT Burger
Chair of the Board, Beyond Meat

Seth Goldman is Co-Founder of Eat the Change®, a chef-crafted brand that helps people “Snack to the Future™” with chef-crafted, planet-friendly foods. Eat the Change® recently launched a line of organic mushroom jerky and a vegetable-based kid-friendly snack. Seth and his co-Founder, Celebrity Chef Spike Mendelsohn are also co-founders of PLNT Burger, a plant-based quick-serve restaurant that offers delicious burgers, sandwiches, fries, and soft-serve.
Seth is also the Co-founder of Honest Tea and Chair of the board of Beyond Meat. He has been widely recognized for his entrepreneurial success and impact, including Ernst & Young’s Entrepreneur of the Year in Greater Washington, the Washington DC Business Hall of Fame, Beverage Industry Magazine’s Executive of the Year and Partnership for Healthier America’s CEO of the Year. Seth and his wife, Julie Farkas, have also launched ETC Impact, which is a donating $1.25M over three years into non-profit organizations that educate and inspire consumers to make climate-conscious choices with their diet.
He is a graduate of Harvard College (1987) and the Yale School of Management (1995) and is a Henry Crown Fellow of the Aspen Institute. Seth and Barry Nalebuff are the authors, along with graphic artist Soongyun Choi, of The New York Times bestselling comic book, Mission in a Bottle.

What’s Next in Functional Foods/Ingredients

Often the most inspired business innovation comes from outside the business realm. It comes from real life and real need demonstrated in other areas. One example came from lawyer and political ethicist-activist Mahatma Gandhi who said, “Be the change you wish to see in the world.” Applying that same passion and purpose are Seth Goldman and Spike Mendelsohn, co-founders of Eat the Change, a planet-friendly snack company with a mission to “create chef-crafted and nutrient dense snacks that are kind to the planet.” Goldman co-founded Honest Tea (championing healthier beverages, organic farming and fair trade) and since has gone on to also serve as chairman of Beyond Meat. He and Mendelsohn, a celebrity chef, also co-founded the growing restaurant chain PLNT Burger. Listen and learn as Goldman and Mendelsohn sit down for a moderated discussion about where insights and innovation meet purpose and palate-pleasing flavors.