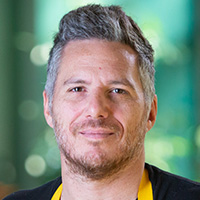 Chef Spike Mendelsohn is Co-Founder and Chef of Eat the Change®, a platform to inform and empower consumers to make dietary choices aligned with their concerns around climate and health. A nationally recognized chef and restaurateur, as well as Bravo’s Top Chef Fan Favorite, Spike has always been passionate about how food impacts our country and the world. He has worked with organizations including CARE, DC Central Kitchen, Food Rescue US and Food Policy Action to advance food equity and education, and serves as the first chairman of DC’s Food Policy Council. He brings this passion and experience to his role at Eat the Change™.

Chef Spike has always had a love of nature and an interest in environmental causes, but it was a chance meeting with Seth Goldman, Co-founder of Honest Tea and Chair of the board of Beyond Meat, that provided this activist-minded chef with his most passionate project to date - Eat the ChangeTM. At ETC, Chef Spike is focused on launching businesses that make climate-friendly foods delicious, fun and accessible. Seth and Spike’s first collaboration was PLNT Burger, a fast-casual restaurant concept where Spike offers up some of America's favorite foods free of animal products, without compromising flavor or experience.

Chef Spike is a graduate of the Culinary Institute of America and has worked with some of the world’s most renowned chefs and restaurateurs during his nearly three decade career. From chef and restaurateur to television personality, product developer and consultant, Spike is a force to be reckoned within the culinary world.

What’s Next in Functional Foods/Ingredients

Often the most inspired business innovation comes from outside the business realm. It comes from real life and real need demonstrated in other areas. One example came from lawyer and political ethicist-activist Mahatma Gandhi who said, “Be the change you wish to see in the world.” Applying that same passion and purpose are Seth Goldman and Spike Mendelsohn, co-founders of Eat the Change, a planet-friendly snack company with a mission to “create chef-crafted and nutrient dense snacks that are kind to the planet.” Goldman co-founded Honest Tea (championing healthier beverages, organic farming and fair trade) and since has gone on to also serve as chairman of Beyond Meat. He and Mendelsohn, a celebrity chef, also co-founded the growing restaurant chain PLNT Burger. Listen and learn as Goldman and Mendelsohn sit down for a moderated discussion about where insights and innovation meet purpose and palate-pleasing flavors.