Brewed Tea, Pure and Simple: Formulate Your Success with a Clean Label 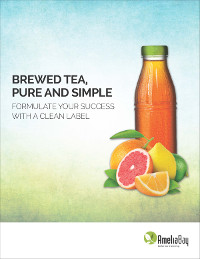 Amelia's Bay newest white paper, "Transform Your Tea: Balancing the Perfect Brew," gives beverage manufacturers a thorough understanding of how brewed tea characteristics and label claims both factor into the success of their RTD iced tea products-especially significant since tea's popularity is growing as quickly as its list of health benefits. The paper highlights the importance of ensuring that the characteristics of brewed tea, like authentic taste and appearance, shine through in the final formulation, so that all label claims-real-brewed, functionality and clean-label-can be met.

Delivering clean label products on an industrial scale can be challenging, from processing and transportation to storage and preparation. To achieve success, it’s crucial to choose clean label functional native starches that deliver excellent texture, quality and stability. In this white paper, you will learn about novel clean label stability solutions, including how functional native starches perform in terms of stability in different applications and storage conditions.

To a Tea: Building a Better Iced Tea

Amelia Bay announces the publication of a new white paper: “To a Tea: Building a Better Iced Tea,” written to assist beverage manufacturers in making the proper decisions when it comes to formulating RTD iced tea. The paper examines the current RTD iced tea landscape and consumer trends, provides a primer on types of brewing tea bases and perhaps most importantly, offers pertinent questions brewing manufacturers should ask themselves about their end goals before they enter this growing market.

In five to seven years, 35% to 40% percent of teens will be Hispanic according to the U.S. Census. The Hispanic population is growing in every metropolitan area in the United States. This—along with the popularity of Hispanic authentic flavors—can pose some formulation challenges on a larger scale. Flavorchem offers insight on maintaining flavor authenticity on an industrial scale.

It’s said “too many cooks spoil the broth.” Yet today’s reality is that two heads often are better than one—and that adage applies to processors developing anything from soups to stand-up pouch entrees.

It might not be apparent in annual capital expenditure and construction reports but food ingredient suppliers are investing millions in new R&D labs and culinary centers. While food and beverage manufacturers trim research personnel and channel funds elsewhere, suppliers are stepping up to support the next generation of new product launches.

Come take a peek at some of the best and newest facilities that create an environment for rapid product development, an environment of marketplace success and keep that energy and exhilaration alive.

In fact, according to the 2013 International Food Information Council “Health and Wellness” annual survey, 93% of consumers prefer to see familiar ingredients (such as eggs) on food labels. As a result, food manufacturers are more aware and discerning about the ingredients on their product labels.

This exclusive digital feature explains how, as part of better-for-you formulating, food scientists can use dairy flavors to improve taste while at the same time keeping foods economical and convenient-all important qualities for the busy, yet health- and price-conscious consumer.

The Secret's Out of the Shell

This exclusive feature from Prepared Foods highlights the recent findings that eggs and egg ingredients are lower in cholesterol and higher in vitamin D content than previously recorded. Rich in choline, lutein and zeaxanthin, and key in boosting the nutritional properties of gluten-free foods, eggs continue to score big as a functional, nutritional, natural ingredient choice.


Due to their nutritional and functional benefits, whey protein ingredients expand the possibilities to formulate protein-packed foods and beverages that consumers demand.

Searching for Stability in a Volatile Industry?

As food regulations change or rumors of change swirl through the industry, it translates into far morethan a simple label adjustment, especially when you add in the subsequent formulation and equipment considerations.

Companies need to maintain product texture, taste, appearance and ultimately cost in order to retain customer loyalty as they face each individual reformulation challenge. Sorting it all out can keep an R&D department tied up in knots for months.

For several years now, companies operating in the processed foods industry have sought to increase growth and profits via the well-tread, well-proven path of improving production efficiency, with good reason. Tweaking manufacturing and supply chain processes or implementing more advanced ERP or MRP systems have generally resulted in improved margins in this competitive business.

Historically food product development occurredwithin the firm boundaries of a company’s research and development department. Many manufacturers and suppliers continue to operatewith such a business model. However, there’s increasing attention to the concept of “open innovation,” a term coined in 2003 by Henry Chesbrough, a professor at the University of California-Berkeley.

Eggs can do that, too!

Some say fire is mother nature's way of cleaning up the forest, ridding the environment of superfluous elements. This parallels financial recessions, which encourage a reduction in clutter and a return to basics. Indeed, today’s consumers are looking for ways to purify and simplify, and they’re starting with their diet.

Garlic: The Root of it All

Follow your nose. En route to Gilroy, California, the 'garlic capital of the world'' you’ll smell this litt le bulb before you see it. Just stroll past an Italian restaurant and you can't miss its piquant aroma. Th e fl avor it lends is unmistakable and essential in everything from classic American comfort food to all kinds of multi-cultural cuisine.

It started in the fertile ground and mild climate of the West coast, an ideal scenario for garlic plants, with the ‘softneck’ variety predominant in California. Gilroy opened with a processing facility of just 20,000 square feet, completing its first production run on October 17, 1959. Back then, the distinctive papery white bulbs were sorted by hand and Gilroy concentrated on processing dehydrated garlic.

A Taste of the Future

Although only recently accepted into the international food lexicon, umami, the fifth taste stretches back into the annals of food history. Many popular foods and seasonings evoke the umami taste, although it remained unidentified in a scientific sense.

Comfort foods - every country has them. And while gender and cultural differences exist, almost universally a comfort food evokes pleasant memories. Comfort foods help soothe anxiety and stress while satisfying a deep longing for a return to simpler times.

Every day, 11,000 baby boomers turn 50, and many thousands more are reaching retirement age. However, this generation anticipates experiencing a different style of retirement than their parents before them. As that tidal wave of marketing influence, the baby boom generation, starts to reach age 65 and older, food processors and manufacturers need to consider the nutritional and health needs of an aging population that is redefining the “senior years.”

Q: What is the NuVal Nutritional Scoring System

A: The NuVal System translates the nutritional value of a food into an easy-to-understand 1 to 100 score. Over time, the systems will score all food products in the store - fresh and packaged, branded and private-label.

The versatile egg and its associated products have proven their versatility and multi-functionality in a number of formulations but perhaps no more so than in gluten-free foods, an emerging trend whose products benefit from the egg's ability to mimic the structure gluten provides.

More consumers are looking to follow the dietary guidelines to reduce the amount of sodium in their diet, and the market is responding. Innophos offers an innovative solution to subtract sodium from meats, baked good and cheeses.

Egg products can add a clean or netural flavors and feature a fuctional profile that can assist in creating reduced-sodium and other formulations.

The versatility of eggs, a wholesome ingredient that provides a wide range of benefits in product formualtions, has led to their use in a variety of new products, from indulgent foods to sports enhancement products.

Antioxidants are gaining prominence in a multitude of products. While most consumers know antioxidants are “good for them,” which ingredients are beneficial and why remain a mystery. New classification systems, further research into antioxidant properties and the ability to make claims will help inform the public.

Flax use up as health benefits better realized.

The Truth About Omega 3: Get all the Helath Benefits of EPA and DHA from Fish Oil ... the Best Source of Omega - 3!

Health researchers have shown increased interest in Omega-3 for decades.First, the dietary supplement industry and, now, the food industries have caught on to the idea that food products containing Omega-3 are a significant marketplace opportunity.

The retail packaged foods and beverage industry is roughly a half trillion dollar business. To succeed in this very competitive arena, food companies must develop and market products that appeal to today’s consumers.

American consumers are seeking novel flavors and tastes. Manufacturers are responding with interpretations of well-known dishes and new creations. Prepared Foods’ exclusive flavor survey examines the trends expected to impact formulators and manufacturers the most.

Kids are notorious snackers. Marketing to kids,rising childhood obesity rates and on-the-go lifestyles challenge manufacturers to develop and promote products that satisfy both kids and parents.

As the outlook for cereal bar growth blurs, the future hinges on hitting ample target markets with relevant, multi-dimensional products.

Despite lagging sales and lack of FDA approval for health claims, the soy industry is far from giving up. Recent innovations promise to revitalize and reinvigorate consumers’ interest in soy-based products.

Chocolate lovers are certainly not afraid of the dark, and sour flavors are driving sales of confections for adults and children. The candy market continues to grow, capitalizing on the latest trends and benefiting from a number of ingredient innovations.

Natural, Any Way You Slice It

Responding to foodservice consumers’ demands for a wider selection of natural items, Hormel Foods implemented a new technology to present a natural line of sliced meats and, in the process, displayed the teamwork and innovativeness that were key to its 2006 Spirit of Innovation Award—Foodservice.

Foods with functional benefits have emerged as a key market for manufacturers in recent years, as timestruggling yet health-conscious consumers seek a quick, convenient means to maintain their overall health. Functional foods would seem to fit the bill perfectly; however, manufacturers be warned: consumers may not embrace claim-touting new products.

A growing number of American consumers are pursuing active lifestyles, participating in sports and receptive to foods and drinks that help them get the most out of their physical regimen. However, their attitudes to these foods and beverages are as different as their motivations for physical activity.

Using the right sweetener or combination ofsweeteners is key in product success. Potency is affected by other sweeteners and factors such as temperature, viscosity, pH and the medium the sweetener is used in.