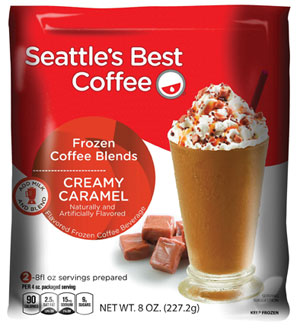 Seattle’s Best may be entering its second decade under the auspices of Starbucks, but the brand is seeing its fortunes and, likely, mass-market awareness rise to unprecedented heights. Following a rebranding effort begun in 2010, Seattle’s Best is—if not exactly thriving—seeing increased visibility among consumers.

Second from Seattle’s Best is an effort to expand the brand in made-at-home options. In partnership with Inventure Foods Inc., the brand will appear on a line of frozen coffee drink mixes. Also made with 100% Arabica coffee beans, the line will include such flavors as coffee, caramel, vanilla and mocha. Found in supermarket freezer sections, each serving promises 130 calories when blended with skim milk.