Energizing foods are under FDA scrutiny. 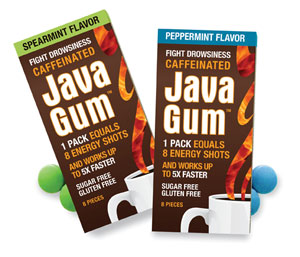 The controversy surrounding energy drinks continues to gather steam, and other energizing foods are getting caught in the wake. Wrigley, in fact, removed its sugar-free, caffeinated gum from the market after the FDA announced an interest in examining caffeinated products more carefully.
Now, a new caffeinated gum is coming to stores. Java Gum, from the company of the same name, promises 65mg of caffeine per piece, but it does promise a few differences from the Alert product. Stacey Pittman, Java Gum’s vice president of sales, explains his product has a packaging with rich, brown coloring, unlike the bright graphics and colors of Alert, which some argue lures younger consumers. Java Gum, on the other hand, targets adults in need of an energy boost.
KEYWORDS: Caffeine java