New dairy launches are taking advantage of a nutritional halo as well as increased awareness of dairy’s potential. 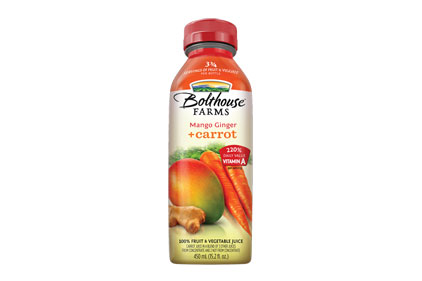 Superfruits and vegetables are high on the list of heart-healthy foods, and a recent launch from Bolthouse Farms incorporates both in a host of new juices and beverages.
Multi-V Goodness Smoothie is a grab-and-go, cherry-flavored smoothie with many of the nutrients consumers would seek in a multivitamin, including folate and 100% of the daily value of vitamins A, C, D, E, K, B6 and B12, as well as thiamin, riboflavin, niacin and biotin. Each serving also promises 8g of fiber in its blend of red fruits and berries, including cherries, strawberries, raspberries and pomegranates.
Inspired by the carrot juicing trend, Bolthouse Farms has introduced Mango Ginger + Carrot smoothie drinks. Each serving delivers almost four servings of fruits and vegetables, plus 220% of the daily value of vitamin A and 80% of the recommended vitamin C.
Bolthouse also has ventured into coffeehouse territory with its Salted Caramel Latte, which promises to be an energizing, convenient coffee fix that “also can be used as a pre- or post-workout boost for consumers with active lifestyles.” Each 8oz serving offers 7g of protein, 660mg of potassium and 30% of the daily value of calcium, in 130 calories. The beverage mixes rich Arabica coffee, caramel and a hint of real sea salt. 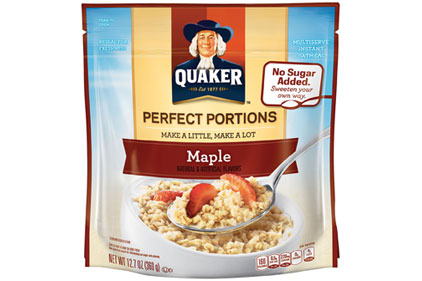 America’s obesity crisis has spawned numerous products, plans and approaches to stem the tide of over-eating. One of the major strategies has been proper portion control, and a launch from Quaker Oats assists consumers looking to get just the right amount of oatmeal.
Perfect Portions is a multiserve, instant oatmeal without added sugar. The package is resealable and allows one to select the serving size, add a sweetener and prepare with milk or water.
They come in two flavors, with 2g soluble fiber per 45g serving. 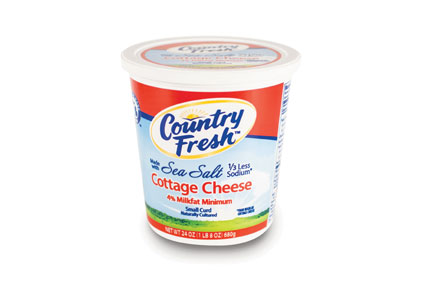 Consumers increasingly turn to sea salt and realize the health benefits of reducing sodium in the diet. In Michigan, one manufacturer has introduced the state’s first cottage cheese made with sea salt.
Country Fresh Cottage Cheese Made With Sea Salt is produced exclusively from the milk of Michigan cows and promises a third less sodium than traditional cottage cheese. The line includes milkfat levels ranging from 1-4% and package sizes of 16oz, 24oz and 48oz.
“Country Fresh Cottage Cheese Made With Sea Salt has the great taste of sea salt consumers crave, and it is lower in sodium,” says Bill Riley, Country Fresh general manager. “Our customers are looking for great-tasting products with less sodium, and this new cottage cheese delivers on both.” 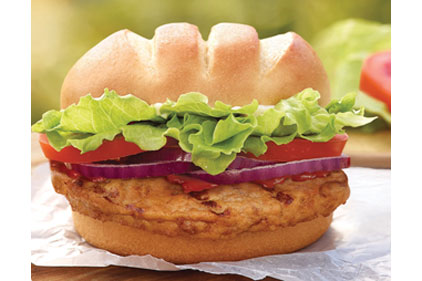 Quick-service restaurants have begun to embrace the lean protein and other health benefits of turkey. Dunkin’ Donuts, for instance, has added the Turkey Sausage Breakfast Sandwich as a permanent addition to its DDSmart menu, a range of items promising better-for-your options “without compromising taste, quality or value.”
Each item in the line meets one of the following criteria: 25% fewer calories; 25% less sugar, saturated fat or sodium than comparable fare; and/or contain an ingredient or nutrient that is nutritionally beneficial.
The Turkey Sausage Breakfast Sandwich boasts a fried egg atop turkey sausage and a slice of reduced-fat Cheddar cheese, served on an oven-toasted English muffin, all with fewer than 400 calories.
“We first introduced the Turkey Sausage Breakfast Sandwich in select restaurants earlier this year, and it was one of the most successful and well-received products we’ve ever launched,” says John Costello, president, Global Marketing and Innovation for Dunkin’ Brands.
Burger King, likewise, introduced its first take on a turkey burger for a limited time in the spring, becoming the largest quick-service chain to feature the protein on its menu. Carl’s Jr./Hardee’s have had a trio of turkey burgers since late 2010. In none of these cases, particularly Burger King’s, is the launch about calorie consciousness: the Burger King turkey burger has 530 calories, just 100 shy of a regular Whopper.

Market Watch – February 2013: Not So Limited and Healthy Growth