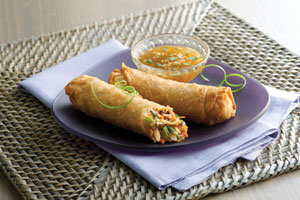 Prepared Foods discusses Asian cuisine with Jean Lee, R&D director for Windsor Foods’ Golden Tiger business. Lee studied home economics and nutrition in college (1968) and worked in her family’s L.A. Chinese restaurant. She founded Golden Tiger in 1977. The L.A. operation produces frozen Egg Rolls, Spring Rolls, Potstickers, Cha Su Bao, Siew Mai and Rangoon.
PF: What are a few of your favorite dim sum offerings? Why?
Lee: My very favorite is the Chinese barbeque pork bun, also known as Cha Su Bao. It is also the most popular snack item among the Chinese population and very popular, too, in Hawaii. It is known as manapua among the Hawaiians. This was the first product to be introduced when I started the company 36 years ago.
There also are a variety of fillings that are stuffed in this fluffy, white bun made of yeast dough that is steamed—and thus remains white as snow. There is a variety of savory fillings, such as chicken and shiitake mushrooms, curry beef, and vegetable and tofu. There is a sweet version filled with coconut and custards; many of these flavors are baked, as well.
A growing trend involves Asian sliders, which are an off-shoot of Chinese pork buns. These are made with the same yeast dough, formed into a pocket and filled with sliced pork, pickled radish with jalapeño peppers and shredded duck with barbeque sriracha sauce. Another popular variety is pork belly cilantro sliders.
PF: How have Asian foods evolved in the past few years?
Lee: In the past few years, there has been an influx of many Asians from many regions in China, creating a diversity of flavors.  Many restaurants have opened up in major cities, offering not only Cantonese food, but also dishes from other areas of China, such as Shanghai, Szechuan, Hunan and Beijing. These restaurants offer their regional specialties, many of which are hotter and spicier than the Cantonese dishes that have been around for many years.
There is now an increased awareness of these dishes, creating a demand for spicier and hotter foods.  Restaurant menus also are influenced by the Southeast Asian countries of Vietnam and Thailand, the Philippines, Cambodia and Malaysia. I’m also not forgetting the Korean influence with bulgogi, and the Japanese influence with the ever-popular sushi.
We’ve learned to eat raw fish and spicy-and-hot fermented cabbage (kimchi). We now have more to choose from and a younger, more sophisticated generation demanding more spicy and flavorful dishes. The availability of special ingredients, such as lemongrass, galangal (special ginger root), and a variety of Asian basils and hot peppers make it easier to make these dishes at home. 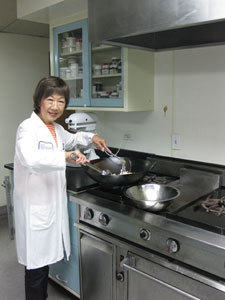 PF: What’s been happening with Asian sauces?
Lee: Asian sauces are plentiful, and the more popular sauces are trending with increased demand for hot, spicy and sweet. The most popular one that comes to mind is sriracha, which is hot, spicy and sweet, sometimes known as “rooster sauce.”  It also is used as an ingredient in other sauces, such as Subway’s [creamy] Sriracha sauce.
Other popular sauces are General Tso’s and a Korean bulgogi sauce, which also is used as a marinade.  These are sweeter sauces that include soy sauce, sesame, chili peppers and garlic. Sambal also is gaining popularity with bold and spicy notes. Apart from the Asian sauces, there are pastes and fermented beans that add another dimension to the flavor profile of a dish.
PF: What are a few of your favorite ingredients?
Lee: Bold and flavorful ingredients, such as Thai basil, lemongrass and fermented black beans, can add a bit of intrigue to any dish. I like working with these ingredients, because they wake up your taste buds. But, they must be carefully balanced with other flavoring ingredients and spices.
PF: What do you see happening with Asian pasta dishes?
Lee: Asian noodles are growing in popularity in all areas of the industry—similar to the rice bowl trend a couple years ago. Asian noodles come in many forms: fresh or dry. They include wheat noodles, rice noodles, udon and soba, and the transparent cellophane noodles.
They come in popular dishes such as pad Thai, pan-fried chow mein, pho, chow fun and Shanghai garlic noodles. Many are topped with a mixture of protein and vegetables and a regional Asian sauce, similar to rice bowls. From the beginning, Golden Tiger added a rice noodle or vermicelli in their spring rolls, and that added an interesting, favorable texture.