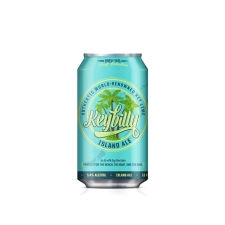 The original concept for Keybilly Island Ale was developed by home brewer Pat Kennedy in Islamorada, Florida. Kennedy grew up in Fort Lauderdale but always spent weekends with his family in the Florida Keys. Kennedy moved to Islamorada in 2009 and soon began trying to brew a beer that would perfectly suit the island lifestyle.

Kennedy began entering home brew contests, and in 2013 he began winning awards. In 2014 Keybilly Island Ale won three of four awards, including Best Overall Homebrew, Most Unique Brew, and the People's Choice Award at the Brew on the Bay craft beer festival in Key Largo, Florida. After winning the awards Kennedy approached Brew Hub about brewing Keybilly and making it available to consumers throughout Florida.

"Pat Kennedy is a passionate home brewer, and Keybilly Island Ale really took us by surprise," said Tim Schoen, founder and CEO of Brew Hub. "The beer has a nice amber hue and a medium body, and it has just the slightest hint of Key lime which makes it really stand out among craft beers. We're thrilled to have a partnership with Pat, and we're really excited to make Keybilly Island Ale available throughout the state."

"Partnering with Brew Hub is a dream come true for a home brewer," said Kennedy. "I've been working for years to get the Keybilly recipe perfected, and now beer drinkers from all over are going to get a chance to taste Keybilly, which is really exciting."

Keybilly is a slang term people in the Florida Keys use to refer to anyone who embraces the island lifestyle.

Keybilly Island Ale is 5.4 percent alcohol by volume (ABV) and will be available initially throughout South Florida in 12-ounce cans (six-packs) and on draft. Keybilly will be priced comparably to other premium craft beers, and it will be available beginning this month in bars, restaurants, grocery and convenience stores. The brand will be distributed throughout South Florida by Gold Coast Beverage Distributors. Brew Hub plans to expand Keybilly distribution to Tampa and Orlando later this year. Keybilly also will be available on draft in the tasting room at Brew Hub's Lakeland, Florida, brewery.