As cannabis-infused food and beverages gain popularity among consumers, manufacturers and brand owners face the challenge of consistently incorporating cannabis oils into their products.

First and foremost, encapsulation allows for even dispersion throughout the product, meaning consumers will get the same amount of an active ingredient, such as cannabidiol (CBD) or tetrahydrocannabinol (THC), in each bite or sip.

“You avoid situations where a sip of a drink might have you consuming most of the cannabis oil that’s sitting on top of the water layer in a beverage or, alternatively, where you consume none of that oil layer,” says Wong.

Encapsulation also improves a product’s shelf life, preventing the cannabinoid content from degrading over time and keeping the formulation stable. Courtney Maltais, lead botanist and founder, The Clear, Denver, says proper emulsions should be invisible to the naked eye. However, a product can “crash out” and a layer of precipitate can appear at the bottom of a bottle or jar. “Oftentimes, crash out can be mediated by simply shaking the substance; however, when it comes to mixing oil and water, this will not guarantee proper dispersion and dosing in the product,” she says.

There are also the concerns of absorption and onset times. Properly encapsulated or emulsified cannabinoids are believed to enter the bloodstream faster and in greater amounts. For edible consumers, that’s especially important, since feeling the effects sooner can prevent inadvertent overconsumption.

“Nanoemulsion-based products allow the consumer to feel buzzed anywhere from 2 minutes to 15 minutes after using or consuming a product,” Wong says. “This rapid onset time helps minimize overconsumption and also benefits consumers who are using cannabis for medical purposes such as pain relief.”

Depending on the product being formulated, there are three types of oil-in-water emulsions: macro, micro and nano. Key distinctions between these methods are varying levels of solubility, transparency and overall product quality, Maltais says.

Macroemulsions, which have droplets that are 1 micron in diameter, lack shelf stability due to their low solubility. They also tend to be unstable and separate into a water layer topped by an oil layer, making them unsuitable for a water-based product or beverage.

Microemulsions feature droplet diameters below 100 nanometers. These emulsions are translucent and thermodynamically stable mixtures of oil, water and surfactants, or emulsifiers. When using surfactants to make cannabis oil soluble in water, a higher concentration of surfactant is needed to encapsulate the cannabis oil.

“This isn’t ideal because surfactants can have varying side effects and can undermine the taste and quality of the product,” Maltais says. “The high ratio of necessary surfactants poses a challenge for formulators to reach the desired cannabinoid concentration without exceeding the maximum permitted surfactant levels.”

Nanoemulsions, the most widely used in the cannabis food and beverage industry, feature droplet sizes below 250 nanometers, with less than 100 nanometers being the ideal, as they are optically translucent. Additional benefits include low viscosity, high interfacial surface area and long-term kinetic stability.

Manufacturers can also turn toward liposomes, a way of encapsulating cannabinoid-rich oils with a dual layer of phospholipids, or microscopic fat particles. Liposomes are sphere-shaped vesicles that surround and protect the oil from degradation, harsh stomach acids and enzymes, and processing by the liver.

Their structure allows the cannabinoid content to get into the bloodstream quicker and more chemically intact, says Christopher Shade, Ph.D., founder and CEO, Quicksilver Scientific, Louisville, CO.  “The smaller the spherical liposomes, the easier it is for them to penetrate into the bloodstream and into the targeted cells,” he says. “Quicksilver Scientific engineers liposomes in the 20–100 nanometer range.”

Maltais added liposomes are more compatible with synthetic or isolated cannabinoids, rather than less-refined or full-spectrum oils. She says they can create slightly more shelf-stable emulsions than macro- and microemulsions.

“This process involves complex preparation procedures and very high surfactant concentrations,” Maltais says. “It still does not compete with nanoemulsions, which are equally shelf stable and far easier to produce in a standard manufacturing facility.” 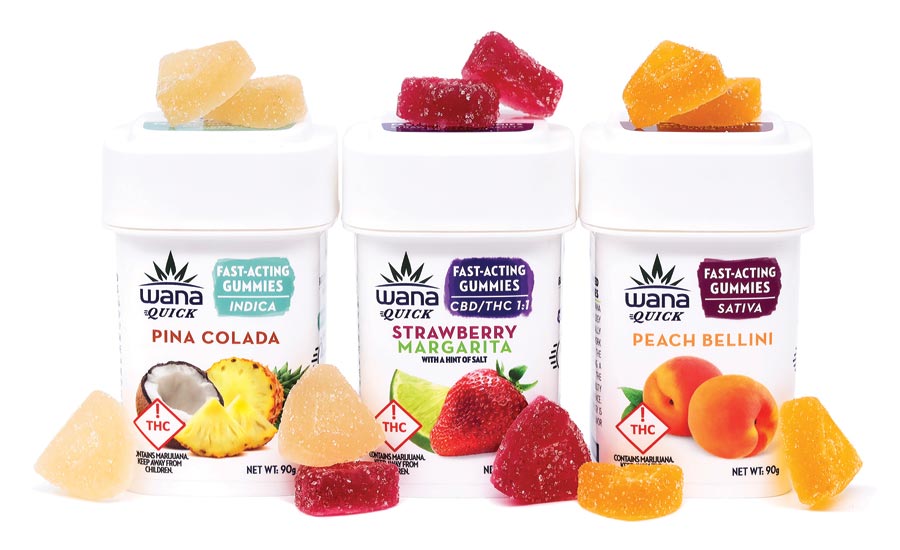 Azuca’s TiME (thermodynamic individual molecular encapsulation) infusion process enrobes individual CBD or THC molecules to make them hydrophilic, allowing for faster uptake, beginning immediately in the mouth and avoiding the gut and liver where cannabinoids are degraded and absorption is slowed. This method transforms each individual molecule into a 15 angstrom-sized particle that is processed by the body’s endocannabinoid system in minutes.

“At Wana, we saw a need for a product that could deliver a less-intense, inhalation-like experience in an edible form quickly and predictably,” says Nancy Whiteman, CEO, Wana Brands, Boulder, CO. “Wana Quick Fast-Acting Gummies more closely mirror the onset and offset time of a typical inhalable cannabis product or an alcoholic beverage, making them a unique alternative to the traditional edible experience.”

Wana Brands and Azuca first announced their partnership in October 2019, highlighting the benefits of edibles with faster onset periods.

“The partnership with Wana Brands allows us to bring our fast-acting culinary technology to a large universe of cannabis consumers for a more controlled and positive experience,” says Kim Rael, president and CEO, Azuca, New York. “We look forward to long-term growth and success.”

Quicksilver Scientific has plenty of experience with lipid particle delivery systems, but some of the supplements it works with aren’t compatible with its traditional liquid format. As a result, the company developed the patent-pending Self-Emulsifying Delivery System (SEDS), which is a solid dose soft-gel form that provides high bioavailability and absorption while avoiding some undesired flavors and staining.

“When Quicksilver Scientific utilizes the new SEDS technology, pharmacokinetic studies indicate that the softgel quickly dissolves in the stomach creating emulsified nanoparticles that easily diffuse through intestinal cell membranes into the bloodstream in as little as 20 minutes with peak blood concentration occurring within 90 minutes,” Shade says.

For nanoemulsions, Axiomm offers the µGOO precursor technology that’s compatible with a range of oils, vitamins, and nutraceuticals. Wong says it took years of reformulating and stress-testing to hone a solution that serves its customers.

SōRSE says products using its technology have an even dispersion of cannabinoids, and their effects are felt in 10–20 minutes. Products using SōRSE remain stable for roughly 12 months.

Regardless of the system manufacturers use, Wong cautioned against rushing through the R&D process just to get a product on the market. “Building a product on the back of a poor-quality emulsion can do your brand far more harm than choosing to stick to traditional oil-based products. Take your time and be sure that you’re sure the nanoemulsion you’re using is a quality one.”