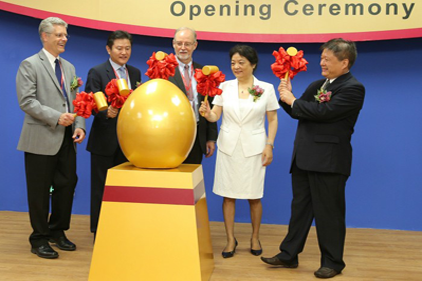 General Mills, Minneapolis, said it recently opened the company’s first innovation, technology and quality center in Shanghai, “signaling a commitment to drive greater innovation and investment in one of the company’s largest growth markets.”

Officials say the $15 million facility, spanning 75,000sqft, is the first major technical center outside of the General Mills worldwide headquarters in Minneapolis. The state-of-the-art complex will focus on snacks, convenience meals, yogurt and super premium ice cream. Inside it will house centers for product research and development, food safety, food nutrition research, and food sensory evaluation.

“Our new technical center in Shanghai provides General Mills a tremendous opportunity to accelerate innovation in the Greater China region and better support this rapidly expanding business,” said Ken Powell, General Mills Chairman and CEO. “By bringing our world-class capabilities to the region, we will increase our agility to act on emerging consumer trends, enable bigger and better innovation pipelines, and establish a food safety center of excellence for our business.”

“Our continued success in China will require consistently meeting the needs and demands of our consumers,” said Gary Chu, executive vice president and president of General Mills China. “Over the last two decades, we have built a growing portfolio of brands and products that Chinese consumers have come to love and trust. With the tremendous economic growth in China, establishing greater technical capabilities in this market is critical for our continued success.”

General Mills says China is one of the company’s largest growth markets with brands such as Wanchai Ferry dim sum, Häagen-Dazs ice cream and Bugles and Trix snacks.  Constant-current net sales for China have grown at a 15% compound rate over the past four years, reaching more than $700 million dollars in 2014.

General Mills said expects double-digit net sales growth from Greater China this fiscal year. The company also recently announced that it will expand its geographic presence for Haagen-Dazs, adding 80 new shops and entering 16 new cities in China.  The company also is preparing to enter the $8 billion yogurt category and has begun construction on a new manufacturing facility in the region.

Outside of the U.S., General Mills is focused on the middle class consumer in emerging markets to drive faster topline growth. The emerging global middle class is expected to reach 50 percent of the world’s population by 2030. Across China, Indonesia, India and Brazil, the sheer number of new middle class households is projected to grow by almost 200 million people between 2010 and 2020.

“These consumers are increasingly pressed for time,” said Chris O’Leary, executive vice president and chief operating officer, International. “As a result, this emerging middle class is looking for convenient food solutions, with strong health credentials and great taste. All of which points to a huge growth opportunity for our business going forward.”

Reasoned Opinion: Ring in the New