Here’s a case where some seemingly small numbers add up to a big trend. There are eight foods or food groups identified by US law (Food Allergen Labeling & Consumer Products Act, 2004) as major allergens. These include milk, eggs, fish, crustaceans, tree nuts, peanuts, wheat and soybeans. Meanwhile, the Food and Drug Administration estimates that about only 2% of US adults and 5% of infants and young children have food allergies.

Even so, the market for allergy-free or free-from foods has moved from a relatively specialist status to mainstream in just a short period of time. In particular, those products with gluten-free and lactose-free positions are establishing strong presence.

What are the market drivers? For starters, there simply are more high-quality, allergen-free products that deliver a good sensory experience (taste, texture, etc). Likewise, improved labeling practices make it easier for consumers to more quickly and easily identify these alternative products.

Then again, allergies and intolerances no longer represent the only reason for buying free-from foods. Many more consumers are choosing foods and beverages specifically to boost overall health and wellbeing, digestive health, weight management and/or nutritional value. Consequently, many allergen free and other “free from” products are benefitting.

Gluten-free foods have led the mainstream shift in recent years. During a 12-month period to the end of May 2017, Innova Market Insights found that more than 13% of new food and drinks worldwide used a gluten-free positioning. That figure is up from less than 6% of new product introductions back in 2012. The US—with its traditionally high level of interest in healthier options—was even more active, more than 22% of new products carrying a gluten free claim during the year ended in May 2017. That figure is up from a corresponding 13% share of claims back in 2012.

This level of US activity is clearly not just about allergies and intolerances, real or perceived. Again, its appeal extends to a wide range of consumers for broader health reasons. Meanwhile, label claims are widely featured on products that would not even normally include gluten.

Snacks did come a close second, however, with cereals and bakery in fifth and seventh places, respectively, behind sports nutrition and sauces and seasonings, with bakery also behind soft drinks. More than 40% of US snacks launches in the 12 months to the end of May 2017 carried gluten-free positions. Looking even more deeply, that percentage rises to more than 50% of new products in savory/salty snacks, meat snacks and popcorn.

In terms of product and market development, the snacks market benefits from the fact that many basic snacks ingredients—such as potatoes, corn, soy and nuts, are naturally gluten-free. So, it is a claim that is relatively easy to achieve in many instances. Ingredients used to replace wheat or other cereals and offer a gluten-free formulation have included lentils, black beans, navy beans, cassava, brown rice, nuts, sweet potatoes and a wide variety of other vegetables.

With so many products now carrying allergen claims, gluten free references now tend to take a lower profile—often being just one of a range of benefits offered by new products. As categories go, the savory snack area is noteworthy. Besides being gluten free, these new launches carry more upmarket packaging (such as pouches); a growing range of strong, exotic flavors; on-trend ingredients such as coconut, chickpeas, chia, hemp, seaweed and kale; and an ongoing focus on organic certification and protein content.

The cereal products market, encompassing breakfast cereals and cereal bars, is, like the snacks category, relatively well set up to cater to the gluten-free trend. This market also has many non-gluten cereal options available, perhaps most notably oats, already much in demand for their health benefits in terms of fiber content, heart health and slow energy release. As a result, it is perhaps not surprising that the share of gluten-free claims in the US cereals market—tracked at 49% of new product introductions—is much higher than the average of the food and drinks market as a whole.

As in snacks, gluten-free is now tending to be just one positioning for cereals launches, particularly for cereal bars, where interest tends to focus on a wide range of nutrition and health benefits. Initiatives by the major breakfast cereals companies to introduce gluten-free varieties of big brand cereals also seem to have died away. Kellogg’s Rice Krispies Gluten Free was one of the first on the market in 2011, but has since been withdrawn.

Interestingly, despite being one of the product categories most strongly associated with wheat (and thus gluten), the bakery products sector has a lower than average share of gluten-free launches recorded, at just more than 15% of the US bakery total. This perhaps partly reflects the diversity of the sector and the high levels of new product activity overall.

Rising availability and quality of gluten-free breads was one of the key features driving the gluten-free category, as it moved out of the specialist dietetic sector and into the mainstream market. Product activity continues to focus on key brands, although industry consolidation has brought some under the same ownership and some under the umbrella of major food and drinks companies.

Health and wellness specialist Boulder Brands, for example, acquired the Glutino and Udi’s gluten-free brands in 2011 and 2012, respectively, before being acquired itself by Pinnacle Foods in late 2015.

Meanwhile, natural foods specialist Hain Celestial acquired Rudi’s Organic Bakery in 2014. Foreign operators such as Dr Schar and BFree also continue to operate in the market, along with privately-owned companies such as Canyon Bakehouse, and some retailer private label brands.

Looking at launch activity during the past few months, many of these brands have been active, with bagels, pita and soft rolls from BFree; Heritage gluten-free breads from Canyon Bakehouse; multigrain hot dog rolls and hamburger buns from Rudi’s; white and wholegrain English muffins from Udi’s; and private label options from Fred Meyer and from Whole Foods under the Bakehouse sub-brand.

Use of lactose-free claims has been less popular than gluten-free, but even so, more than 2.6% of global food and drinks launches used this kind of positioning during the 12 months to the end of May 2017, more than double the 1.2% share of five years previously. This type of claim was particularly popular in Europe, where it accounted for more than 4% of launches, while the US had a slightly below average penetration of 2.3%.

Following a similar course to gluten free, the lactose-free market is trying to emerge from its specialist niche and increase its appeal to a wider mass market audience. It also is achieving success thanks to improved, better-tasting products as well as increased overall interest in dairy free and vegan options, improved labeling, and growing awareness of problems associated with lactose intolerance.

Not surprisingly, the dairy market has seen some of the highest levels of activity, accounting for more than 27% of lactose-free launches in the US. Lactose free claims factored in just more than 11% of total US dairy launches. The highest share of lactose-free products tends to be in sectors where there already are established dairy alternatives—particularly dairy alternative drinks, where the share of products marketed as “lactose-free” was more than 60%.

Spoonable non-dairy yogurts also saw significant numbers of lactose-free claims, used for more than 37% of launches during the 12-month period ending in May. As these products are all intrinsically dairy-free, many just use this positioning, rather than using a specific lactose-free platform as well.

Creamers, many of which also have non-dairy ingredients (such as vegetable fats), can also relatively easily be formulated as lactose-free and this type of product accounted for more than 30% of introductions in the sub-sector. In more traditional dairy markets, such as milk drinks and cheese, penetration of lactose-free launches was 14% and 5%, respectively, while in spoonable dairy yogurts it was a very modest 2%.

As awareness of and demand for lactose-free products has expanded, the sector has moved into new market categories, such as frozen desserts and particularly, ice cream products. Many of these options are dairy-free, however, and may focus on a lactose-free formulation as just one benefit.

Just over 2% of US dessert and ice cream launches in the 12 months to the end of May 2017 used a lactose-free positioning. Looking at recent launch activity recorded by Innova Market Insights, launches have included ice cream products such as Perry’s Lactose Free Cookie Dough Ice Cream; a range of flavored tofu-based frozen desserts under the Tofutti brand; lactose-free frozen novelties from North Star; Almond Dream Frozen Dessert Bites from Hain Celestial; and Cookies & Cream Ice Cream from lactose-free brand Lactaid (from McNeil/Johnson & Johnson).

It is clear that the market for free-from foods is poised for even more growth. This will be driven by interest spreading from those diagnosed with allergies or intolerances, to the self-diagnosed, and to those with a much more general interest in health and well-being.

The ongoing development of a greater range of products with a high-quality image and a good-taste profile is helping this along, and the increasing presence of gluten-free and lactose-free options in the mainstream food and drinks market under familiar brands from well-known companies can only serve to drive the market further forward, as can the ongoing initiatives from specialist free-from brands.

Originally appeared in the October, 2017 issue of Prepared Foods as Be Free!

By the Numbers: Plant-Based Options

In recent years there has been a lot of expansion and innovation involving plant-based dairy and meat alternatives in the US—even with dairy and animal-protein manufacturers finding ways to enter the space. However, the market’s potential is still being determined. The NPD Group, a leading global information company, believes the market for plant-based alternatives is still evolving as consumers begin to leverage these items because of food allergies or they’re seeking what they believe to be more healthful options. 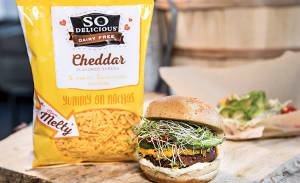 “Plant-based dairy and meat alternatives may not appeal to everyone, but today’s consumers are taking a personal approach in their pursuit of a healthy lifestyle and plant based alternatives are among the many choices at their disposal,” says David Portalatin, NPD’s vice president, industry analyst for Food and author of Eating Patterns in America.  “Expanding consumer choice and empowering them to craft their own path may provide growth opportunities for manufacturers and retailers in this space.”

Free-From Foods for All Consumers