This website requires certain cookies to work and uses other cookies to help you have the best experience. By visiting this website, certain cookies have already been set, which you may delete and block. By closing this message or continuing to use our site, you agree to the use of cookies. Visit our updated privacy and cookie policy to learn more.
Home » We Have Liftoff: Space Food Sticks Launch in Colorado's Cannabis Market
Cannabis ProductsCannabis Food & Beverage CategoriesCannabis BusinessCannabis SnacksEntering the Cannabis Market
CANNABIS PRODUCTS | JUNE 2021

Space Food Sticks—the astronaut food bars The Pillsbury Co. launched in 1969—are on a new mission that’s really out of this world.

In a pinch, energy-imbuing Space Food Sticks sustained astronauts on the 1971 Apollo 13 and 1973 SkyLab 3 missions (and curious consumers throughout the 1970s, after Pillsbury launched a version of the product into retail…). Now the product is seeing new life as a THC-infused cannabis edible, settling into orbit across Colorado’s dispensaries. 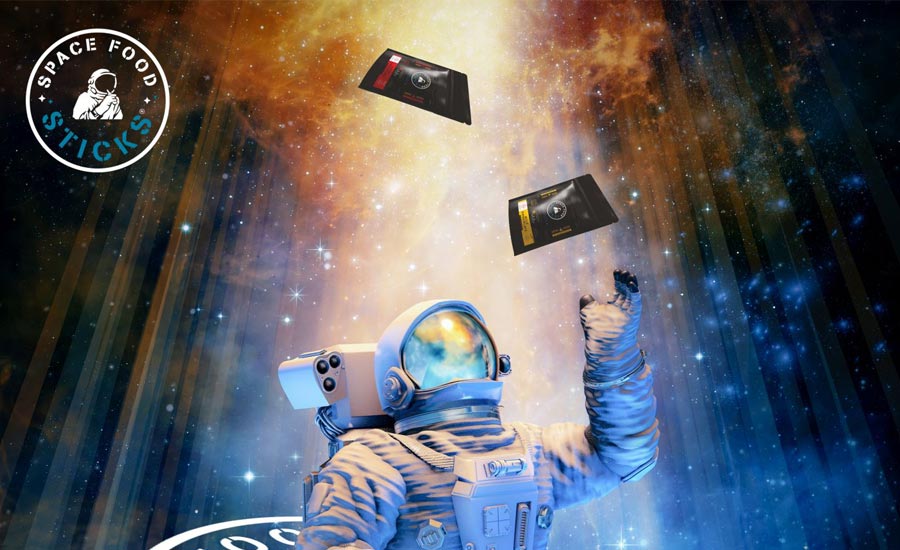 A HISTORY OF INNOVATION

In 1959, the U.S. Quartermaster Food and Container Institute of the Armed Forces contacted The Pillsbury Co. to determine its interest in collaborating on development of space food options for astronauts. One of the scientists involved with this challenge was Howard E. Bauman, Ph.D. He quickly realized that a key issue was preventing contamination while in space—a necessity for helping keep the astronauts healthy. This work led to Pillsbury’s development, in collaboration with U.S. Army Laboratories, of the Hazard Analysis and Critical Control Point (HACCP) system for NASA. Instead of reacting to food safety issues after they arise, HACCP sought to anticipate and prevent potential problems, such as microbial contamination.

After finding success with the new system at NASA, Bauman introduced HACCP at Pillsbury to improve its food safety program. FDA then worked with Bauman and Pillsbury to introduce HACCP procedures for the food industry.

As part of his work with NASA, Bauman was tasked to create an energizing food bar for space missions—and created the food industry’s first commercial energy bar in the process. Space Food Sticks, or simply “Food Sticks,” as they were later called, remained on retail shelves until the 1980s when Pillsbury discontinued the line.

“A renewed interest in Space Food Sticks peaked online in 2001,” says Eric Lefcowitz, owner, RetroFuture Products, Port Washington, NY, and author of “Monkee Business: The Revolutionary Made-For-TV Band,” a chronicle of The Monkees, among other titles. “I was a writer at the time, working on a story for AOL about ‘futuristic food products’ that we’d all grown up with, but which had disappeared from supermarket shelves.” After the story was published, he began receiving calls from passionate consumers who had grown up with Space Food Sticks wanting to know where they could buy them.

“The nostalgic attention was so overwhelming that I founded The Space Food Sticks Preservation Society, bought the trademark, found a co-manufacturer, and relaunched Space Food Sticks back into existence in 2006,” says Lefcowitz. “For a period of time, they were sold in gift shops across the U.S., including the Kennedy Space Center, the Smithsonian National Air and Space Museum, and chains like Urban Outfitters.”

But in 2016, the program hit a snag when the Space Food Sticks co-manufacturer was acquired, and the new owners decided to discontinue production. But Lefcowitz wasn’t ready to retire the idea.

While pitching Space Food Sticks to the media, a reporter from Vice asked Lefcowitz about the next step for Space Food Sticks (“Inside the rise, fall, and stoner rebirth of ’70s space food,” Oct. 8, 2016). Not ready to abandon the idea, Lefcowitz made an off-the-cuff comment about launching the sticks into the cannabis world, a market that immediately seemed like a natural fit. 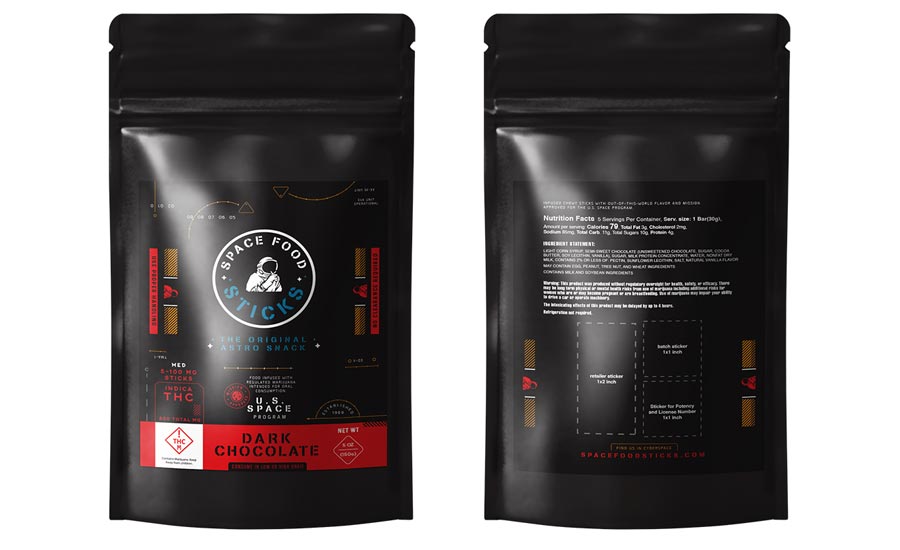 THE RACE TO SPACE

But there was one big problem: Lefcowitz had zero experience with cannabis. The difficult search for a professional partner experienced with brands, consumer packaged goods, and cannabis had him considering the idea of aborting his mission.

But then the search led Lefcowitz to Steffen Weck, COO of The Vivid Team, based in Denver, a full-service cannabis-licensed product development and branding company established in 2015 that combines the rigors of food science, engineering, and culinary creativity.

When Weck received the inquiry, he instantly had a nostalgic connection to his memory of Space Food Sticks. “I remember having those in our pantry as a kid,” he says. “My mom was a teacher and had very little time to make lunch for me on her way out the door in the morning. I remember kids at school being jealous when I’d take them out of my lunchbox.”

Weck, who is also CEO of Food Business Consulting, has led the development of hundreds of successful retail, foodservice, branded, and private label product introductions for many of the top-50 U.S. food manufacturers over the course of his career.

The Vivid Team, in collaboration with RetroFuture Products, is now launching THC-infused Space Food Sticks in Colorado during summer 2021.

“The consumers who remember Space Food Sticks are primarily baby boomers who are now struggling with aches and pains and the challenges of falling asleep at night,” says Jessica Cristadoro, CEO, The Vivid Team. “Many are looking to cannabis as a possible solution, but they’re nervous for a variety of reasons. Seeing a familiar brand that they remember from their childhood—and that also has the potential medicinal benefits that cannabis offers—can certainly ease their apprehensions.”

Space Food Sticks is traveling in uncharted territory. “This will mark the first federally trademarked legacy brand and product to enter the cannabis space,” says Weck. “You could say it’s one small step for edibles and one giant leap for the cannabis industry.” 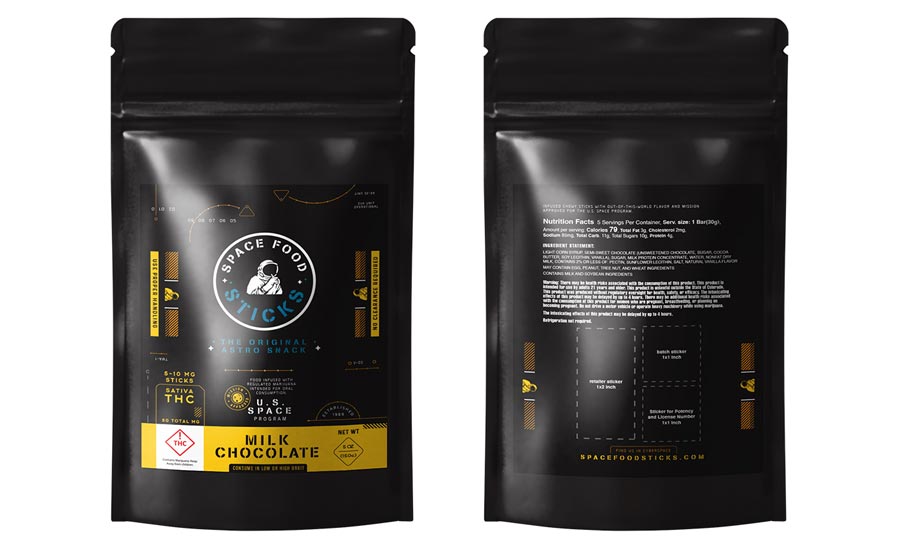 Development of Space Food Sticks entailed a savvy bend of core competencies courtesy of The Vivid Team, with Cristadoro taking the lead.

Cristadoro is well versed in intellectual property, research and product development, regulatory compliance, and due diligence after spending much of her early career at companies like Dawn Food Products and Sara Lee, leading food product development efforts.

When Cristadoro first began learning about cannabis, she found edibles sometimes lacked a consistent experience. “Efficacy and onset experiences varied—one bite had a huge effect, the next had none,” she says. “Whether it was one portion cut in half or two pieces of product from one bag, the uniformity was consistently lacking.”

This creates issues with customer satisfaction. After all, a product’s first—and second—impressions are vital to encouraging repeat purchase.

But Space Food Sticks has crossed that hurdle. By employing nanoemulsion and liposomal technologies, among other formulation techniques, Cristadoro and The Vivid Team developed numerous proprietary processes to directly tackle product homogeneity, cannabinoid bioavailability, and onset.

“Liposomal technology is beneficial for cannabis in a couple of ways,” says Cristadoro. “Liposomes are spheres that encapsulate the cannabis and are both hydrophilic (water-loving) and lipophilic (fat-loving). The lipophilic piece is the most important, as it likes to be connected to the cannabis oil.” This helps the liposomes easily cross the cell membrane into the user’s system, she says. 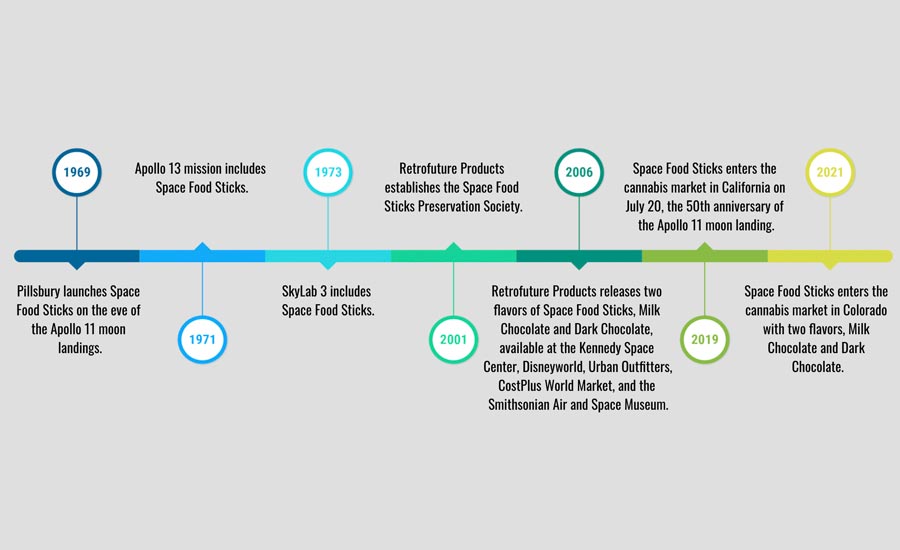 This equates to better bioavailability and more-effective products, says Cristadoro. “The liposomes carry the cannabis further into the body, and you get all of the cannabis in your system versus losing some of the effective ingredient through metabolism.” Liposomal technology can facilitate faster onset. “Liposomes can also be tailored to be time-released,” she says.

Consistent process repeatability is essential for tight dosage control to maintain stated levels of cannabinoids on product packaging. “When you’re manufacturing a chocolate chip cheesecake, nobody’s going to complain if the chocolate chips in their cheesecake aren’t perfectly distributed per serving. It’s process variability. But in the cannabis industry, homogeneity is paramount,” says Weck.

To help grow the industry, The Vivid Team is creating a cannabis-licensed “EpiCenter” accelerator in Denver equipped with a variety of product development resources. “The EpiCenter will be the first of its kind, bringing together all of the professional elements in a collaborative environment,” says Weck. Competencies include concept development, research, development, manufacturing, sourcing, and commercialization.

“Traditionally, to bring a new product to market from ideation to store shelves in the food and beverage industry, you’re looking at a 12–18 or 18–24-month timeline,” says Weck. By putting multiple stakeholders under one roof, the EpiCenter seeks to streamline the process.

“You could say our new EpiCenter is a new mission control for cannabis,” says Cristadoro.

Partners already involved in the EpiCenter project include: 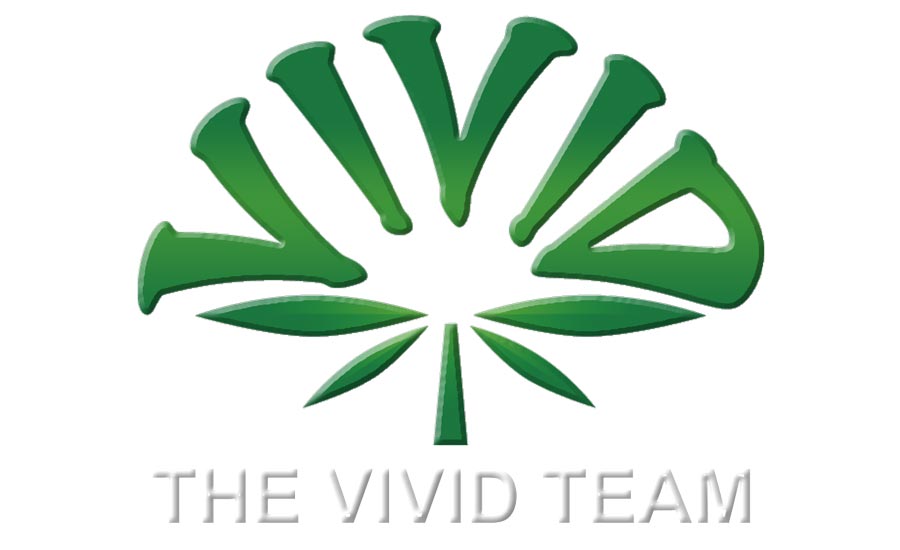 Space may be the final frontier, but it’s growing more accessible all the time. Weck suggests it might be fitting for Elon Musk to bring some of the new cannabis-infused Space Food Sticks on one of his upcoming SpaceX flights (although the regulatory parameters of space are a bit nebulous...).

Weck also notes more R&D missions are in the works. “In addition to launching Space Food Sticks, we’re in the process of developing an entire line of space-oriented products under the Space Food brand,” says Weck, noting details will be forthcoming. “I guarantee they’ll be out of this world.” Pioneering in the cannabis foodservice market

Seeking Financial Security in the Cannabis Food and Beverage Industry