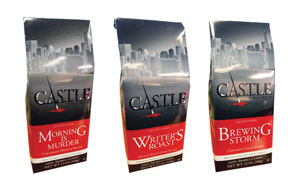 Similarly paying heed to a star of the South, Chattanooga Bakery Inc. is working with White Coffee Corp. to introduce a line of MoonPie-inspired flavored coffees, in such options as chocolate, vanilla, banana and mint. (MoonPies, it should be noted, are a Southern treat with two round graham cracker cookies and a marshmallow filling that is dipped in chocolate, vanilla or banana.)

Not all of White Coffee Corp.’s efforts draw inspiration from the South, however. For that matter, a more recent introduction is based entirely on a work of fiction. Castle Coffee Blends draws inspiration from the television show Castle, with such varieties as Morning is Murder (a bold Columbian roast), Writer’s Roast (a dark French roast) and Brewing Storm (a lighter-bodied coffee with the flavor of cinnamon).

White Coffee ‘Coffees of the World’