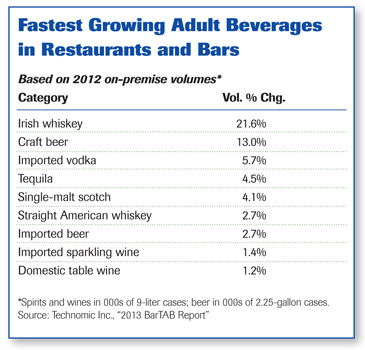 What do restaurant and bar patrons think about adult beverages? Do their actions reflect their attitudes? By all accounts, the glass is more than half-full, says foodservice researcher Technomic Inc. The Chicago researcher has been surveying consumers and studying actual restaurant and bar sales. Last fall, Technomic released as many as three new reports on adult beverage trends.

“These restaurants provide a place where consumers can relax and enjoy an adult beverage, and, in turn, this simple hospitality influences the consumer’s perception of the whole experience,” says Donna Hood Crecca, senior director of Adult Beverage Resource Group at Technomic. “It’s important for restaurant operators to nurture that experience, and when feasible, to extend this hospitality even before the customer is seated at a table. In fact, customers who enjoy a drink while waiting for a table report the highest satisfaction with their visit than any other group.”

In a separate study, Technomic finds premium adult beverages providing momentum to the on-premise channel despite cautious consumers. Higher-priced spirits and beer categories, in particular, are growing in restaurants and bars, although the channel is slowing overall. According to Technomic’s 2013 “BarTAB Report,” on-premise sales of spirits and beer grew in total volume (0.7%) to reach 1.9 billion gallons and sales rose 3.5% to $97.3 billion in 2012. Projections call for slight declines in volume in 2013 and 2014—but continued dollar growth.

“Two seemingly opposing trends are at play,” notes Eric Schmidt, director of research at Technomic. “The slow economy and a level of uncertainty have some consumers reducing their visits to, or spending in, restaurants and bars, while at the same time their interest in more complex flavor experiences is prompting them to continue exploring more expensive products, such as single-malt Scotch, imported vodka and craft beer. It’s reminiscent of the ‘drinking less but drinking better’ trend of the early 1990s.”

One quarter of total alcohol volume and half of sales occur in the on-premise channel, which includes restaurants, bars, nightclubs, hotels, casinos and other locations licensed to serve drinks. Beer remains the largest category in both volume and dollars. Following a decline in 2011, beer expanded in volume in 2012—but the major domestic categories are continuing to decline in 2013.

Spirits was the fastest growing alcohol in restaurants and bars, expanding 1.9% in volume and 5.6% in dollars in 2012. Wine’s growth trajectory is slowing overall; but, the largest segment, domestic table wine, is posting ongoing gains.

Spirits, wine and beer appear to be competing more directly for on-premise occasions; in particular, for Millennial consumer drink purchases has increased.

Speaking of Millenials, Crecca adds: “Their adult beverage portfolio is broad and varied – Millennials are driving many of the trends occurring in spirits, wine and beer, including the growth of premium and above-premium products.”

The dynamics of beer sales in restaurants and bars are evolving rapidly, and craft beer is a critical factor in driving the trends. More than half of consumers (56%) agree that it is important for a restaurant or bar to offer a wide variety of craft beers, and half (49%) say they will go to a particular establishment because of its craft beer selection, according to another recent Technomic survey.

“We project craft beer in on-premise settings will continue posting double-digit gains,” says Schmidt, “But, the rate of product proliferation, advent of myriad styles and fuzzy definition of ‘craft’ presents challenges to both consumers and operators.”

Hard cider is another fast-growing category. “Cider’s growth is tremendous: Volume at retail and in restaurants rose 78% overall in 2012 and continues to grow in 2013,” Schmidt adds. To quantify and clarify the craft beer and cider opportunity in restaurants and bars, Technomic says it is planning a major research program entitled, “On-Premise Craft Beer & Cider: Opportunities, Challenges and Innovations.” Primary research will involve market analysis to identify leading brands and develop growth projections, as well as an extensive consumer survey to reveal craft beer and cider purchasing behaviors, influencers and preferences.

2017 Beverage Trends: Glass is Half Full