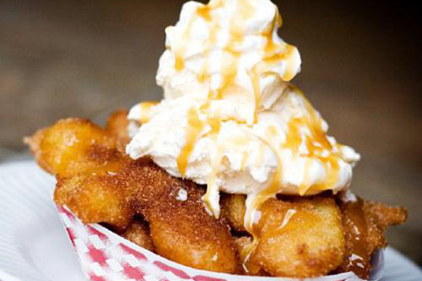 It all started with an addictive twist on an America classic that became a local sensation. Nine years later, Niki Durig of Portland, Ore., has her eyes on creating a national franchise that would share her dessert and opportunity with the country. The product is called Sweet Apple Pie Fries!™

"We take Granny Smith apples, cut them into thin slices, hand batter them, fry them, dust them in cinnamon and sugar, then serve them with whipped cream and caramel," explains Durig. "People love them. We've sold them at fairs, festivals, carnivals and other events in the Northwest . . . We recently finished filming with the Food Network Channel and have received many invitations to big shows."

Durig got the idea for Sweet Apple Pie Fries!  when she was seven months pregnant, in a bad relationship and looking for a way to take care of herself and two young children as a single mother. The recipe, she said, "Came to her in a dream after asking God to show her a way to provide for herself and her little ones.”

"I never thought it would become this popular," she said, "but we have so many fans in the Northwest, and calls pouring in from all over the country asking if we can do this in their area after seeing our treats on Facebook.”

That is going to take time, effort and – most of all – money. Durig has done the research and in order to create a successful national franchise, she needs funding for uniformed branding, operation manuals, market research, materials, legal filings, a prototype vending unit, franchise documents and sales training. The total comes to about $250,000.

She has decided to maintain control of the operation and fund the franchise through a Kickstarter campaign. The Kickstarter page, which includes a video that shows how Sweet Apple Pie Fries!™ are made from scratch, can be viewed at www.kickstarter.com/projects/333432652/sweet-apple-pie-fries.