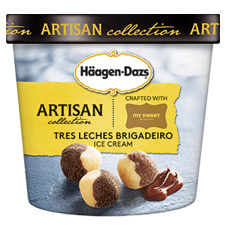 "To develop the Artisan Collection, we evaluated more than a hundred high-quality, culinary products," shared Kerry Hopkins, Häagen-Dazs Brand Manager. "After months of vetting, we identified and worked hand-in-hand with six artisans to co-create our new flavors that infuse the taste of the artisans' original creations with the rich, premium ingredients of Häagen-Dazs ice cream," says Hopkins. "Being a brand that was founded in 1960 by Reuben Mattus—by some considered the original ice cream artisan—it was imperative that we team up with artisans who embody the Häagen-Dazs brand philosophy of craftsmanship and using the finest ingredients."