Texture is one of the most important aspects of how consumers judge a food’s “taste.” Various challenges arise when food formulators attempt to replicate texture or mouthfeel using different ingredients. Read on to see how Prepared Foods’ R&D Seminar presenters covered all things textural.

Batter coatings can improve appearance and color, modify texture, retain moisture and flavor, add value, reduce fat absorption, and extend shelf life of fried foods. Texture is one of the most important characteristics of coated fried foods and, in general, can be described as crunchiness or crispiness. Crunchiness is due to a coating with dense layers of molecules to give good firmness. Crispiness is given by molecules made into a light, composite layer. Proper ingredient selection for coatings helps to achieve the desired texture in the fried product.

Coatings typically contain starch components as a major ingredient. Starches are made up of amylose and amylopectin, and their amounts vary depending on the botanical origin of the starch. 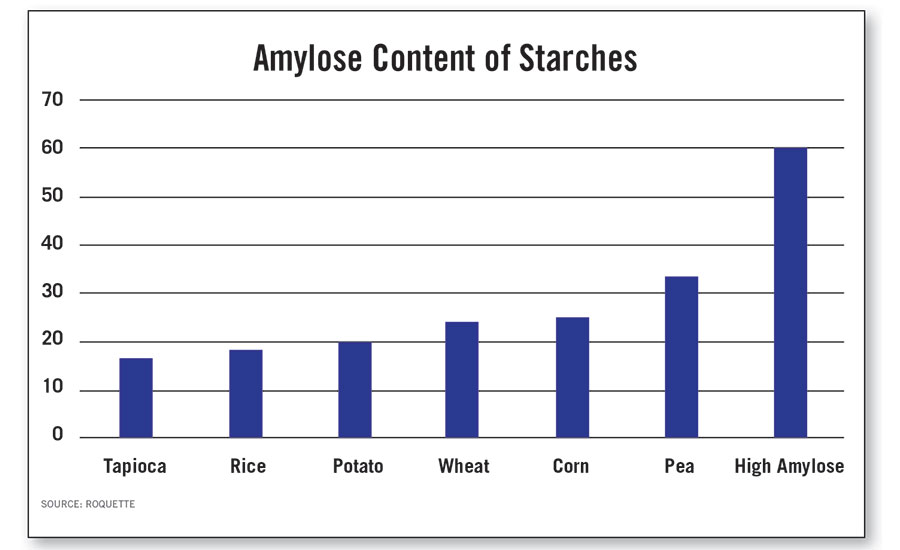 Amylose content of starches varies, depending on the botanical source. Starch properties vary depending on the amounts of amylose and amylopectin. Pea starch contains a relatively high amount of amylose, contributing to improved crispiness in coatings.

“Starch properties vary depending on the amounts of amylose and amylopectin,” explained Chandani Perera, principal scientist for Roquette, in her presentation titled “Novel Ingredients for Crispier Batter Coatings.” Pea starch is a novel starch with relatively high amylose, at 34%. It is also gluten-free, not a major allergen and non-GMO. Pea starch has good film-forming properties and forms strong gels.

Dextrins are also commonly used in batter coatings. Dextrins are made by modification of dry starch by action of heat and acid. The reaction is dependent upon temperature, time and acid content. Dextrins promote low viscosity at high concentration, adhesiveness, gel- and film-forming, improved solubility in water and resistance to starch retrogradation. Applications for dextrins include not only batter coatings, but also processed meats for their adhesion and moisture-binding properties; use as flavor carriers; for glazing baked goods; as a thickener in confectionery; and an easily digested carbohydrate. Dextrins are available in a variety of colors—from white to tan to yellow; or light to dark—depending of the level of conversion.

“A trial was conducted, in order to look at the characteristics of two types of pea dextrins in batter coatings for chicken nuggets at varying levels,” Chandani described. The trial consisted of a lower conversion white dextrin, white powder, with bland flavor; and a higher conversion yellow dextrin, tan powder, also with bland flavor. The batters were prepared with pea dextrins at 10, 15, 20, 25 and 30%, respectively. Batter viscosity was measured by Brookfield viscometer in centipoise at 10rpm. The chicken nuggets were dusted with corn starch then battered. Batter pick-up ratio was measured, and they were fried at 375°F for three minutes.

The results showed that the batter viscosity decreased with increasing dextrin content. This was consistent with batter pick-up being lower with lower viscosity and higher dextrin content, especially with the high-conversion dextrin. This was because of the dilution effect due to replacement of wheat flour with dextrins.

While both dextrins showed improved crispiness with increasing dextrin content, the higher conversion pea dextrin gave a lighter texture and more crispiness. Color increased with increasing dextrin levels for both the low- and high-conversion dextrins. Neither had sticking pieces (marriages), nor blow-off on surface, and both showed suitable adhesion to meat surface and consistent appearance.

Improving the Taste, Texture and Nutritional Profile of Dairy Alternatives

The report titled “Mintel Global Food and Drink Trends 2017” shows vegan and vegetarian claims are on the rise. According to Innova Market Insights, during the past five years, global launches of dairy alternatives outpaced dairy launches. Manufacturers of dairy alternative products face a host of challenges in limiting added sugar, while maintaining a competitive mineral profile that has no effect on taste or texture.

Cow’s milk contains 25% of the recommended daily value for calcium vs. soy milk, which naturally contains only 4%.

“Mineral fortification in dairy alternatives is commonly done to achieve a competitive mineral profile in comparison to cow’s milk,” explained Danielle Wedral Licata, market development manager, Health & Nutrition at Jungbunzlauer. Developers need a product that tastes good, so improvements in mouthfeel and texture often are needed, all while maintaining a stable emulsion to prevent sedimentation.

Various calcium sources are used to fortify food. Calcium levels vary, as do solubility and taste. “Organic mineral salts can be a valuable source for calcium and beyond. They allow for a pure, clean taste and provide highly bioavailable nutritional content that can match the calcium value of milk,” she noted.

Wedral Licata added, “Sugar reduction now is often a part of dairy-alternative product development, as sweetened dairy alternatives currently may have up to 16g of added sugars and 30-60 additional calories per serving.”

Consumers want to reduce sugar and avoid both added sugar and artificial sweeteners. However, purchasing behavior indicates that taste is still very important.

When sugar is reduced in a product, there also is a reduction in flavor, sweetness intensity, mouthfeel and body, and in gelling and suspension. As sugar is reduced, bitter or metallic off-tastes and harsh notes from acids, vitamins and minerals may become more apparent. Sugars are typically replaced by more than one ingredient, rather than a sweetener system.

“Each ingredient has benefits and limitations, and it is important to look at the whole picture,” Wedral Licata stated. Some ingredients can have multiple functions, such as a sweetener and a flavor modifier. When used in combination, minor changes can be used synergistically to obtain an optimized product with substantial sugar reduction.

Plant materials often provide phytochemicals that are related to off-tastes like bitterness or astringency. And, suspended particles can contribute to a sandy mouthfeel. A sensory evaluation of various plant-based drinks showed that addition of mineral salts significantly reduced off-tastes.

Next-generation dairy alternatives may be sourced from a variety of ingredients, such as rice, barley, oats, pistachios, chia and hemp. These plant-based beverages often cross over multiple categories. For example, would a coffee beverage with almond milk be considered a dairy alternative or a coffee, or both?

Leanne Levy, senior manager-Americas Marketing, at CP Kelco, presented a Prepared Foods’ R&D Seminar on “Achieving Textural Satisfaction” and discussed how texture is just as important as flavor in influencing the eating experience. Texture can do everything from impacting a food’s flavor to changing the sense of satiety or fullness of the consumer, and much more.

Levy began by discussing the important role of hydrocolloids, which are polymers that thicken, gel and suspend water. CP Kelco manufactures hydrocolloids that provide unique textures to products, ranging from dairy desserts to alcoholic beverages.

Hydrocolloids fall under two distinct categories—those that are fermentation-based and those from plant sources.

Different hydrocolloids provide different types of mouthfeel and viscosity. Texture will improve the way the product feels to the touch, i.e., thick, thin, slippery, creamy, smooth, gelled vs. liquid, etc. Viscosity will change the resistance to flow in materials with fluid properties. This can be useful for a few reasons.

First, hydrocolloids can bring back mouthfeel in a reduced-sugar beverage; mimic the decadence of fat in reduced-fat dairy beverages; and create the right viscosity in nutritional beverages. In addition, hydrocolloids can reduce perceived grittiness in powdered beverages and provide long-lasting suspension for insoluble nutrients. Lastly, hydrocolloids can prevent creaming in protein beverages and also protect proteins from aggregating. Some examples of hydrocolloid ingredients include gellan gum, xanthan gum, pectin, carrageenan and cellulose gum.

Levy conducted demonstrations to show attendees the textural differences using different hydrocolloids in emulsions and suspensions, which is a mixture of small particles that are dispersed throughout the liquid or gas phase. Suspension can be particularly important in a beverage system. Suspending insoluble particles homogenously will support nutrition claims and enhance visual appeal and functionality.

Some examples of suspended ingredients include tricalcium phosphate, colors, fruit particulates, insoluble fiber, cocoa, protein and spices. During the demonstration, participants made their own salad dressings, using different hydrocolloids in creating stable emulsions.

The presentation also covered a fluid gel system, which essentially acts like a gel at rest, but becomes very pourable with interaction. When a solution is at rest, the fluid gel has a seemingly high viscosity, resulting in first-rate suspension of insoluble ingredients. However, because of the weak molecular associations, the network is easily disrupted, creating a viscosity that allows for a smooth pour and a light, refreshing mouthfeel.

A demonstration followed in which audience members created gel beads that would sink to the bottom of their beverages and then suspend, to create a fluid gel, once calcium chloride was added to the solution.

The presentation provided a good starting point for businesses interested in experimenting with emulsions and different textures in their products. CP Kelco offers a broad portfolio of solutions and ingredients that can help improve texture and mouthfeel, and the company’s technical and applications experts can help problem-solve for products that are in need of viscosity-level tweaking, or for new or innovative formulations which must address specific challenges, such as sugar reduction, protein stabilization and/or clean label requirements.

Originally appeared in the April, 2018 issue of Prepared Foods as Textbook Texture.