There's Nothing Fishy About the Boom in Plant-Based Seafood

New Way to "Sea" Food: With nearly all waterways overfished, seafood alternatives are riding a wave of popularity

Consumer interest in plant-based eating continues to drive product innovation. A new generation of plant-based meat alternatives that promote having the taste, texture, and appearance as close to the animal-derived version as possible have burst onto the scene. Meat, poultry, and seafood analogs transcended their debut in restaurants and are now available in supermarkets everywhere, positioned next to packages of the real thing.

The plant-based seafood category shows potential for continued accelerated growth. Launches of plant-based seafood alternatives had a compound annual growth rate (CAGR) of 44% in North America and 15% globally over the 2016-2020 period, according to data from Innova Market Insights. Then, the category experienced a big 27% jump in 2020, to $7B annually, according to a study by the Good Food Institute and Plant-Based Foods Assn.

“We’re seeing more and more big-box retailers adding plant-based options to their offerings, making it so consumers are getting more exposure to plant-based products, and overall normalizing the segment,” says Tal Golan, Business Development Specialist of Sophie’s Kitchen, which offers vegan versions of smoked salmon, tuna, shrimp, and crab cakes. This exposure in large retailers, along with the growing awareness of vegetarianism/ veganism and improvements to ingredients used in plant-based products, can help the popularity of plant-based seafood to continue to expand in the future.

Plant-based seafood offers a dietary choice to those who follow vegetarian and vegan diets, are allergic to fish or shellfish, or want to reduce their consumption of animal products. Consumers, especially younger ones, are more open to trying novel products, and plant-based seafood products offer the variety they seek. The products also appeal to consumers concerned about environmental and sustainability issues around overfishing and ocean pollution.

“Each marine animal duplicated in a plant-based version has its own unique qualities that must be mastered individually—and successfully—if consumers are going to make the switch,” says Monica Talbert, Co-founder and CEO of The Plant Based Seafood Co., makers of Mind Blown plant-based shrimp, lobster crab cakes, and scallops.

There’s a range of legumes, seaweed, flavors, starches, and gums that produce the textures, flavors, and appearances of the distinct seafood species in plant-based formats. For example, pea protein and wheat protein are the main components in plant-based tuna from Nestlé Food Co.’s Sensational Vuna alt-tuna product, while seaweed-derived ingredients give flavor and improve the texture in vegan caviar from IKEA.

Flavors give products characteristic seafood tastes and mask off flavors from other ingredients, and include yeast extracts and savory flavors to boost umami taste and richness. Seaweed helps create seafood flavors formulated to give the distinct tastes of different types of fish and shellfish species, while vegan flavors derived from algal oil that give the tastes of oily dark fish and fleshy white fish.

A proprietary blend that includes mung bean protein and seaweed-derived ingredients gives the characteristic snap and texture to plant-based shrimp from New Wave Foods. “Just as flavor is extremely important, the texture and appearance of the plant-based shrimp is critical, so we focused heavily on creating a product that will deliver across all aspects,” says Michelle Wolf, Co-founder and CTO of New Wave Foods. “We worked with a range of experts to ensure we are producing a plant-based option that is virtually indistinguishable from ocean shrimp. Our proprietary product came to life through a close collaboration between top-tier chefs and renowned R&D experts.” 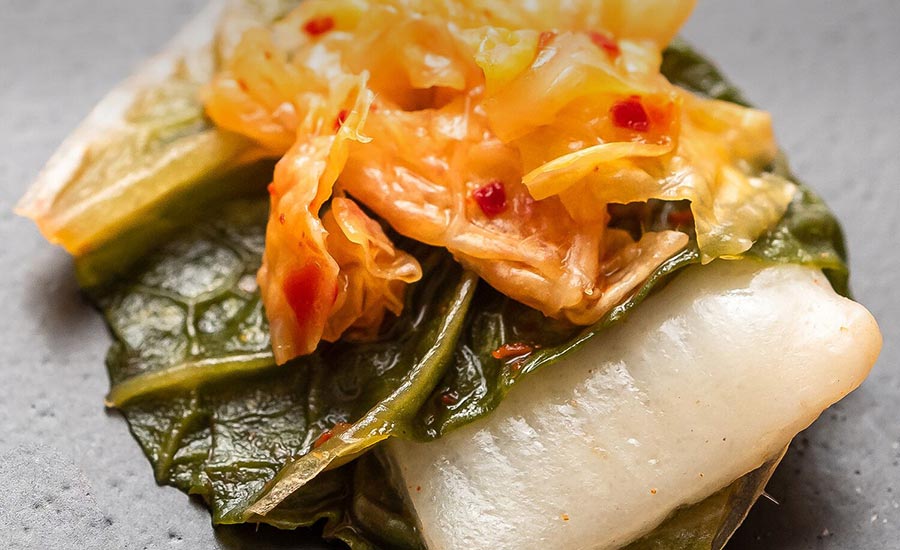 Sometimes, the best alternative to real seafood is…real seafood. While still in its birth, the cell-based seafood industry is growing with astonishing speed. Earlier this year, BlueNalu, Inc., the current frontrunner producing seafood directly from fish cells, received another $60M in investment, allowing it to open a 40,000 square foot pilot plant and seek FDA approval for its first products. According to company president and CEO Lou Cooperhouse, the XPRIZE finalist company should begin initial product to production by the end of next year. He also has noted how price parity is more readily in reach as many of the costs (as well as risks and food safety issues) associated with mainstream seafood production are drastically reduced and even eliminated when it I produced in a clean facility, without harm or contaminants. Technology is about to keep the promise of guilt-free, real seafood becoming a ready choice for consumers.

“Consumers are more conscious than ever about ingredients and the source of those ingredients,” says Mei. “We’ve seen that flexitarian consumers are seeking plant-based products that offer a similar nutritional benefit to the animal-based counterpart, so the protein content is really important.” The company recently debuted plant-based breaded fish sticks, fish fillets, and crab cakes through the Good Catch brand.

Soy protein is widely used in plant-based meat products, and is also a popular choice for plant-based seafood. There’s a ready supply of soy available, making it cost-effective, and the different formats (textured varieties, isolates, concentrates) provide important texturizing functions and can simulate the natural structure of seafood.

Other legumes, grains, and pulses are increasingly used in plant-based seafood, especially in products making soy-free, certain allergen-free, and gluten-free claims. Textured pea protein and fava bean protein ingredients are crafted into various shapes to allow product developers to target specific attributes such as cohesiveness, juiciness, or firmness, and create fibrous textures and bites in plant-based fish products such as fish sticks.

Combining chickpea flour with yellow pea protein produces a textured protein ingredient with a higher water holding capacity than textured yellow pea protein on its own. It also helps to produce textures that are firm and elastic, which work well in plant-based crab cakes, fish sticks and nuggets, and shellfish applications.

Emerging innovations in protein ingredients continue to be made, with mycoprotein and microalgae protein showing promise in plant-based seafood. Mycoprotein is a complete protein produced from fungi through a fermentation process. The ingredient’s fibrous texture gives it potential to mimic the texture of fish. It was first used as a meat substitute by Marlow Foods, Ltd.’s Quorn Foods, USA, which uses it in fish-free products.

Mycoprotein can be produced through zero-waste fermentation, which has generated renewed interest by start-ups seeking to boost their sustainability efforts. Microalgae are also rich in protein (some species have protein contents of up to 70%) and are produced for commercial use via fermentation processes. Different types of microalgae protein ingredients are in development, including one developed to exhibit natural amounts of heme, giving it a red hue suited for use in plant-based seafood products such as tuna where the color would enhance the overall appearance.

The investments and energies being invested in fish and seafood analogs will prove successful in the coming years even as the increasing threats to our waterways become more pronounced. Seafood alternatives have rapidly closed in on the ability to mimic flavors and textures of their swimming counterparts and, joining other alternatives such as tank-raised seafood, cell-based fish, 3-D printed vegan seafood, and farmed seafood (which has improved markedly in sustainability and safety) to give our waterways a much-needed rest.

Comparing the ingredient statements for some plant-based seafood products shows the range of non-protein ingredients used for their texturizing and other functional properties, including various starches, flours, and gums. Pea starch, konjac powder, and several hydrocolloids are a few ingredients that influence the final structure of the products.

With one of the highest proportions of amylose (long, unbranched polysaccharide chains) to amylopectin (long, branched polysaccharide chains), native pea starch helps form a very firm gel system that can be used to mimic the strength of whole muscle shrimp and squid. In addition, its low water holding capacity produces firm and snappy products, rather than soggy or moist.

Hydrocolloids have powerful thickening and gelling properties and are key ingredients that can help create desired textures in plant-based seafood products. Seaweed-derived ingredients include carrageenan and alginate. While each has specific gelling properties that are affected by the presence of other components such as proteins and calcium ions, in general, they serve as gelling and thickening agents that can improve mouthfeel and texture.

Gellan gum, a polysaccharide produced through a fermentation process, provides gelation and stabilization, and it functions as a thickening agent. Konjac powder (flour), which is derived from the starchy root of the konjac plant, is a gelling agent that binds water in seafood analogs.

Konjac also interacts synergistically with some of the other hydrocolloids, including seaweed-derived carrageenan. The synergistic effect of a konjac/carrageenan system gives shrimp- and calamari-like firmness, elasticity, and chewiness to the plant-based counterparts.

Karen Nachay, MS, is a writer and researcher who covers food ingredients, food and beverage trends, cutting-edge science, and culinary developments. She has worked as a writer and editor for a food science magazine. Prior to that she worked in the laboratories at two ingredient manufacturers. Contact her at karen.nachay@gmail.com.