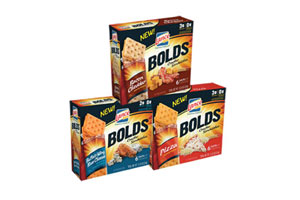 Snacks manufacturer Snyder’s-Lance Inc., Charlotte, N.C., marked the first anniversary of its research and development center. Located near one of the company’s largest bakeries in Hanover, Pa., the new site already has fueled several new product introductions that are both innovative and in line with consumer trends, officials say.

Snyder’s-Lance says new product-driven revenue in 2014 has been double that of new products in 2013 (a new record for the company). They say it demonstrates the critical importance of research and development and an innovation pipeline. Meanwhile, the company’s new product efforts have spanned its entire core brand portfolio including Snyder’s of Hanover, Lance, Cape Cod and Snack Factory.

“The opening of the research and development Center last summer was part of our company’s transformation, and now our effort is proving itself in the market,” said Rod Troni, chief marketing officer for Snyder’s-Lance. “Snyder’s-Lance is focused on aggressively creating innovative and better-for-you snacking options for our customers, executing new product launches that surprise them, and being nimble enough to remain at the center of trends that evolve with their eating habits.”

By using detailed product and quality comparisons, sensory evaluation and lab tests at the Research and Development Center, Snyder’s-Lance employs a consumer-centric approach to develop products that are in sync with consumer trends. The top new items for Snyder’s-Lance this year come from each of the company’s core product lines, including:

“The first year of using the research and development center paid dividends for Snyder’s-Lance and—after acquiring the capabilities of Baptista’s Bakery—the company has even more tools in its arsenal to innovate,” says Troni. “Expect big announcements and new products in the coming year that will drive future growth for our company.”

Snyder's-Lance Creates "Better For You" Division