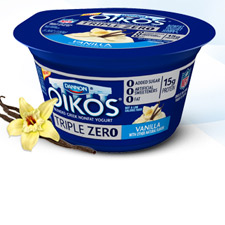 To answer many consumers’ desire for a protein snack with a stronger nutritional profile, Dannon has created a yogurt – new Oikos Triple Zero. Unlike some other protein snacks, Oikos Triple Zero packs in 15 grams of protein with zero added sugar, zero artificial sweeteners and zero fat. Dannon is teaming-up with Carolina Panthers quarterback, Cam Newton, to bring consumers a new protein snack in an unexpected location – the yogurt aisle.

“As America’s largest yogurt maker, we have a commitment and an opportunity to help Americans live healthier lives through the food choices they make. Oikos Triple Zero does exactly that.” In an effort to engage with a wider audience, the brand became the Official Yogurt of the NFL and introduced a product that appeals equally to both men and women – Oikos Triple Zero. Through these efforts, Dannon is changing the current market where yogurt is disproportionately consumed by women as compared to men.

In a new advertising campaign being unveiled on January 12, Dannon and Newton encourage consumers to look beyond traditional staples for protein. Recruiting shoppers from the protein snack aisle into the yogurt aisle, the Panthers star puts his own personal flair in helping to change people’s snacking habits.

“As an athlete, I pay close attention to what I eat – whether it’s between meals or after working out,” said two-time NFL Pro Bowler Newton. “It’s funny because I really do find myself searching the grocery store for new protein snack options. Oikos Triple Zero was quite honestly right up my alley – not only because of its nutritional benefits, but because it tastes good too.”

“There aren’t many great choices for protein snacks that also have other important nutrients,” said Art D’Elia, Vice President of Marketing for Dannon. “As America’s largest yogurt maker, we have a commitment and an opportunity to help Americans live healthier lives through the food choices they make. Oikos Triple Zero does exactly that.”

Dannon will be supporting the launch of the product with a multi-million dollar media investment. With the goal of expanding its once predominantly female consumer, the brand will be exploring integrated partnerships with television networks with a high male viewership. The brand will also be a presenting sponsor of various NFL Network shows and plans to activate full NFL.com takeovers. Available in six protein-packed flavors – Vanilla, Coconut Crème, Strawberry, Banana Crème, Mixed Berry and Peach – the new yogurt began to hit shelves December 20 and continues to roll-out nationwide.