The iced tea line will be available in three varieties: lemonade, raspberry and peach 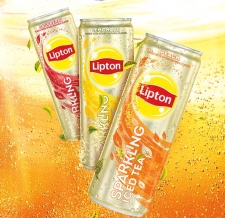 Lipton® Iced Tea introduced a line of lightly carbonated iced teas. In celebration of the launch, actress Brittany Snow and Brooklyn, N.Y.-based alternative rock band American Authors are hosting a concert in Park City, Utah, during the opening weekend of one of the nation’s premier film festivals.

“I’m beyond excited to kick-off a few surprises with Lipton this year starting with an amazing launch party featuring American Authors,” Snow said. “I’m all about embracing the feel-good, unexpected moments in life and I’m honored I get to be a part of something that represents that same sentiment.”

Lipton Sparkling Iced Tea is the latest innovation that highlights the essence of Lipton’s ‘Be More Tea’ brand philosophy, which encourages people to refresh their daily routines to be more uplifting. The Lipton Sparkling Iced Tea campaign will debut a TV spot in March featuring a refreshing take on a classic with the remake of the 1966 hit song, “Tiny Bubbles,” performed by American Authors. The ad will take viewers through a series of everyday scenarios that show how blending the worlds of tea and tiny bubbles can provide a refreshingly uplifting experience. Snow and American Authors will also appear in a series of digital shorts premiering in February.

“One of the best things about being in a band is that we have the chance to lift people up through our music, and we like to stand behind other efforts that embody that same spirit,” said Zac Barnett lead singer for American Authors.

The iced tea line will be available in three varieties: lemonade, raspberry and peach.

“We’re excited to launch our newest innovation and add a spark to everyday routines with the combination of iced tea and light, crisp tiny bubbles,” said Linda Bethea, senior director of marketing at Pepsi Lipton Partnership. “We’re thrilled to be joined by Brittany Snow and American Authors for the kick-off. Their fun, uplifting personalities will help us deliver our ‘Be More Tea’ message to Lipton fans everywhere.”