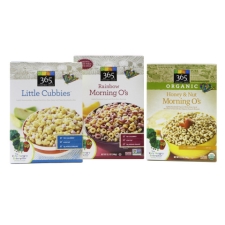 Whole Foods Market and The World of Eric Carle, the award-winning brand based on works by the acclaimed children’s author and illustrator, have teamed up to create a series of 365 Everyday Value® cereal boxes featuring games for children and Carle’s signature artwork, including the beloved “The Very Hungry Caterpillar.”

“Eric Carle’s work inspires intellectual and creative growth for children,” said Brianna Blanton, brand manager for Whole Foods Market’s private label brands. “We hope our shoppers enjoy seeing his artwork on our shelves as much as their little ones do.”

Carle is known for his beautifully illustrated, best-selling picture books. Carle’s “The Very Hungry Caterpillar” has been translated into 60 languages and has sold over 38 million copies since its publication in 1969. In his lifetime, Carle has written and illustrated more than 70 picture books, which have sold over 125 million copies.

“We are proud to partner with Whole Foods Market, a company that shares The World of Eric Carle’s commitment to the highest quality standards,” said Debra Joester, president of The Joester Loria Group. “We are particularly delighted that millions of families will have the opportunity to engage with wonderful games, art and content featuring Eric Carle’s work, at their breakfast table every morning.”

Family First: How to Formulate With Probiotics for Whole-Body, Whole Family Benefits