The movement toward vegetables isn’t rooted in a desire to avoid meat; it’s rooted in a growing demand for nutritious, plant-based food

This movement toward vegetables isn’t rooted in a desire to avoid meat; it’s rooted in a growing demand for nutritious, plant-based food. In fact, the report shows consumers are more likely to order items described as plant-based as those described as meatless or meat-free. Expect vegetables to increasingly play a starring role on restaurant menus for this reason. (For a closer look at this shift, see chart “Dishing out the Veggies.”)

Dishing out the Veggies

How likely or unlikely would you be to order a dish described with the following terms, at least occasionally (once every 90 days)?

Vegetables like mushrooms and corn now are replacing commercially produced soy proteins as meat alternatives on the menu. Veggies are the leading protein substitute of choice among consumers, with over three-fourths of diners (77%) stating they would consider ordering vegetables instead of meat in a restaurant dish. Moreover, consumer interest in soy as a protein substitute has decreased from two years ago. Less than two-fifths of consumers (39%) say they would order soy as a meat replacement today, compared to 45% of diners in 2014. (See chart “Alternative Universe.”)

Which protein substitutes/meat alternatives would you consider ordering as an ingredient in a dish at a restaurant or other foodservice location? (Select all that apply.) 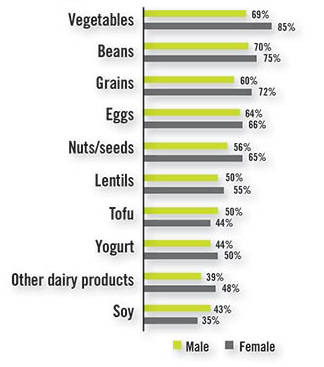 Some of the ways we’re seeing this trend play out on the menu include a focus on root-to-stem vegetables and meat-like produce preparations, such as charring and smoking. In March, organic burger chain Bareburger began selling Impossible Foods’ plant-based “bleeding” burger at one location in New York City. Impossible Foods has raised more than $180 million from investors to date, including Google Ventures, UBS and Bill Gates.

Restaurants should no longer think of vegetarian entrees as a way to reduce the veto vote, but instead, as a way to boost profits.

Originally appeared in the May, 2017 issue of Prepared Foods as Veggie-minded Consumers Influence the Menu.

How to Appeal to College-aged Consumers

Meat Consumption Will Grow Beyond Dinner

Darren Tristano is chief insights officer at Technomic’s parent company, Winsight. Since 1993, he has led the development of Technomic’s Information Services division and directed multiple aspects of the firm’s operations.

Influence of Gen Z on Foodservice

Consumer Influence on the Menu