So-called “ancient grains” have become featured ingredients in more new products during the past few years.

Exactly what are ancient grains? Exact definitions vary but it is generally agreed that these grains once were popular, basic food cereals before they faded away with the rise of modern cereal crops, such as wheat and corn. Ancient grains’ resurgence reflects rising levels of interest in alternative ingredients now positioned as traditional, natural and nutritious. Moreover, some of these older grains are ideal for on-trend gluten-free formulations.

Ten years ago, in 2007, Innova Market Insights found ancient grains featured in just 0.5% of global food and drink new product launches. That number doubled to more than 1% five years ago, in 2012. More recently, ancient grains featured in 2.5% of new product launches during the 12 months to the end of June 2017. Interestingly, the US market led the rediscovery and mainstream shift. Here, penetration was slightly higher 10 years ago, but still less than 1%, rising strongly to more than 3% of all new US foods and drinks during the most recent 12-month period.

Many products feature various ancient grains, although quinoa often is considered as the most popular in the mainstream shift. It leads in terms of new product activity and has been featured in more than 40% of US launches that feature ancient grains. Looking at the broader list, quinoa now is just ahead of chia, which appeared in 38% of formulations with ancient grains. The next most popular grains are millet, ranked third in 22.5% of launches; buckwheat, fourth with 15.6% of new launches; and sorghum, which ranks fifth and appeared in just under 14% of launches.

Coming up behind are grain ingredients such as spelt, triticale, amaranth, kamut/khorasan, einkorn, emmer and freekeh. All these grains appear in single-digit figures in new product launches. Most often, they are used in combination with one or more other ancient grains, as well as other standard ingredients.

Looking at the broader list, quinoa now is just ahead of chia, which appeared in 38% of formulations with ancient grains.

Although ancient grains have featured in most food and drinks categories to some extent in recent years, launch numbers in the US have been highest in cereals, bakery, ready meals and snacks. These four categories accounted for just under two-thirds of launches using ancient grains as ingredients. Some individual sub-categories saw particularly high penetration levels, led by other meal components (largely made up of grain products) in ready meals on 43%; cereal & energy bars in cereals, on just under 24%; and savory biscuits and bread/bread products in bakery on just under 16% and just over 13%, respectively.

Perhaps not surprisingly, cereals have seen the highest levels of formulation interest, with ancient grains featured in nearly one-fifth of US launches recorded by Innova Market Insights during the 12 months to the end of June 2017. Cereal bars have seen particularly high levels of activity, with 23.6% of launches featuring ancient grains, while breakfast cereals have seen a lower but still significant level of just under 16%.

The mainstream US breakfast cereals shift accelerated in 2013 when Kellogg’s launched Special K Nourish multigrain cereals and cereal bars. These are made with quinoa in combination with oats, barley and wheat. Kellogg’s came back in 2015 with an “Origins” line that featured an Ancient Grains Blend (cereal) and two Ancient Grains granolas. It was not smooth sailing, however. While Nourish remains on the market and still contains quinoa—that fact is not emphasized. Meanwhile, the Origins line and items were actually withdrawn in 2016. For the record, similar products remain in many European markets, including the UK, under the Kellogg’s Ancient Legends name.

Ancient grains continue to feature in breakfast cereals. However, it seems marketers’ focus has shifted more to a range of benefits—including ancient grains. Quaker’s Overnight Oats chilled oat cereal contains quinoa and flaxseed, for example, but really carries a convenience positioning. Consumers simply add milk at night and the cereal is ready to consume cold—straight from the refrigerator—the next morning. 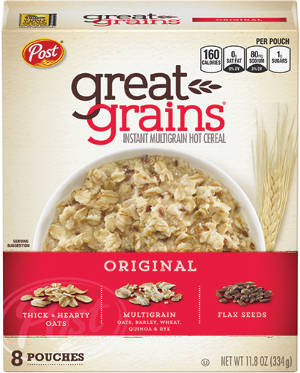 Even private labels are getting in on the act, with retailer Stop & Shop (owned by Ahold of the Netherlands) extending its granola bar range with Ancient Grain & Chia and Oat & Quinoa varieties.

Ancient grains also play important roles in snacks. Activity levels have been particularly high in salty snacks, where ancient grains featured in 9.4% of launches recorded during the 12 months to the end of June 2017. This reflects the trend toward a growing range of ingredients and flavors being used in new products, offering alternatives to the more traditional potatoes, corn, wheat and soy. Alternative ingredients such as ancient grains add variety in terms of flavor and texture; and lend a healthier, more nutritious image.

One market driver has been Inventure Foods, Phoenix, and its Boulder Canyon brand. Starting in 2014, the company introduced an Ancient Grains Crisps snack with quinoa, millet, sorghum, brown rice, brown teff and amaranth. By the end of 2016, Boulder Canyon had added two new flavors: Roasted Red Salsa and Pink Himalayan Salt & Cracked Pepper. Meanwhile, it extended its range with a number of new-style snack crisps made with a wholesome ingredients, including ancient grains. These have included Lentil Carrot Quinoa Crisps in two varieties: Sea Salt & Cracked Pepper and Balsamic Herb. All Boulder Canyon products are baked not fried, gluten-free, trans-fat-free, non-GMO and with zero cholesterol and 130 calories or less per serving.

Activity levels have been particularly high in salty snacks, where ancient grains featured in 9.4% of launches recorded during the 12 months to the end of June 2017.

There also plenty to talk about in the snack nuts and seeds sub-category—although new product introductions with ancient grains are only half those recorded for salty snacks. One active area involves packaged chia seeds. These items usually emphasize omega-3 fatty acids and fiber content, vitamins and minerals, gluten-free and vegan properties, and also organic and non-GMO certifications. They and other ancient grains also feature in a range of products, usually in blends with other ingredients and often come packaged in resealable pouches to promote sharing.

Within the bakery category, bread has seen the most activity with launches featuring ancient grains. These ingredients were used in more than 13% of introductions in the sub-category during the 12 months to the end of June 2017. Rising levels of interest in artisan-style breads have linked in well with this trend, with ancient grains offer a traditional image, as well as whole grains, nutrition, and different tastes and textures.

Within the bakery category, bread has seen the most activity with launches featuring ancient grains. These ingredients were used in more than 13% of introductions in the sub-category during the 12 months to the end of June 2017.

Gluten-free bakery specialists also have made the most of this trend, with companies such as Canyon Bakehouse LLC, Loveland, Colo., launching a Whole Grain option in its Heritage-Style line. It includes buckwheat, sorghum, teff, quinoa, millet and amaranth. Bfree Foods, Dublin, Ireland, showcases ancient grains in a number of its US gluten-free offerings, including buckwheat, quinoa and millet in its Seeded Brown sliced loaf; and quinoa and buckwheat in its Multiseed Bagels. It also introduced gluten-free and wheat-free Quinoa and Chia Wraps.

Some of the leading branded bread players have been active in breads with ancient grains—although with varying degrees of success. Last year saw Pepperidge Farm introduce a Harvest Blends line with three varieties: Ancient Grains, Seeded Grains and Sprouted Grains. Even so, the line may since have been discontinued. On the other hand, Bimbo Bakeries USA has extended its Oroweat wholegrain breads line with an Organic 22 Grains & Seeds Bread (including chia, kamut, khorasan, teff, millet, buckwheat, spelt, triticale, sorghum and quinoa) and Organic Quinoa and Wheat Bread. For their part, retailers also have been active with launches. New examples include Kroger’s Simple Truth Organic Sliced Quinoa & Multigrain Bread and Ancient Grains Multigrain Bread (featuring an ancient grains blend of flax, millet, spelt, khorasan, amaranth and quinoa).

Although ancient grains have the highest numbers in bread launches in the bakery category, savory biscuits actually have seen a higher penetration level in 2017, with 15.6% of the more modest total featuring ancient grains. 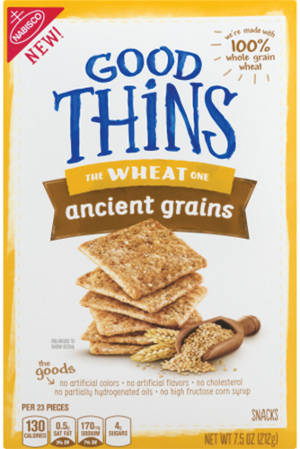 Savory biscuits have moved on from traditional status as an accompaniment—to a snack in their own right. They’re often promoted on a healthy, clean-label platform, with wholegrain claims particularly popular. This sets the scene for rising activity levels in grains and seeds, including ancient grains. Major brands active in recent months include Kellogg’s Special K Original Quinoa Crackers with Sea Salt; and Mondelez International, which introduced Good THiNS “The Wheat One” Ancient Grain crackers.  They feature buckwheat, millet, quinoa and amaranth.

Ancient grains seem set to continue their return to consumer diets. This reflects rising levels of awareness of their nutritional properties, as well as the unique flavors and textures that they impart to a wide range of food and drinks products. They also are compatible with other trends of the moment—such as increasing demand for clean label and free-from options, the rise in popularity of vegan-friendly products and interest in specialist diets such as paleo, raw and even low FODMAP.