The Push For Proteins Shows No Signs of Slowing

Of the three “macronutrients,” protein, lipids, and carbohydrates, protein ranks as foremost on the minds of consumers as they strive to eat more healthfully, age gracefully, and stay youthfully energetic. As 2019 opens its doors, the race to provide protein as both a nutritional enhancement and a primary formulation component will become more heated. Here’s what food and beverage makers can expect in the way of protein possibilities in the coming year.

Plant proteins are, without any doubt, going to continue to surge forward for a while to come. Last summer, Innova Market Insights reported that plant-based product claims increased by 62% globally from 2013 to 2017, noting that the primary drive was focused on plant-derived proteins. And according to the USDA, the meat substitutes market topped $4.6 billion this year and is expected to increase by at least another 50% in the next four years.

Alongside this worldwide effort to do the impossible and make plant-based meat substitutes that are beyond meat in flavor and texture is the search for novel sources. This has brought into play proteins from a diverse spectrum of roots and tubers; nuts; legumes (peas, chickpeas, and lentils) as well as seeds and grains, such as chia, quinoa, hemp, and even watermelon and pumpkin.

Of these, use of chia protein and hemp protein are on the rise, with hemp getting a big lift from the cannabis explosion. Pumpkin seed protein, too, is trending up fast. And while the last several years saw chickpea protein enter the market with a splash, 2018 saw an even larger leap in the use of chickpea protein.

Nutrition and protein bars often contain nuts as a whole-food source of natural plant proteins. However, getting even more protein into a single-serving bar is easier with a new protein source on the market, almond protein. A non-GMO protein, almond protein powder is 40-45% protein and thus nutrient dense while also acting as an excellent source of fiber. It also is high in minerals, especially the sports recovery minerals potassium and calcium, as well as magnesium, phosphorous, manganese and copper.

Pea protein also is enjoying a big bump that’s expected to continue. This is due to technological innovations that have nearly eliminated any off flavors and chalky textures. According to a recent report by Allied Market Research, the global pea protein market is expected to shoot up from $32 million in 2017 to more than $175 million by 2025. The report further noted that “in 2017, the pea protein isolate segment accounted for more than half the share of the global pea protein market in terms of value.”

Other advances have included greater variety of formats and textures, including texture integrity and control, and moisture retention, especially for using in meat analogs. This aspect also has benefitted protein from roots and tubers, especially potato protein. Potato protein is commonly non-GMO as well as hypoallergenic, making it an excellent turn-to ingredient for helping to solve flavor and textural challenges in so-called “plant meats.”

Dairy proteins are poised for a surge as well. While the flourishing vegan category might seem to put a dent into dairy, dairy proteins, especially whey, have long been preferred in the booming sports beverage market. Dairy proteins, too will display how they have benefited from leaps in technology. New dairy proteins have significantly expanded the applications they can conform to and are both stimulating and benefiting from the protein water tsunami.

There now are available clean-label, instant whey isolates that are clear in solution, with a more neutral pH to allow for a much wider range of applications. A good example are the numerous brands of protein-enhanced waters flooding the market.

Casein—especially micellar casein—is a more slowly digested protein. Non-GMO grass-fed fresh milk is cold-pressed to keep the proteins in micellar form, the original structure of the protein molecule. These are native, minimally processed, and instantized proteins. They also are heat-stable, with low-viscosity allowing for super solubility and clarity.

Look for the demand for protein to continue its growth and expansion across food and beverage offerings in the new year. And, while plant protein sources will carry the lion’s share of the growth, dairy and animal proteins will remain prominent, giving developers plenty of options to choose from as they strive to feed this important consumer need.

By Shelly McKee, PhD, director of technical services for the USA Poultry & Egg Export Council and consultant to the American Egg Board

Certain products, such as meat, poultry, and seafood analogs (i.e. surimi) rely on eggs to help create a stable, 3-D structure and homogeneous product appearance, texture and form. Specifically, high-gel egg white is a highly versatile and inexpensive form of functional protein. This functionality of egg whites is augmented by the fact that egg white is the dietary protein source with the highest bioavailability.

Other food manufacturers taking advantage of these benefits of high-gel egg whites include those processors who want to utilize smaller, yet valuable bits of protein that would otherwise go to waste and form them into value-added products with a palatable appearance.

A high-gel egg white is the spray-dried or powdered version of egg white, modified to obtain a pH near 8 or slightly higher. These products are all pasteurized for safety, and egg ingredients can be highly application specific. In all applications, the proteins in egg whites not only bind individual components for proper form, they impact the full complement of sensory characteristics (such as mouthfeel and bite) that help create a desirable end product. For more information, visit www.aeb.org/buyersguide.

Shelly McKee, PhD, is the director of technical services for the USA Poultry & Egg Export Council and a consultant to the American Egg Board. 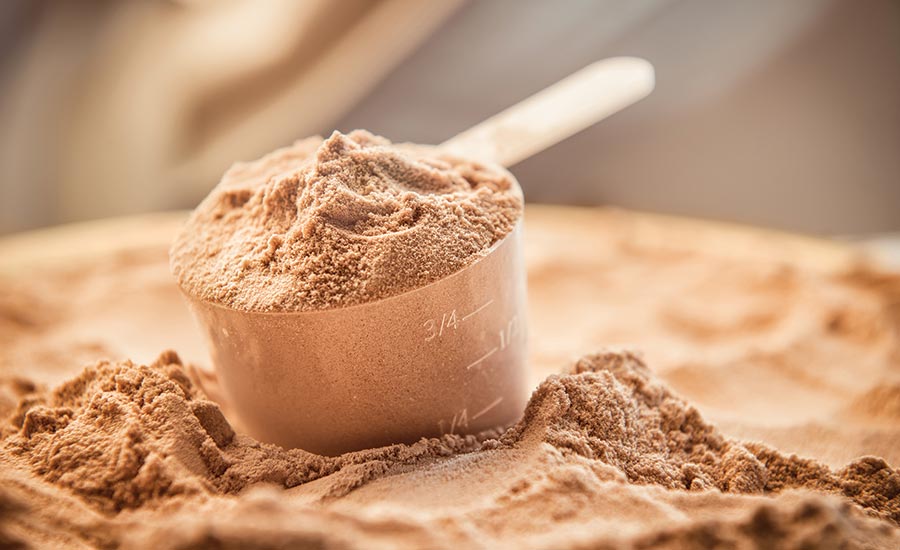 The Paleo craze might be plateauing, but it has brought counterbalance to the vegetarian/vegan trend in that animal proteins will likely continue to enjoy a parallel increase with plant proteins. The rapidly expanding sports product category has boosted its interest in hydrolyzed protein isolates, such as from chicken, and especially for older active consumers for whom protein deficit is a serious health issue. Animal protein isolates are easily digested and highly bioavailable. They deliver strong muscle-building capacity and have high levels of type II collagen for joint support. Moreover, the 2:1 potassium-to-sodium ratio in such isolates helps promote recovery and rehydration via a natural electrolyte balance.

Originally appeared in the December, 2018 issue of Prepared Foods as Protein Powers Up.

David Feder, RDN, has been a food, nutrition and health journalist for 26 years. In spite of an academic background that began with psychology and biblical archaeology, David cut his teeth as a celebrated chef in Texas during the 1970s and 1980s, helping pioneer haute-health & fusion cuisines in high-end restaurants and hotels. In the 1990s he became a registered dietitian while completing research and coursework toward a Ph.D. in nutrition biochemistry at the University of Texas at Austin. Along the way he taught food science and nutrition while practicing as a nutrition counselor.