Green Means "Go": Premium matcha green tea stands out as an ingredient for both its flavor and function in food and beverage applications

In addition to traditional green tea, Aiya supplies organic matcha for retail, foodservice and industrial customers. The following conversation explores matcha’s growing use in new consumer packaged foods and beverages, its on-trend culinary and nutritional profiles, its role as an ingredient and trending future applications. 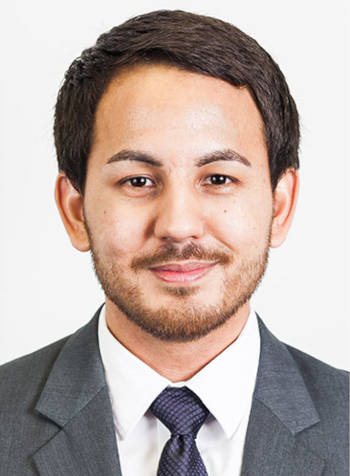 Prepared Foods: What can you tell us about consumer awareness of matcha and its growth as an ingredient?

Consumer awareness of matcha has grown. Five years ago, many people were still unfamiliar with matcha although the concept of green tea was not new. Educating the customer that matcha is a type of Japanese green tea was one of the first steps.

Because consumer awareness was low, companies would avoid the word “matcha” in favor of its easier, well-known translation as “green tea.” A perfect example involved Starbucks. When Starbucks first launched their Matcha Frappe, they called it a “Green Tea Frappe.” Once the awareness of matcha grew, they renamed the drink “Matcha Frappe.”

Matcha is a premium tea, so referring to it by name holds more weight than simply calling it green tea.

PF: What are some of the most common or popular food and beverage applications involving matcha as an ingredient?

Oliveira: In the US, popular food applications revolve around desserts and sweets such as ice cream, cakes, donuts, cookies, chocolate, etc. Matcha especially lends itself well to baked goods, since its powdered form can easily be mixed with other dry ingredients.

The most common matcha beverage applications are lattes and smoothies, especially in the foodservice industry. Also, ready-to-drink (RTD) lattes, smoothies, or healthy juices featuring matcha are popular products. As mentioned, because matcha is a powder, we see it in lots of ready-to-make (RTM) drink powders, including energy blends or protein powder mixes.

PF: You mentioned Starbucks’ application. Restaurants nationwide certainly were hurt during the COVID-19 pandemic. Did you notice the impact on menu development and new concepts involving matcha?

Oliveira: Not per se. During the pandemic, we actually saw more consumers purchasing, consuming, and using matcha in general, which signaled an increased acceptance by US consumers. To be honest, I have not seen any unique concepts in the US because majority of these concepts already have been done in Japan. Matcha is ubiquitous in Japan and can be found in a multitude of products. However, it is encouraging when brands and individuals take the leap to try something unconventional in the US market, such as matcha in savory applications.

Prior to the pandemic, natural products companies were taking a leap by integrating matcha into other functional ingredient formulations. As an example, we have seen matcha mixed with apple cider vinegar, collagen, and other similar ingredients.

PF: What can you tell us about Aiya’s industrial line of matcha ingredients. You mentioned at the beginning that it comes as a powder.

Oliveira: Correct. Matcha only is available in a powdered form. It is derived from green tea leaves that have been pulverized into a powder. Aiya’s tea sommeliers expertly blend these powders to create multiple organic and conventional grades for food, beverage, nutraceutical, and other applications.

PF: What are food and beverage formulators’ most common questions or concerns about incorporating matcha?

Oliveira: Most questions involve the usage amount or how to incorporate matcha powder with other ingredients during production. A little goes a long way when formulating with matcha. Every client is different, so we do our best to educate them and answer their questions. It is something we have been proudly doing for more than 10 years in the US.

PF: More consumers are turning to better-for-you functional foods and drinks to take better care of their own health. What are functional or nutritional benefits most closely associated with matcha?

Oliveira: There are three main health benefits associated with matcha green tea. The first of these is a natural energy boost. Match contains natural caffeine from tea, as well an amino acid called L-Theanine. L-Theanine allows the body to slowly absorb the natural caffeine, creating a timed release of energy over a longer period. This prevents the spike and crash that is normally experienced with coffee, energy drinks, or other caffeinated drinks.

Finally, matcha is rich in antioxidants and contains more antioxidants per gram than many other antioxidant-rich superfoods—including blueberries, pomegranates, dark chocolate, etc.

PF:  What types of product applications incorporate matcha for functional benefits? Can you share an example or two?

Oliveira: Because of Matcha’s many health properties, it is a popular addition in energy drink formulations—both in RTD liquids and ready-to-mix powdered forms. The caffeine from the tea also provides a natural source of energy. Matcha also is commonly found as a functional ingredient is in energy bars and protein bars. 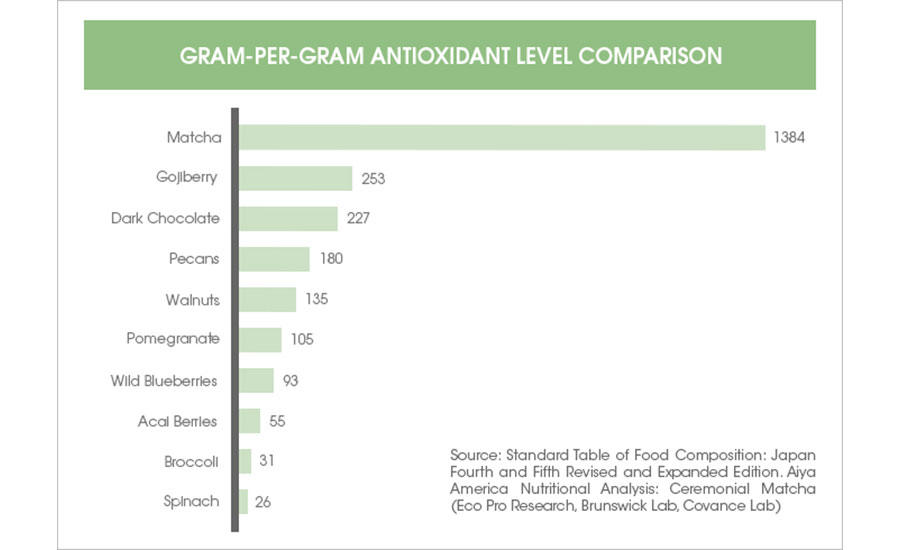 Gram by gram comparison of matcha to other antioxidant sources (Click on image to enlarge.)

PF: Do you have any thoughts about where matcha might be used in a new and different applications in 2022?

Oliveira: We’ve mentioned matcha in perhaps more interesting savory applications. Likewise, with the trend of functional ingredient applications, we expect even more activity in formulating matcha in functional products. As I noted earlier, we’re seeing combined with other ingredients, such as apple cider vinegar and collagen.

The beauty of being a global leader in matcha production and supply is that we (Aiya) are not pressed to come up with new applications. Rather, many of our buyers and clients drive innovation by introducing matcha to their products or discovering new applications. Food and beverages continue to be quite a promising sector for matcha.