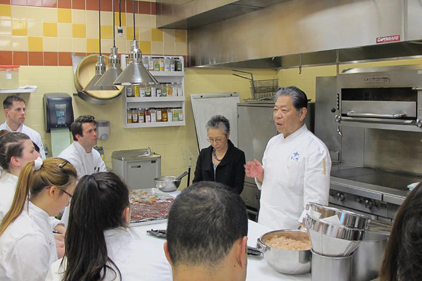 Umami has become a trendy term in gastronomy. It is a subtle taste that is present in all cuisines with a time-honored history. Although restaurant chefs often utilize umami ingredients, culinary students often are unfamiliar with the subject.

About 130 students at CIA’s Hyde Park, N.Y., campus learned that umami is the fifth basic taste, exemplified in the rich taste of a chicken broth, tomatoes, or cheese—that leaves a lasting sensation on the tongue. One of the components responsible for umami taste is the isolated amino acid glutamate. Together with nucleotides such as inosinate and guanilate, glutamate intensifies and harmonizes other flavors while enhancing the complexity of a dish.

Dr. Ninomiya explained the science of umami taste. Then CIA students learned the technique of dashi making in Japanese cuisine with Yoshihiro Murata. As the third-generation owner of the century-old, three-Michelin star kaiseki restaurant Kikunoi in Kyoto, world-class Chef Murata has dedicated his life to teaching the foundations of Japanese cuisine. His message at the packed CIA lecture hall was that Japanese cooking aims for balance, and there is nothing better to achieve this balance than dashi, soup stock with the clearest umami taste.

Chef Murata explained that chefs in Kikunoi use dashi in all forms of cooking. Dashi is a pure mixture of umami compounds: glutamate from kombu and inosinate of the dehydrated and fermented bonito flakes. He said the pure and clear umami taste in dashi draws out the original flavors of ingredients without overdoing it.

Kyle Connaughton, best known for his former role as a head chef of research and development at the three-Michelin star restaurant The Fat Duck, demonstrated umami taste within the context of American cooking. He explained how the technique of fermentation often used in Japanese cuisine highlights umami taste. He said this technique is spreading as a trend among renowned American chefs, as demonstrated by David Chang's fermented chickpea paste (inspired by traditional Japanese miso).

Students sampled a cherry tomato and were then asked to describe the lingering umami taste. Students also tasted a number of clear broths. Using a mild vegetable soup with a very low salt content, Dr. Ninomiya demonstrated that a small quantity of the umami seasoning, monosodium glutamate, is able to intensify the saltiness with a very low final impact on total sodium, one of the health benefits of umami compounds.

Another property of umami that the Japanese cuisine has mastered is its complex and somewhat mysterious effect on blending and harmonizing all other flavors. This allows for a rich and satisfying taste without having to rely on fats or oils.

"It's not only about Japanese food," says Velie, "Umami is an important element of gastronomy, even for pastry chefs!"

This story is edited from a submission by the Umami Information Center. Visit www.umamiinfo.com for more details.

The Culinary Institute of America Unveils The Kikkoman Teaching Kitchen