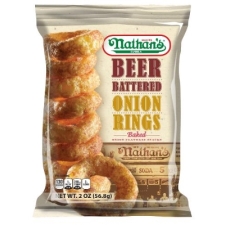 Inventure Foods, Inc. expanded its licensed Nathan's Famous® snack food line with the addition of Beer Battered Onion Rings. The new snack is currently available in convenience and grocery stores nationwide in 2.0 and 3.5 ounce bags with a suggested retail price of $1.99 - $2.49 per package.

Onion-flavored snacks have been a favorite flavor among consumers for some time and the flavor trend is only increasing. The new onion ring snack mirrors the Beer Battered Onion Rings found on the restaurant's menus. Nathan's Famous ready-to-eat snacks began with Cheddar Cheese Crunchy Crinkle Fries, replicating the restaurant's popular side dish, and expanded its offerings with additional flavors.

Nathan's Famous Beer Battered Onion Rings provide a crispy, crunchy onion snack that looks and tastes like the real thing as a result of a proprietary extruded process that is baked instead of fried. The result is a light, yet hearty onion ring snack with only 140 calories per serving. Additionally, the snack is gluten free with zero trans fat.

"We've had much success producing onion-flavored snacks across a few of our product lines. As a result of our success with those products and the recent onion trend, it was a natural move to develop a snack which paralleled Nathan's Famous' popular onion rings," said Steve Sklar, senior vice president and general manager for Inventure Foods, Inc. "We believe we've hit the mark with the new Beer Battered Onion Rings snacks and look forward to a positive consumer response."

Ruffles with the Flavor of Onion Rings