Vegetarians, vegans, and especially flexitarians are increasingly turning to plant-based options to take the place of meat and dairy.

Although it sounds like science fiction, cell-based meat (formerly called “clean meat” and “lab-grown meat”)—animal cells grown outside the animal—is fast approaching commercialization. For chefs and food product developers, cell-based meat will have two stand-out benefits.
The first is that cell-based meat is produced without slaughter, leading to an inherently cleaner product.

Cell-based companies will be producing just muscle meat, not offal, brains, blood, or intestines. No intestines means no feces, therefore no fecal contamination. Contaminated animal products kill thousands of people every year and make millions sick. The problem is almost universal: In a recent test conducted by Consumer Reports, bacterial contamination was found on 97% of chicken. Consumers are told to handle raw chicken as if it is toxic waste. And, in a way, it is. Cell-based meat will have none of those fecal contamination concerns. The second advantage is that cell-based meat fulfills a number of rapidly expanding consumer demands.

A 2018 Food Demand Survey by Oklahoma State University’s Department of Agricultural Economics revealed that 47% of respondents want to ban slaughterhouses. The same number also supported banning factory farming of animals, and 68% said they “had discomfort” with the way animals are used in the food industry.Not only does a majority of people want cell-based meat, polls show that 40% are willing to pay a premium for it. When

consumers can enjoy a meat, poultry, or seafood product that is the same in terms of taste, texture, price, and convenience, but without factory farms and slaughterhouses, they will be happy to align their choices accordingly. And the first products that fill this demand will gain a significant advantage in the marketplace.

David Welch, PhD, is the director of science and technology for The Good Food Institute, a strategic group working with developers and innovators to create and support cell-based meat and plant-based alternatives to animal products and develop foods that are “more delicious, safer to eat, and better for the planet.”

Dr. Welch can be reached through the GFI website, www.gf.org.

According to a recent study by research group Culinary Visions, the growing national love affair with piling vegetables and fruits on their plates continues to gain momentum. The veg-centric food trend is driven by consumers’ desire for healthier foods and the belief that produce-centric meals are better for them. Veg-centric cuisine is not the same as vegetarian or vegan food. The study polled 1,500 consumers and found that 88% of those surveyed want to get more fruits in their diets, and 87% say they want to eat more vegetables. But more plants on the plate doesn’t mean consumers opt to forgo meat: 82% of consumers surveyed say they love meat. While seemingly contradictory, it goes a long way to explain the big jump in interest for plant-based meat analogs that hit all the organoleptic and nutritional demands of today’s diner.

While globally, hundreds of millions of people are vegetarian or vegan, in the US the number of strict plant-eaters, while having tripled in a generation, remains low. In 1994, a poll by the Vegetarian Resource Group (VRG) found 1% or less of US adults—approximately 2 million people—were vegetarian or vegan.

The same poll conducted in 2016 found 3.3% of US adults, or approximately 8 million people, classified themselves as vegetarian or vegan. Stratified by age, the poll revealed that 5.3% of adults age 18–34 were vegetarian or vegan, suggesting younger generations are choosing more plant-based diet patterns. Yet the 2016 VRG poll also found that the combined number of US adults who “sometimes” or “always” eat meals without meat is an impressive 37%.

Being so much higher than the number of strict vegetarians, this—and near double-digit growth in sales of meat alternatives (already closing in on three-quarters of a billion dollars per year)—indicates substantial and continuing interest in, and demand for, plant-based alternatives to animal proteins. 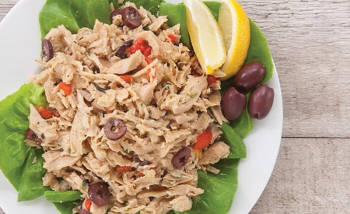 Declaring itself “on a mission to provide ocean-friendly, plant-based seafood options for everyone,” SeaCo Foods International Inc.’s Good Catch brand recently secured nearly $9 million in funding to allow it to move forward, “tapping into the food-tech zeitgeist with a line of culinary-driven, fish-free seafood as the world braces for the collapse of global fisheries before 2050.” The company makes “plant made, chef-mastered” tuna and other seafood analogs from legumes and algae.

Noting that nearly 90% of large predatory fish stocks are depleted, yet serve as the world’s largest source of protein, with more than 3 billion people consuming marine life as their primary protein source, Good Catch recognizes that “alternative proteins are poised to command a third of the protein market by 2050.”

Good Catch co-founders and co-CEOs Chris Kerr and Eric Schnell issued a statement noting, “The relentless and indiscriminate killing of marine life is devastating ocean ecosystems,” and pointed out that when it comes to this global concern, “time is not on our side.” Accordingly, state Kerr and Schnell, “the only truly sustainable seafood is seafood that allows fish to remain in the ocean. It is abundantly clear that we need a new approach to seafood.”

David Grotto, MS, RDN, is the senior nutrition manager of specialty channels and frozen products for the Kellogg Co.’s Morningstar Farms brand. He has more than three decades of expertise in nutrition, health, and marketing throughout the nutrition and food industries.

Grotto also is an adjunct instructor in complementary and alternative medicine at Benedictine University in Greater Chicago, where he lives with his wife and daughters. The best-selling author (101 Foods That Could Save Your Life; The Best Things You Can Eat, 101 Optimal Life Foods, etc.) and the man who coined the term “guy-etitian” for the handful of male dietitians in the world can be reached at David.Grotto@kellogg.com or through this magazine.

David Feder, RDN, has been a food, nutrition and health journalist for 26 years. In spite of an academic background that began with psychology and biblical archaeology, David cut his teeth as a celebrated chef in Texas during the 1970s and 1980s, helping pioneer haute-health & fusion cuisines in high-end restaurants and hotels. In the 1990s he became a registered dietitian while completing research and coursework toward a Ph.D. in nutrition biochemistry at the University of Texas at Austin. Along the way he taught food science and nutrition while practicing as a nutrition counselor.