Prerequisites for product creation in this category include focusing on the molecular makeup of ingredients, and the processes that will be deployed in manufacturing

Today’s consumer recognizes that Asian Cuisine is made of a complex web of interrelated relationships of molecular compounds, ingredients, cooking methods and techniques within cultural contexts that are at the same time unique and similar in resulting flavor experiences.

When embarking on creating a modern Asian or Asian-style formulation for production, it’s important to start with the building blocks of the flavorful cuisines across Asia. Also critical: knowing the ingredients such as lemongrass, galangal, okara, miso, as well as the various types of spices, soy sauces, chili sauces, and others that distinguish Chinese from Vietnamese from Thai culinary formulations and other traditional styles. Only then can a developer recognize how best to translate them into delectable meals for mass production, without losing the genuine flavors of Asia.

As consumers seek more robust flavor experiences, prepared food manufacturers have the opportunity to tell the story of the product through colorful packaging treatments and photography, and use marketing techniques such as supplemental websites to engage with their customers and deliver a multiple touchpoint relationship.

The prerequisites for product creation in this category include focusing on the molecular makeup of ingredients to be used, the processes that will be deployed in manufacturing, and packaging for the new product in this category. But to truly help deliver on what today’s consumer is looking for – the genuine flavors from the cuisines of Asia – it is equally important to acquire a deeper understanding of the cultural context of the proposed formulation.

Branching out, one may also include Northwest Asia (Iran, Afghanistan, Turkey, Israel, Syria, Turkey, and Lebanon), generally known as the Middle East. The region is part of Asia and boasts some of the most ancient, complex, and recently celebrated cuisines of that continent.

Fresh aromatic elements, such as lemongrass, ginger, and its rhizome cousin galangal can provide a window into how ingredients that are universal to the regions of Asian cuisine styles are treated differently in each, and for different reasons. These ingredients provide unique form and function that are dependent on not only the recipe but its country of origin. The peanut sauces of Asia and how they incorporate lemongrass is a good example.

For Malaysian peanut sauce, the lemongrass is finely pounded or ground into the spice paste and fried. In Vietnam, it is minced to provide a burst of flavor. In Thailand, it is common to have more evidence of the fibers, such as can be found in Thai red curry paste. However, in Thai tom yum soup, the stalks are sliced and crushed slightly in large pieces that are left intact when served.

Ginger, too, may be sliced, minced, shredded, or grated. It can be incorporated early in the recipe stages or late for a distinct, spicy flavor punch. Galangal, the most pungent of the three, can be used in small and subtle amounts in a stock, or appear at the table in thick slices floating in some versions of Thai soups. Aromatic galangal is pounded into Thai curry pastes, the most common curry paste consumers buy and use in prepared foods.

A common denominator in the cuisines of ancient cultures (and modern regions still developing) is the lack of cold preservation. Fermentation is a global tool of preservation and flavor development. Fermented sauces, such as soy sauce and chili sauce, are classic and universal turn-to ingredients that fit this bill.

When creating or adapting a recipe using soy sauce, the chef should focus first on why it is in the recipe; that is, what will be its function beyond flavor? From there, the focus is on how it will impact the rest of the recipe’s organoleptic properties and what will be necessary to replicate the desired flavor experience. Parameters include color, sodium level, coating ability, or any combination thereof.

Soy sauce is a building block of flavor. A recipe that merely calls for “soy sauce” says little. What type? Light, dark, sweet, thick? From what country? Sweet Chinese soy sauce is flavored with cane sugar, whereas Indonesian kecap manis is flavored – and color-enhanced — with palm sugar and boasts a more complex flavor and thicker viscosity. Such differentiations can be a stumbling block for the commercial research chef.

The same cautions for avoiding soy sauce generalization apply to soybean paste. The fermented mash of soybeans is different not only from one country to another but across prefectures, towns, or even barrel house. Japanese miso is not Korean doenjang or Singaporean tacau.

While all three of these examples start with fermented soybean paste, the duration of fermentation, use of salt or koji (spores of the fungus Aspergillus oryzae), koji rice, or other ingredients alter the color, flavor, and intensity of each.

An example based on just such a nuance can be found in the crafting of the classic Indonesian appetizer of grilled beef skewers. Since kecap manis is rarely available as a commercial ingredient, the challenge to a developer wanting to create it without the key ingredient would be obtaining the recipe’s iconic sweet glaze. Thus, a substitute is necessary.

Getting the reimagined glaze to taste and look like the “real deal” for this dish can be done by drawing on common ingredients already in inventory, such as granulated cane sugar, molasses, and dark soy sauce. If these ingredients are artfully combined, the resulting glaze could closely approximate the elusive Indonesian variety.

One solution, developed through multiple tastings, was a combination of granulated coconut palm sugar, light soy sauce, maple syrup, and molasses that created the closest match for the final product. Although these are not the traditional ingredients, developers found that the final prepared food will taste most like the original. 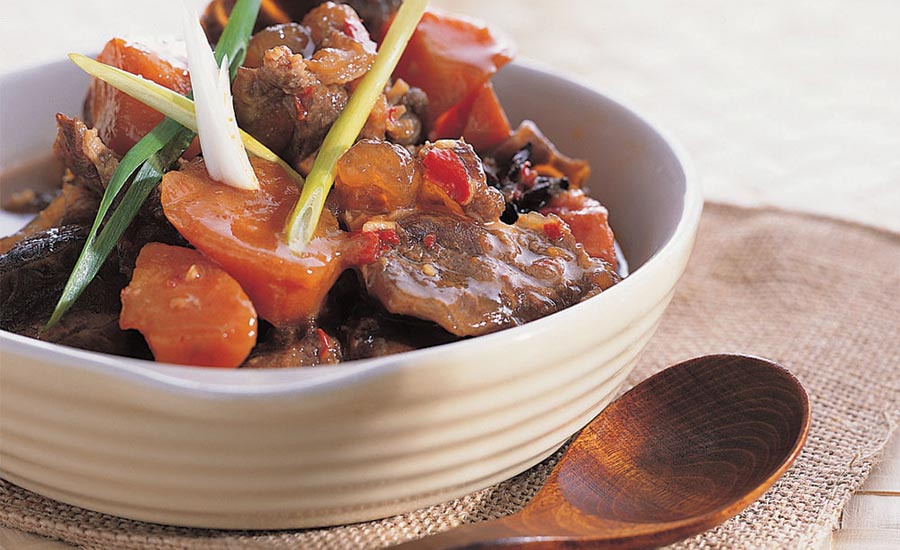 Celebrating regionality and telling the story within a cultural context through ingredients constitute the proverbial “sweet spot” for promotion in today’s marketplace. And with the modern American consumer craving more and hotter spice than ever, chili sauces are ripe for culinary exploration.

While most consumers of Asian cuisines understand that Sichuan is a type of Chinese cuisine, and as experienced in restaurants indicates a cuisine made with hot peppers, marketable differentiation can come from diving a little deeper into the soul of Sichuan food, with a documented history dating to the 16th century. One point of authenticity is the province’s variation on the Chinese salty bean paste doubanjiang, known as Pi-xian chili bean paste.

For Pi-xian bean paste, fermented broad beans (fava) are combined with fermented chili peppers and allowed to mature for several years. The result is an umami “bomb.” Fortunately, today’s product developer can deliver on this authenticity since commercially available, clean-label versions have finally been imported in bulk from China. Pi-xian lends a more concentrated accent to a dish and greater depth of flavor. A popular application is Pi-xian Chicken Stir-fry.

Similar is the more ubiquitous — and highly trendy — gochujang from Korea. This sudden superstar has the advantage of being a national symbol as well as less spicy than Pi-xian, so it has been employed to create a clearly “Korean” culinary identity. Its smooth texture, flavor bolstered with fermented soybeans, yeast extract and sometimes even roasted rice power.

By Any Other Name

As professionals, R&D teams recognize the indispensable nature of accuracy and precision. For that reason, one of the first steps a development team can take is to forget the nonsensical term “Asian Cuisine.” It’s folly to try to summarize thousands of years of history, agriculture, tradition, artisanally crafted food and beverage knowledge, expressed throughout hundreds of thousands of restaurants representing more than half the world’s population (4 billion plus) in 48 countries. It’s much better — and more accurate — to refer to “the cuisines of Asia” rather than Asian Cuisine.

Presentation of a dish is more than a matter of convenience. It is the cultural context of how that food is served, eaten, and celebrated. Factors such as the thickness of a sauce, size and shape of components, and region of origin will influence the choice of vessels and cutlery as well as circumstances of eating.

In the prepared and packaged food industry, this brings challenges in trying to deliver authenticity. Candidly, this is somewhat out of the hands of the manufacturer, if not wholly unattainable.

The climate of the cooking environment can have dramatic impact on a recipe’s flavor. A bowl of noodles assembled on a humid May day in Malaysia using room-temperature ingredients would certainly come out measurably different from a similar dish with the same ingredients prepared on a dry December day in Denmark. For processors, noting such details as the desired conditions of the manufacturing region will help ensure greater success of the final product.

Depending on the specific consumer, market segment, product category, retailer, and so many other variables, crafting today’s Asian-influenced formulations is a complex undertaking. Today’s prepared food maker can get a head start by better understanding all the various and colorful cuisines of Asia rather than focusing on what’s currently trendy. With an entire continent and centuries of flavor traditions to mine, the next trend might be theirs for the making.

Originally appeared in the July 2020 issue of Prepared Foods as America's New Asian.

As a 30-year veteran of the food and beverage industry, Chef Robert Danhi has worked as restaurant chef, chef-instructor for the Culinary Institute of America, and consulted for multiple Fortune 500 companies. He is an award-winning author (Southeast Asian cookbook) and TV host. He is an industry thought leader in innovation, having founded theFlavor360™ software platformand launched Flavor360 EXPLORE, the first of three initial mobile apps designed to save time, improve data quality, and capture into one database the tribal knowledge of organizations at every stage of the R&D process. He can be reached through his company’s website, www.flavor360software.com.