Despite a troubled economy, the U.S. market for sauces remains bullish, as Americans find room for hot (and other) sauces. 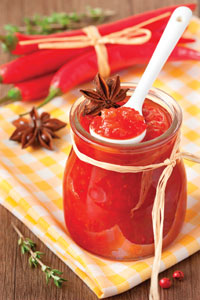 The market for sauces in the U.S. has become notably more heated in recent years, both in terms of sales and flavor. Sales, courtesy of a troubled economy that has seen consumers increasingly turn to cooking at home as opposed to dining out, have therefore surged in supermarkets and groceries.

In terms of flavor, manufacturers are capitalizing on Americans’ diversifying palates. Some would even contend aging consumers are demanding hotter and hotter flavors to provide the “kick” they have come to expect.

Regardless, Americans as a whole are finding room for hot sauce on a regular basis, to the point that hot sauce production is among the 10 fastest-growing industries in the U.S., according to a report from IBISWorld, an industry and market research organization. The firm has compiled a list of the 10 industries it expects to outpace the rest of the U.S. economy through 2017. Hot sauces placed at number seven, amid social network game development and “green” sustainable building production.

The firm predicts hot sauce production in the U.S. will reach $1.3 billion annually by 2017, and this is a segment that has seen strong year-on-year growth for a decade. In fact, the hot sauce segment has enjoyed annual revenue growth of 9.3% a year for the past 10 years, driven, contends IBISWorld, by demographic consumption trends, immigration and international demand from Canada, the UK and Japan.

Despite the, ahem, hot nature of the category, IBISWorld does believe hot sauce’s rapid growth will slow over the next five years, but it should still grow at an average annual rate of 4.1%.