Prepared Foods: How has grilling changed in the past five years?

Anthony Seta: Consumers love grilling. When taking a naturally less fatty protein, such as turkey, and adding flavor with marinades and seasonings, it gives consumers a healthier option.
Overall, however, I would not say grilling has changed. Instead, I would say grilling has expanded. Chefs now view grilling as a blank canvas. They pull from their ethnic backgrounds and trends to incorporate flavors into grilled dishes they present on menus. 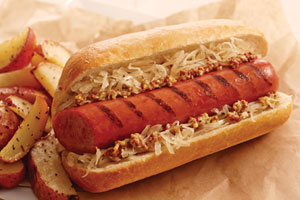 PF: What factors have most influenced that expansion?

Seta: I attribute strong interest in grilling to four factors: equipment, food channels, global exposure and even global conflict. To the first point, chefs now can access grilling equipment that is more efficient and multi-purpose. We can grill, smoke and bake in one piece of equipment. Meanwhile, I think consumers and restaurant patrons stimulate the grilling trend because their knowledge has been enhanced by trends they see on food [television] channels, which have a number of programs dedicated to specifically to grilling. Consumers are traveling more and they are exposed to a wider variety of foods and have developed cravings for grilled flavors from around the world. Lastly, I’d say war has been a major contributor to the flavor trends in the U.S. and around the world. For example, Americans have become very fond of ethnic flavors due in part to World War II, when soldiers were exposed to and acquired tastes for French, Italian, German and Japanese cuisines.

Similarly, today’s brave men and women—deployed all over the world—bring their newly developed cravings for ethnic food back to the U.S. Due to more recent exposure to the Middle East, trends in foods and flavors are increasing in Mediterranean and Middle Eastern flavors, such as hummus, pita, gyros, shawarma, etc.

PF: How are grilled foods changing?

Seta: Beef, pork, and chicken and seafood have been mainstays for grilling. I’d add that Butterball’s R&D team works diligently to develop turkey products as well. In fact, we have a foodservice turkey chop that performs very well on the grill. These turkey products are opening the door for the use of turkey all year round and not just for the holidays.

PF: What do you notice about grilled references on restaurant menus?
Seta: Menus and the servers are a restaurant’s front line to quickly stimulate product interest. Terms used to describe the food on a menu are extremely important. Words such as “slow smoked,” “flame kissed,” “plank grilled,” “beer basted,” “coffee rubbed,” “Memphis rubbed” or “Applewood grilled” are popular and they inspire patrons to select grilled options.

PF: Do you have any advice for other corporate chefs or food scientists?

Seta: My advice to chefs and R&D professionals would be to keep in mind that grilled meats, especially turkey, are finding significant positions on menus today for a number of reasons. Products to be grilled already are portion sized. They can maintain the word “fresh.” In foodservice applications, each portion can be prepared to a guest’s individual tastes while it maintains a chef’s creativity. Grilled products also add variety to the menu because the preparations and flavors may be easily changed to keep up with the trends.

Matthew Jost, CEC, CBJ, is Culinary Chef of National Accounts for the Kraft Heinz Co. With a degree in Culinary Arts from Kendall College, and completing a degree in food science from Kansas State University, Jost is also a certified barbecue judge for the Kansas City Barbecue Society. Having worked for nearly two decades at some of the top restaurants in the US, Jost came to Kraft/Heinz from the restaurant division of Weber-Stephen Products LLC, where he was corporate R&D chef and Chef of the Weber Grill Academy. He is one of only five “Certified Weber Grill Experts” in the world, having logged more than 1,000 hours cooking, smoking, and roasting on every type of grill Weber makes. He can be reached at matthew.jost@kraftheinz.com or through this magazine.