How research chefs are moving consumers closer to plant-centered eating

Plant-based is here to stay. In fact, it likely will be even more of a wave in the future, due to the growing desire among consumers to cut down on, or completely eliminate meat consumption for health and/or out of concern for the environment.

The numbers back this up: In a 2018 study conducted by Nielsen, nearly 39% of Americans said they were attempting to incorporate more plant-based options into their diets. This year, a study by the NPD Group indicated that figure rose to about 60%. In addition, a study conducted by Ipsos Retail Performance revealed that more than 9.7 million Americans follow plant-based diets, up from just 290,000 in 2004.

At once supporting and driving this surge are remarkable technological advances in crafting plant-based products that mimic the texture of beef, chicken, fish, and dairy. Developers of such analogs are using everything from soy, pea, and chickpea protein isolates and concentrates to hemp-based proteins, mushrooms, algae, nuts, grains — and even tomatoes — to create new products.

But the plant-based revolution is about more than just analogs for animal proteins. Vegetables are moving to the center of formulations traditionally made from processed grains. Examples include such products as pizza crusts, breadsticks, and “rice” from cauliflower and pasta from artichokes and broccoli. Meanwhile, vegetables are increasingly replacing significant portions of traditional items, successfully sneaking their way into frozen desserts, cookies, sandwich bread, and beverages.

Almond milk. Oat milk. Coconut milk. Soy milk. There are plenty of plant-based milks on the market, but the questions for R&D chefs are, can it withstand heat? Does it foam and froth? Does it blend? Some of these products accomplish these goals; others, however, do not. For one research chef, the solution to all three challenges is pea protein-based milk.

“Pea protein-based milk can be a 1:1 replacement for traditional cow’s milk in recipes and it emulsifies great,” says Dan Follese, owner of Food Trend Translator, an independent culinary consultancy. “It also has a neutral flavor, whereas almond milk can have some sweetness to it and oat milk has a little bit of earthiness and can taste like the milk at the bottom of the cereal bowl.”

Textured pea protein is an option that can provide food formulators with a greater range of choices for most applications. Ingredient technologists have developed pea protein systems specifically suited for use in vegetarian/vegan applications, as well as in blended products. They make an excellent extender for meat as well, providing both the appearance, texture, and mouthfeel of meat for consumers who desire the sensory attributes of meat in a plant-based option.

Follese uses pea protein milk in a variety of food and beverage creations. He uses it to add creaminess to salad dressings, for mac n’ cheese, casseroles, creamed mashed potatoes, and dips such as from artichokes and spinach. In gravies and sauces, Follese relies on pea milk more as a neutral-tasting, liquid thickener similar to traditional dairy milk or cream. “Pea protein has an inherent strength in the cellular structure that gives it a lot more functionality than other plant-based proteins, too,” Follese adds. “This means it foams easily. I can heat it for foaming lattes and cappuccinos, or even make a cold foam as a topper for soups and salads. I even use it to make a traditional milk tea because it doesn’t add any off flavors and allows the tea flavors to shine through.”

Although analogs are just a part of the plant-based movement, plant protein is still a critical facet of it. The pea protein market, for example, is expected to reach nearly half a billion dollars by 2025, according to Meticulous Research. Research from Global Market Insights predicts dairy alternatives will top $37B in the same time period.

“The consumers driving sales of products like the Impossible Burger and Beyond Meat products, etc., are those who want something that eats like meat, but is plant-based,” says Webb Girard, MSc, director of research and development for CuliNex, LLC. Girard notes that texture is the first attracting factor, and that the creation of successful analogs has been accomplished through good food science. “But it’s ultimately flavor that keeps consumers coming back for more.”

To maintain the continuous flow of plant-based products, product developers must constantly “think outside the bun.” “Our job as research chefs is to think beyond the form or packaging that the base products usually take and come up with other uses for them,” says Girard. “What else can we do with these new protein formats other than simply make [fake] burgers or chicken tenders?” 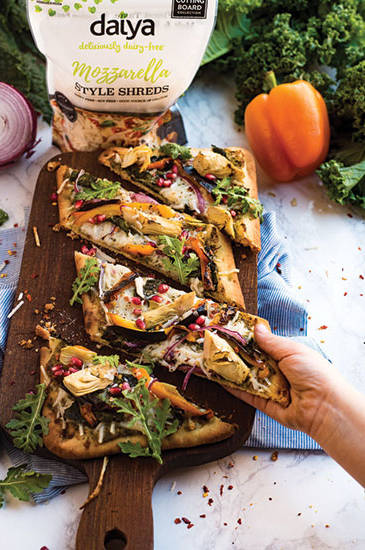 One of the biggest challenges in creating dairy analogs is in crafting them with performance that carries through the harshest processing conditions. PHOTO COURTESY OF: Daiya Foods, Inc. (www.daiyafoods.com)

When using plant protein-based analogs for more complex formulations, such as entrées, sides, and appetizers, two main challenges arise: flavor and aroma. Some textured and formed plant-based ingredients can have off-flavors and aromas when used as more than a simple replacement on a bun.

“Pea protein can end up with a slightly grassy and bitter taste,” explains Justin Kanthak, research chef and segment director of snacks at Griffith Foods, Inc. “Step one is to get the substrate, step two is to determine the specific off-flavor notes and neutralize them, and step three is to find ways to enhance and build upon the positive flavor notes. There is no one-size-fits all, but following each of these steps will help define and enhance the target taste.”

There are multiple pathways for product developers to choose from when taking plant-based ingredients through the steps outlined by Kanthak into a multilayered formulation. Experimenting with a variety of spices not only helps control and balance flavors and aromas but offers chefs and food makers the opportunity to follow food trends such as incorporating bold and global flavors that continue to grow in popularity.

Exotic spice blends can be especially effective in this manner, due to their singular characteristics and unfamiliarity. Jeffrey Schlissel, chef-owner of Bacon Cartel, reaches for togarashi, a Japanese blend of seven spices, including chili peppers, roasted orange peel or lemongrass, sesame, and ginger. The result imparts a complex, sweet-savory pop of flavor.

Applying herbs and spices to bring out the best — and hide the not-so-best — attributes of a plant protein recipe requires a great deal of trial and error, and thus patience. Using as few spices as possible can allow for subtlety that lets the positive umami flavors natural to some meat, poultry, or seafood replacements come through, while a more complex blend will give a singular depth and aroma that will play off of multiple textures in a final product.

More recently, Baggs has been trying out fresh marjoram when making plant-based burgers with Portobello mushroom caps substituting for buns. “Mixing plant-based proteins with a more diverse variety of vegetables, herbs, and superfoods can add texture and taste to a dish, not to mention color,” he says. “For example, you could create an ancient grain bowl with plant-based proteins, dark green vegetables, and incorporate some sriracha to bring it all together.”

Sauces of all types help build upon a “neutralized” plant-based product to unify and enhance flavors. The familiarity of the sauce’s flavors can extend to the faux animal protein and act as a sort of “trompe l’oeil” — or, rather, a trompe l’langue — and enhance the flavor perception of that ingredient. For example, Kanthak marinates chicken strip analogs with piri piri, a spicy and tangy South African sauce made from African bird’s eye chili peppers.

Heavier sauces can function in the same manner, but care must be taken to keep the balance on the texture and flavor attributes of the main ingredient. A classic Bolognese-style sauce, where there’s more interplay between the faux ground meat and the rich tomato sauce, is one example promoted by Baggs. Stroganoff is another: “I like savory sauces like Stroganoff that you can enrich with mushrooms, sour cream, and paprika,” he explains. 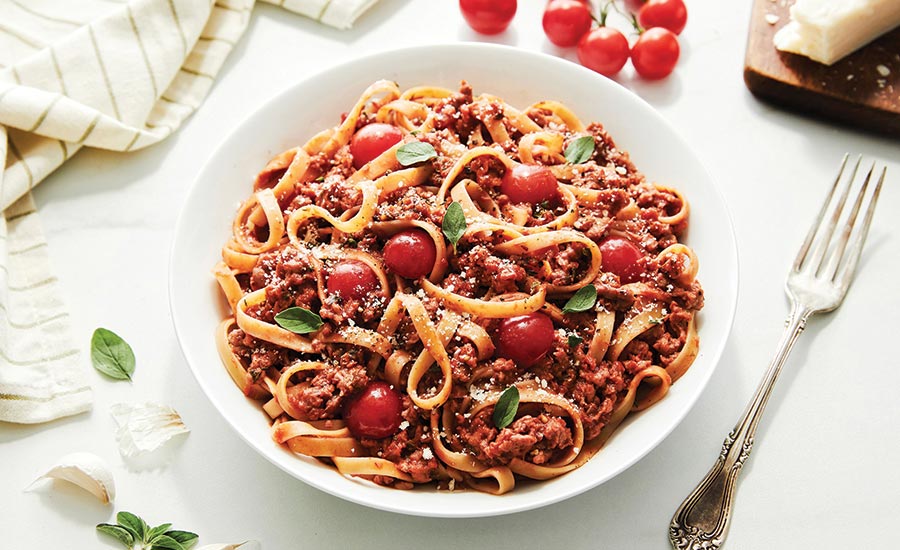 Schlissel agrees with the Stroganoff approach. He makes a 100% plant-based Stroganoff sauce by crafting a dairy-free béchamel using vegan cream cheese and cooking down a mushroom duxelle until thickened, instead of using meat-based stock. This is also an excellent illustration of how encompassing a completely plant-based direction in formulation can be.

Farshid Shadnia, R&D technical manager for Giraffe Foods, Inc., creates cold sauces from vegan mayonnaise and uses aquafaba (the broth from soaked chickpeas), which acts as an emulsifier, to replace eggs in vegan products. Aquafaba can also work as an egg substitute for egg-based sauces, although some plant-based stabilizers might be necessary to add in order to maintain the integrity of the finished result during the freeze/thaw/prepare cycle.

Chefs are finding inspiration from Asian cuisines, sources that have a long history of working with plant proteins ranging from tofu and tempeh to mock meat, poultry, and seafood. Baggs points to char siu sauce, a sweet and savory Chinese barbecue sauce made with hoisin, honey, soy, and Chinese
five-spice powder.

Shadnia sees such sauces as the perfect way to balance off-notes from soy and pea products. “Gochujang and harissa have been popular, and now we’re also seeing other global sauces, such as massaman curry, trending.”

Adding umami with some sweetness is an easy way to mask bitter off-notes. “There is a reason why sweet and savory Asian flavors work wonders; it has all the innate fundamentals of sweet, savory, umami, and browning notes to help balance earthen notes,” says Baggs. Think: fish and soy sauce, but also caramelized onions, roasted garlic, and roasted chili peppers. “These are all complex, savory building blocks to use when working with plant-based proteins.”

Schlissel is a huge fan of furikake, a dried seaweed and sesame-based seasoning that can add instant umami to any dish. He often spikes plant-based “crab” cakes with it. Fermented foods, like kimchi and the aforemented gochujang (fermented chili peppers) also spike the savory element. Here’s one suggestion from Schlissel: a Korean fried “chicken” using a plant-based product, coated in a marinade of gochujang with honey, soy, minced garlic, sesame, and green scallions.

The culinary applications for plant-based proteins and dairy-free products are certainly limitless; it’s just a matter of negotiating through possible off-flavors or textures. As more chefs discover these products, the landscape for vegetarian and vegan prepared products with universal appeal will grow. Consumers — even carnivorous ones — are ready to accept plant-based products as long as they are flavor-based as well.

The Rise of Clean Label Leavenings

Amelia Levin is a Chicago-based food writer, cookbook author, certified chef and certified holistic nutritionist. A former news reporter with a background in B2B magazine publishing, she has authored or contributed to nine books and writes for a variety of food industry trade publications. www.amelialevin.com.

The Rise of Clean Label Leavenings