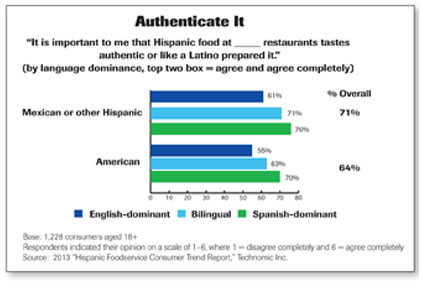 Hispanic individuals currently account for about 17% of the U.S. population, making them the country’s largest racial or ethnic minority group. This follows a 47% surge in the country’s Hispanic population from 2000-2011, based on U.S. Census Bureau and American Community Survey data.
Moreover, consumer research firm Nielsen estimated the buying power of the U.S. Hispanic market at $1.1 trillion for 2011—and that’s expected to grow to $1.5 trillion by 2015. Understanding Hispanic consumers’ foodservice needs and preferences is critical to staying relevant to this diverse and growing consumer base.
What’s important to Hispanic consumers? Authenticity of food offerings, for one—regardless of whether the restaurant concept itself is Hispanic. Some 71% of the more than 1,200 Hispanic consumers polled for Technomic’s 2013 “Hispanic Foodservice Consumer Trend Report” said food at a Hispanic restaurant should taste authentic or like a Latino prepared it; 64% percent said the same for Hispanic menu items at American concepts.
In addition, 44% of Hispanic consumers—vs. 21% of all consumers in an earlier Technomic poll—said they would pay at least slightly more for food described as “authentic.”
Four in 10 Hispanic respondents said there are traditional Hispanic foods they would order more often away from home, if such foods were more widely available.
Leading the list of items they would like to see on menus were rice with beans, menudo (tripe soup), pozole (a Mexican stew), sopes (masa patties with assorted toppings) and arepas (filled corn cakes).
These selections may not yet have hit the mainstream, but they can be found on chain and independent restaurant menus. Menudo, as well as lengua (beef tongue) tacos and machaca tortas, made with shredded beef and eggs, are on the menu at Filiberto’s, a 64-unit chain based in Phoenix. Filiberto’s offers a menu of traditional Mexican favorites alongside more American-influenced fare.
There’s a common perception that Hispanic consumers are significantly more likely to prefer very spicy foods, but Technomic’s research suggests that’s not the case. Just 47% of Hispanic respondents indicated they enjoy foods that are on the spicier side, compared with 48% of all consumers who said the same in an earlier Technomic flavor-trends poll.
Mexican consumers were more likely than those from other countries in Central and South America or the Caribbean to say they prefer to order items with bold-and-spicy flavors. (Moreover, Hispanic consumers are happy to adjust the heat of whatever they order: 79% said they use hot sauce, and one third said they use it on a wide array of foods.)
Less-spicy but still authentically Hispanic items, such as empanadas, are likely to appeal to wide audiences, and in fact are gaining wider exposure. Nine chains that rank among Technomic’s Top 500 Restaurant Chains by U.S. system-wide sales currently menu empanadas, up from four at the beginning of 2012. Among them is bakery-café chain Au Bon Pain, which recently added baked empanadas in spinach, beef, chicken or cheese.
Hispanic consumers’ menu preferences vary based on which region of Latin America with which they identify. For restaurant operators and manufacturers, showcasing the vibrant flavors of classic Latin American ingredients—citrus fruits, herbs, chiles and more—can help demonstrate appreciation for the savory variety of Latin cuisines.
KEYWORDS: authentic Hispanic Hispanic foods

Darren Tristano is chief insights officer at Technomic’s parent company, Winsight. Since 1993, he has led the development of Technomic’s Information Services division and directed multiple aspects of the firm’s operations.