For several years, adding spice to recipes and formulations was all about adding heat. Today, however, consumers like dishes with the juxtaposition of heat select sweet, hot, sour and umami flavors. 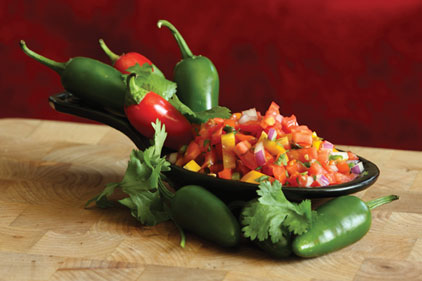 For several years, adding spice to recipes and formulations was all about adding heat. Today, however, consumers like dishes with the juxtaposition of heat select sweet, hot, sour and umami flavors.

Chefs are selecting certain chilies and spices to create pungent, full-flavored, bold and unique flavor profiles that promote more interesting cuisine. Chefs may pair chilies that create instant heat on the tongue with others that bring out heat slowly, in a more earthy or nutty way. For example, this process might combine chilies with tamarind for hot and sweet; or chilies with citrus for a tangy heat.

The influential Millennial generation is helping drive a trend for more interesting flavors. Because the generation has grown up with spicier foods, they demand a flavorful and authentically ethnic approach to various cuisines -- not just blatant heat.1

The nation’s Hispanic population boom also is fueling growing interest in authentic cuisine and flavors.  There are an estimated 52 million U.S. Latinos, which comprise about 16% of the population. Those numbers are expected to grow nearly 25% by 2030, according to Technomic.2

Forecasts say Hispanics will account for 60% of U.S. population growth between now and 2016, and Hispanic food and beverage sales are projected to top $9.5 billion in 2014.3

In the U. S., jalapeño and chipotle peppers lead the growth with top penetration and turn up on menus everywhere. They also appear on grocery shelves in main dishes, marinades, sauces and more.4 These mainstream peppers have created opportunities for lesser-known varieties. Hot and spicy sriracha sauce, featuring hot chilies, is the newest entry in the pepper trend. It has even emerged in the mainstream as one of the top three flavors in PepsiCo’s flavor contest for Lay’s potato chips.

According to Mintel, two thirds of consumers rank authentic, traditional flavors as the most important factor when choosing ethnic foods.5 From a culinary perspective, authentic regional Mexican cuisines -- from Mexico City street vendors to moles of the Oaxaca region -- are major influences in recipe and formulation development.

Mexican peppers, such as green chilies and jalapeños, are prevalent in everything from red and green salsas to gourmet burgers, sandwiches, sauces and condiments. Tacos al pastor from urban Mexican food trucks have slightly less heat, highlighting guajillo, onions, grilled pineapple, chipotles, vinegar and Mexican oregano paired with grilled pork.  The flavors are complex and work well with the addition of grilled, smoky notes.

Sour citrus notes and green mole (tomatillo, green chili, jalapeños) from the Yucatan and Oaxaca areas also have gained popularity. The Oaxaca Valley is the home to seven moles, including unique varieties with various dried and fresh chilies that are strategically combined to offer spice, heat, earthiness and nuttiness. Moles also have nuts, seeds and spice, and a classic mole found in the U.S. includes cocoa.

“The McCormick Flavor Forecast 2014” predicts that two of the top five up-and-coming flavors for 2014 will involve peppers: aji Amarillo, a hot and hard-to-source Peruvian yellow pepper with bold, fruity flavor; and chamoy sauce, a Mexican condiment made from apricot, lime, chilies and spices.

As American tastes continue to progress and appreciate global flavor profiles, peppers will continue to be a key element in main courses, sides, sauces, marinades and other foods. Ethnic foods were an $8.7 billion industry and are projected to grow 20.3% to 2017 to reach $10.5 billion.6 Food formulators should know that peppers are very easy to use and apply to almost any production scenario. That’s because peppers can be fresh, roasted, retorted, frozen or used in the kettle-cooking process and still keep their integrity. Peppers aren’t just on trend, they are here to stay.