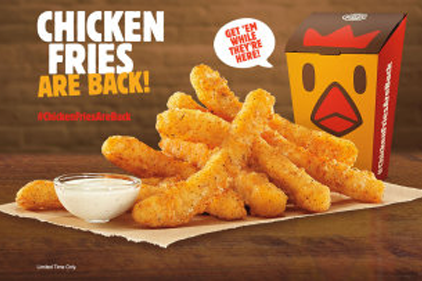 Two restaurant chains—Burger King and Mimi’s Café—are promoting fry side dishes. However, one new offering features poultry while the other involves potatoes.

Back by popular demand, Burger King Worldwide, Inc., Miami, said it is reintroducing Chicken Fries, a menu item that first debuted in 2005 and was taken off the menu in 2012. Available for a limited time, Chicken Fries are made with premium white meat chicken, which is coated in a light crispy breading seasoned with savory spices and herbs. Shaped like fries, Chicken Fries are ideal for dipping in sauces including BBQ, Honey Mustard, Ranch, Zesty, Buffalo and Sweet & Sour, says Burger King.

For its part, Mimi’s Café, Dallas, said it conducted more than 60 days of research throughout France this to develop its made-from-scratch, rustic cut French frites. As a result, the chain has unveiled a new "Frites Grill" menu, featuring classic combinations such as Steak Frites, Roasted Chicken & Frites, Grilled Atlantic Salmon & Frites, and Meyer Lemon Mussels & Frites.

The Mimi's Cafe culinary team sampled authentic French frites and talked with local chefs in brasseries, bistros and Michelin-starred restaurants in Paris, Brittany and Normandy as a foundation for developing their new recipe.

"We wanted our new made-from-scratch frites to be so authentic that they would be worthy of the all-important 'fait maison' certification if our restaurants were located in France," says Executive Chef Katie Sutton, a graduate of the French Culinary Institute.  Fait Maison is a government demarcation certifying that a French restaurant serves house-made cuisine, with particular standards for frites.

Sutton continues, "Authentic frites can be found in some independent restaurants in America, but most casual dining concepts still serve bagged, frozen French fries.  Unique to Mimi's, our new frites are made with Russet potatoes grown on a collective of four family farms in southeastern Idaho that has been growing potatoes since the 1900s."

Officials say the new recipe features thick hand-cut potatoes, larger than a half inch, which are double cooked – first blanched and cooled, then fried to order – yielding frites that are crispy and golden on the outside, and light and fluffy on the inside.  Finally, the frites are seasoned with sea salt and fresh herbs.

Sutton says she also created a selection of herb-infused butters to complement the new entrées, including a 28-day aged New York strip steak with house-made thyme-garlic butter for $17.99, Grilled Atlantic Salmon with lemon-garlic butter and garlic spinach for $13.99, Roasted Half Chicken with rosemary herbes de Provence butter for $15.99, and Meyer Lemon Mussels in a white wine-lemon broth with fresh herbs and garlic crostini for $11.99.