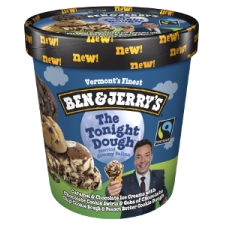 This is the second Ben & Jerry's flavor for Fallon. The last flavor, Late Night Snack, was named after Fallon’s previous hosting gig at Late Night. It featured a vanilla ice cream, fudge-covered potato chips and a salted caramel swirl. Late Night Snack was phased out in 2013 when Fallon took the reins for The Tonight Show.

All of Fallon’s proceeds from the sales of The Tonight Dough will be donated to the charity SeriousFun Children’s Network. Founded by Paul Newman, SeriousFun provides children with serious illnesses and their families with a life-changing experience at camp that fosters confidence, independence and resilience – always free of charge.

The new The Tonight Dough flavor is available in pints for a suggested retail price of $4.89, and at Scoop Shops nationwide.