The UK, in particular, has seen a variety of launches in its crowded smoothie market, but dairy-based drinks are turning up in a host of new places around the world--and in a multitude of forms. 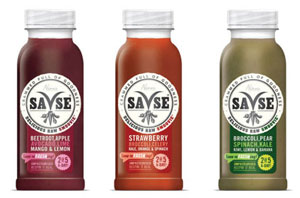 Smoothie manufacturer Savse may be better known in its home country of Georgia, but the Eurasian company has launched a range of smoothies in one UK retailer and plans to add more. Available at Harvey Nichols in London are Savse’s Smoovies, in such flavors as broccoli, beetroot and strawberry, all manufactured using a cold-pressurized production process aimed to preserve the ingredients’ freshness. The line features no sugar or preservatives.
Savse’s launch joins a somewhat-crowded smoothie market in the UK, where Innocent emerged a while ago as a major player—a role likely to increase even more, as Coca-Cola has announced it plans to up its stake in the company. Fresh Marketing, which had been involved in Innocent’s initial growth, has taken its talents into breakfast drink territory. It describes its Liquid Fuel as a milk-based, on-the-go breakfast drink aimed at young male consumers, specifically those who skip breakfast and could benefit from its added B vitamins and fiber. It draws inspiration, to a great degree, from the success of Muscle Milk in the U.S.
Another U.S. smoothie success aims to extend itself. During the next 10 years, Jamba Juice Co. plans what it terms is “a massive expansion” in Mexico, by launching 80 Jamba Juice units, with the first store set to open by the end of 2013.
Meanwhile, In India, ITC plans to launch a range of dairy products during the next year, with options including shelf-stable dairy products, milk powder, packaged milk and fortified milk.