Pulses are gaining traction, especially in certain demographic groups. Nielsen identifies that across all demographics, consumers who predominately eat pulses are women (70%). Additionally, Nielsen discovered that 86% of pulse consumption happens at home. This is a particularly interesting statistic considering that Americans today consume so much food away from home.

Christie Lagally, another senior scientist for the Good Food Institute, sees pulses as a clear opportunity to meet growing global protein needs: “The plant kingdom still is vastly underutilized for the production of protein for direct human consumption,” she emphasizes. “Exploring pulses for the creation of plant-based meat analogs is an obvious area of consideration due to the high protein content of these crops.”

Lagally further notes that pulses offer multiple specific opportunities to establish high-protein crops as a functional and efficient protein delivery system to underserved communities. “This is one of the reasons the UN dubbed 2016 ‘The International Year of the Pulses’,” she says. “In fact, chickpeas are getting a lot of interest from milling companies and investors recently.”

Milk alternatives occupy a category that long has been a fulcrum of plant-based protein trends. Soy, rice, almond, and coconut versions of liquid dairy substitutes have been popular for decades, and remain so. However the Canadian Health Food Assn. and other industry experts predict that hemp, flax seeds, hazelnuts, and cashews will become more popular options. They can be formulated into extremely creamy dairy-milk mimics, yet are low in calories.

Compared to nut- and soy-based dairy alternatives, flaxseed products, such as the ones used in beverages at Good Karma Foods, have specific nutritional advantages. Flax is high in omega-3 fatty acids, specifically alpha-linolenic acid (ALA). One serving has 1,200mg of this healthful plant-based lipid.

Many tree nuts, such as almonds, while technically high in protein in general, only yield about 1g protein per 8oz serving of milk. For this reason, protein from other sources, such as peas, is often added to dairy analogs to help boost the protein content. Milk analogs also typically are supplemented with important nutrients such as calcium and vitamin D, giving them as much or more of the vitamins as dairy milk.

Care must be taken with mineral fortification, however, when using pea protein. Soluble calcium and magnesium can force precipitation and cause graininess when pea protein is used in beverages. This highlights one of the key challenges of protein-supplemented beverages: solubility.

In recent years, analogs of other dairy products, such as cheese and yogurt, have been developed to meet the growing demand for plant-based protein products that mimic the animal-based originals. Cheeses from soy, tree nuts, and rice have become increasingly popular.

Miyoko’s Kitchen Inc. has taken this category to the next level with its line of artisanal vegan cheese analogs. The company offers a range of products, flavors, and textures, all certified organic and non-GMO. “Currently, as an artisanal cultured vegan cheese producer, we are using primarily nut-based proteins,” says Miyoko Schinner, company founder.

As Schinner explains, “Nuts have a high fat content that allows for the taste and texture of cheeses and are easily recognized by consumers. However, we are experimenting with legumes and algae. While legumes are high in protein, we have to add the algae to provide the fat content we need for cheese analogs.”

The plant-based yogurt segment has been growing rapidly—by 50% annually—and is predicted to continue to do so over the next few years. In the natural channel, while some 25% of all fluid “milk” sold is now plant-based, only 8% of yogurt products are from plants. The numbers in the conventional consumer channel are only about 8% and 1%, respectively.

This opportunity has encouraged companies such as Good Karma to move into dairy-free yogurts. The company currently offers yogurt analogs made of cultured flaxmilk, pea protein, plus live and active cultures.

“One of the biggest hurdles for plant-based proteins, which is obvious in beverages but actually critical for functionality for all plant-based products, is solubility—or how readily the protein dissolves,” says the Good Food Institute’s Specht. “A number of processing techniques can improve solubility, such as various methods for hydrolyzing proteins—breaking them into smaller pieces that dissolve better. There also are techniques that can take a whole protein extract from a plant and fractionate it to select for only the most soluble protein fraction. All of these can increase the suitability of various plant proteins in products like dairy alternatives and other high-protein beverages.”

Supplementing one protein with another allows for the creation of foods that are more affordable, more well-rounded nutritionally, and more sustainable. As plant-based proteins diversify and advance technologically, scientists and ingredient companies are finding increasing opportunities for pairing different proteins.

As reported last year by Laurice Pouvreau, PhD, a senior scientist for the NIZO Food Research institute, “Plant proteins can be deficient in essential amino acids, so it is necessary to mix proteins in appropriate ratios to deliver the target amino acid profile. Protein blends allow novel source proteins to compete with animal proteins in nutritional quality.”

Specialty proteins such as algae and mycoprotein, while offering unique attributes, can be costly. But as those ingredients see more use in the industry, their cost is coming down. Until then, they can be used to great effect as components in a multi-protein system.

Combining proteins, for example rice and pea, creates a food that is high in bioavailable protein and more nutritionally comprehensive. Neither pea protein nor rice protein are complete, but using the two proteins together yields a more complete source. These types of ingredient combinations also allow for texture balance as well as cost reduction.

As food product developers look to some of the more surprising plant-based protein applications on the horizon, the options seem endless. Consumers want more vegetarian options, but they don’t wish to give up the sensory pleasure of animal proteins. They also want added protein in other products, especially in cereals, bars, snacks, and beverages.

Consumable liquids present both a challenge (due to solubility) and an opportunity for manufacturers. Consumers are looking at non-traditional ways to add protein to their diet, and alcoholic beverages are one of the more surprising additions to the list.

Companies are now working on ways to develop protein from co-products of malt whiskey, while athletes are looking for craft beers with a higher-than-average protein count. Some processors even have included mycoprotein in Bloody Mary mix formulations.

Plant-based protein has expanded rapidly into baked goods in the last year. Pea protein is becoming a more common egg replacer due to its emulsification and viscosity, enabling it to whip and hold air in mayonnaise and baked goods. Potato protein, too, is moving into the same space. It is also heat-stable, adding to its functionality in baking.

Vegan butters are being made from protein-heavy nuts, and some even use algae protein to increase the nutritional value while also improving the texture of butter alternatives. Breads, tortilla shells, cereals, and snacks have been formulated with added rice protein and mycoprotein to boost the total protein content.

Another benefit to plant sources of protein: If a protein contains glutamine, there’s a process that can convert that amino acid into an MSG alternative for savory foods. This allows formulators to respond to consumers with MSG sensitivities.

There is much potential left untapped in the industry for downstream processing used to improve the functionality of novel plant proteins for use in meat, poultry, and seafood analogs. The Good Food Institute is currently engaged in research to identify specific plant proteins that have been explicitly tested for meat-analog production, and not just plant protein that is increasingly valued by the larger food industry.

The institute also strives to delineate and to clarify functionalities of those plant proteins that make for more and better plant-based meat analogs. It is reasonable to expect the institute’s findings will lead the industry to more effective and popular meat analogs in the near future.

Today, about 65% of household shoppers in the US have purchased meat and dairy analogs. Clearly, the trend of purchasing animal-free foods has moved beyond vegans and vegetarians to include meat reducers and health-conscious consumers. As mainstream adoption increases, we know that our goal must be to deliver foods with the highest protein content and best taste at the most reasonable cost, rather than focusing on any specific plant or source. 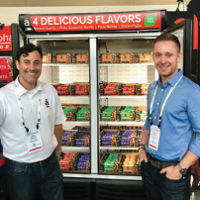 Loren Wallis, CEO, and Cole Orobetz, COO, co-founded The Miso Brothers Inc./ Alpha (Plant-Based) Foods. Wallis also is founder and former CEO of Good Karma Food Technologies Inc. and spent more than 30 years in the natural foods sector as an inno-vator and entrepreneur, pioneering flaxmilk milk analog. Orobetz has more than 15 years of business experience across multiple areas, including new ventures, start-ups, operations, accounting, finance, capital, M&A, manufacturing, strategy, and turnarounds. With Alpha, the dynamic duo have taken plant-based burgers, sausages, chicken, and other meat analogs to the next level, including the Alpha Dog, a non-GMO, vegetarian ballpark-style frank with the flavor, aroma, texture, and “sizzle” of a true hot dog. Contact them via Alpha’s website, www.alphaplantbased.com.

Originally appeared in the November, 2017 issue of Green Light for Plant Proteins.