Retail State of the Industry | Soups & Side Dishes

“I love healthy foods and eating from my garden,” said Winfrey. “When Kraft Heinz approached me for a food line, what got my attention is making nutritious comfort foods more accessible to everyone. This product line is real, delicious food with a twist.”

Why soups and sides?


“Refrigerated products are on the rise and we saw an opportunity to drive excitement in this section of the store with convenient soups and sides made with real ingredients and easy preparation,” said Nina Barton, who last year (prior to a promotion) was Kraft Heinz senior vice president of marketing, innovation and research and development.

To Barton’s point, retail sales data from IRI, a Chicago-based market research firm, show sales of most shelf-stable dry packaged sides and canned soups were down or relatively flat during a 52-week tracking period ended Dec. 31, 2017. Interestingly, however, dollar sales of refrigerated side dishes grew 8.56% to $2.8 billion with an accompanying unit sales gain of 5.58%. Within the refrigerated entrees category, refrigerated soups posted an 18.85% sales increase to $325.2 million with a 16.95% unit gain during the same time period.

Again, what’s hot in soups—is cold. In fact, the refrigerated soup category has news on all fronts and from coast to coast. 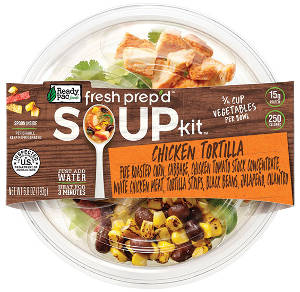 Dry ramen and soups leader Nissin Foods, Gardena, Calif., took a health stance in 2017. It reformulated its Nissin Top Ramen brand to cut sodium by an average of 15% across all flavors, remove added MSG and remove all artificial flavors. Separately, it introduced Cup Noodles Very Veggie, which it says is the only instant noodle cup to feature one full vegetable serving. Varieties include Chicken, Spicy Chicken and Beef—and each features a different mix of edamame, carrots, broccoli, corn, green beans, cabbage, red bell pepper and tomatoes.

They say good things come in threes and that certainly applies to side dishes. Of course, grocery shoppers find numerous options across the shelf-stable, refrigerated and frozen departments. It’s also clear that health, comfort and foreign flavors are three key themes. Meanwhile, convenient packaging and quick preparation have become standard.

Staying in the dry aisle, there’s certainly no shortage of new products involving of grains, rices and pastas.

Refreshing the dry pasta shelf are companies of all sizes—ranging from the likes of The Kraft Heinz Company and Barilla America to small players such Free to Eat Inc., Los Angeles, Upton’s Naturals, Chicago; and Pamela’s Products Inc., Ukiah, Calif.

Free to Eat launched Cybele’s Free-to-Eat Superfood Veggie Pasta in five varieties—all of which feature vegetable blends and are free from the top eight allergens. Each 3.5oz serving provides more than one full serving of vegetables, 23g to 25g of protein and is a good source of potassium and vitamins A and C.

Refrigerated pastas also were among those new items from Mealtime Stories (Oprah, Kraft Heinz). New sides from O, That’s Good include Creamy Parmesan Pasta (with white beans) and Three Cheese Pasta (with butternut squash). Two additional mashed potato sides are Original and Garlic—each with a “twist” of added cauliflower. All 20oz side dishes carry a suggested retail of $4.49.

Pinnacle Foods also took to the R&D drawing board to create new, healthier alternatives to consumers’ favorite starchy foods like pasta, rice and mashed potatoes. The innovative new line of Birds Eye Veggie Made products, which launched in 2017, includes a wide variety of veggie-based options that allow consumers to eat more veggies and fewer starches without sacrificing the taste and texture they love. 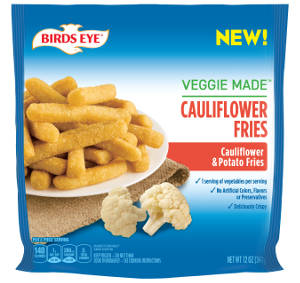 Pinnacle came back early this year with eight more items, expanding its Birds Eye Veggie Made platform to include four more Veggie Made Pasta varieties, such as classics like Spaghetti Style Marinara and Fettuccine Alfredo, as well as an entirely new line of Veggie Made Tots & Fries offerings made with cauliflower and broccoli. The new 2018 items are expected to start hitting shelves in April.

Originally appeared in the March, 2018 issue of Prepared Foods as Creative Comfort.