This website requires certain cookies to work and uses other cookies to help you have the best experience. By visiting this website, certain cookies have already been set, which you may delete and block. By closing this message or continuing to use our site, you agree to the use of cookies. Visit our updated privacy and cookie policy to learn more.
Home » 2018 Pizza Trends: Growing—Through Thick & Thin
2018 Food and Beverage TrendsMeals & Sides
Retail State of the Industry | Pizza

How does the saying go? Isn’t it, “Good things come to those who bake.”  Actually, that’s not exactly it—but retail pizza manufacturers aren’t complaining.

Any Way You Slice It

Bringing something truly new to the freezercase last year was the Nestlé Foods Division, the category parent to DiGiorno, Tombstone, Jack’s and California Pizza Kitchen. In this particular case, Nestlé changed things up with a DiGiorno Crispy Pan Pizza, which bakes right in its own tray. Offerings are topped with edge to edge cheese “for a crust that is crispy and caramelized on the outside and soft and tender inside,” the company says. Four 12” x 8” varieties—including Pepperoni, Four Cheese, Supreme and Three Meat—rolled out nationwide with a SRP of $8.49. 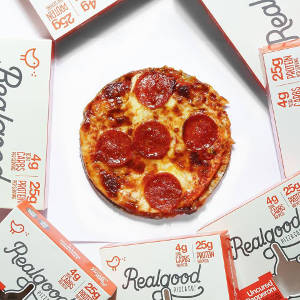 Real Good Pizza crust is made from a blend of proprietary antibiotic-free chicken and parmesan cheese—instead of traditional flour, corn or rice base. As a result, Real Good pizza offerings contain just 4g of carbs with 25g of protein per serving.

No less active last year was the Schwan’s Company, parent to the Freschetta, Red Baron and Tony’s brands. Schwan’s actually added to the list last year by acquiring three more frozen pizza makers specializing in branded, private label and foodservice. They included MaMa Rosa’s Pizza, Sidney, Ohio; Better Baked Foods, North East, Pa.; and Drayton Foods, Fargo, N.D. At retail, Schwan’s shifted gears after 40 years with the Red Baron, to introduce a new “Baroness” character, a real mom with daily meal challenges, for brand marketing campaigns. Late in 2017, Freschetta announced a brand relaunch, beginning with entirely new packaging graphics. Officials say the new, clean Kitchen Fresh Pizza design (rolling out in time for the NFL Super Bowl) is a one-shot approach in which all of the ingredients and packaging elements are shot together for an authentic feel.

Another firm changing the competitive set is The Real Good Food Company Inc. Last summer saw this Los Angeles business introduce two lines of frozen pizzas and frozen breakfast pizzas (both with personal and large sizes; and multiple varieties). The disruptive thing is that Real Good Pizza crust is made from a blend of proprietary antibiotic-free chicken and parmesan cheese—instead of traditional flour, corn or rice base. As a result, Real Good pizza offerings contain just 4g of carbs with 25g of protein per serving.

1. Frozen pizza is one of the largest categories in the retail freezercase. Information Resources’ InfoScan data show category dollar sales rose 3.02% to approximately $4.8 billion with an accompanying 1.55% rise in unit share during a 52-week tracking period ended Dec. 3, 2017.

2. One category disruptor is The Real Good Food Company Inc., Los Angeles. Its Real Good pizzas have crusts based on a blend of proprietary antibiotic-free chicken and parmesan cheese—instead of traditional flour, corn or rice base.

Other new offerings include specialties from Smart Flour Foods, Austin, Texas, and Flagship Food Group, Denver. Already known for its frozen gluten-free, ancient grain pizzas, Smart Flour Foods introduced three ancient grain pizza snacks last summer. They’re made with sorghum, amaranth, teff, plus chia in the crust and filled with hormone-free cheese and nitrate/nitrite-free pepperoni in the meat versions.  The snacks also are free of artificial colors and flavors; made with several organic ingredients; and free of many allergens including wheat, nuts, tree nuts, soy and eggs.

For its part, General Mills was busy in both the snacking and pizza dough categories. In the freezercase, it introduced Totino’s Pizza Rolls in a Macaroni & Cheese with Bacon variety. Out in the refrigerated dough case, General Mills unveiled two new Pillsbury’s Best pizza doughs (Classic, Thin Crust) now in individually wrapped parchment paper. Now appearing in an attractive narrow package (no longer a cylinder can) this product makes it simple for consumers to simply unroll and place the dough and parchment on a baking pan, top and then bake. Available in Classic and Thin Crust varieties.