Meat and poultry products are consumer favorites, food industry mainstays, and protein powerhouses—all factors that will keep the US industry for animal protein growing despite challenges from plant protein alternatives, according to market research firm Packaged Facts.

Packaged Facts forecasts that total retail sales of meat, poultry, and meat substitutes will be just shy of $100 billion in 2021. Due to its higher price point, meat will dominate dollar sales despite still trailing poultry in per-capita consumption volume. Meat substitutes will account for less than $2 billion of the projected total.

Yet despite meat’s popularity and projected growth, this is not an industry without its fair share of scrutiny, comments David Sprinkle, research director for Packaged Facts.

“Meat continues to evolve and be re-evaluated by consumers in the wake of years of consciousness-raising on several topics, including humane animal treatment, meat processing, and nutrition,” says Sprinkle.


Thus in the years ahead, Packaged Facts predicts consumers will be mindful of their meat consumption, whether for economic, caloric, dietary, or ecological reasons. For those who seek out sustainable meat and poultry, specialty products like grass-fed or local beef, heritage poultry and even wild boar will be on point. Consumers will look to meat professionals to connect them with these products, explain the product benefits, and educate on how these products are best prepared and served.

Consumers minding their pocketbook will take cues from how cultures around the world make less-expensive cuts like brisket taste great. Likewise, retail sales of meat will also receive a boost from growth in consumption of pork, which is expected to maintain its low cost advantage over beef. In addition, many previously overlooked cuts of pork (such as pork shoulder) are experiencing a resurgence in popularity both at retail and in restaurants.

Meanwhile, retail poultry sales are expected to increase during the next five years, supported by poultry’s cost advantages relative to many types of meat. A further advantage for chicken: health authorities such as the American Heart Association continue to encourage consumption of poultry and seafood as alternatives to red meat.

Last spring saw Nielsen review the meat snacks category. In a late March post, “Where’s The Beef? Check the Snack Aisle,” analysts noted the meat snack category has posted compound annual sales growth of more than 7% during the past four years, with sales growth of 3.5% for the year ended Feb. 25, 2017.

A $2.8 billion category, meat snacks are bucketed into jerky and sticks, each of which contributes about half of total sales. Jerky had a particularly strong recent year (from 2016 to 2017), boasting sales growth of nearly 7%. Sales growth in the meat stick sub-group was flat in the recent year, after dramatic ups and downs in the previous three years.

Following are new product examples across both categories. 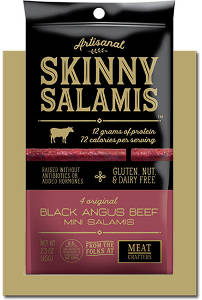 Back in the 1980s and early 1990s, the US declared a “War on Drugs” and promoted the phrase, “Just Say No” to America’s youth. Of course today finds meat and poultry companies wanting to “just say no” to antibiotics and growth hormones.

Best of Both Worlds: Restaurant-style flavors and sustainable sourcing.

If consumer restaurant visits are down, why not bring the restaurant to them? Meat, poultry and seafood processors hope to do just that with more artisan, upscale and adventuresome new products and flavors.

Originally appeared in the March, 2018 issue of Prepared Foods as Meat the Future.