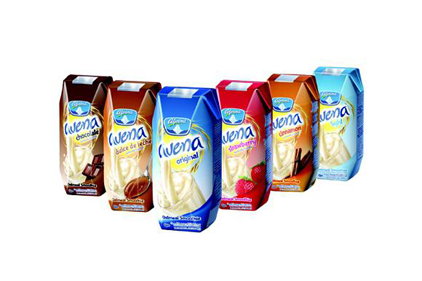 Alpina Foods, Batavia, N.Y., says its Alpina Avena, a traditional, creamy, oat-based dairy beverage, has been a staple in many Latin American homes. In recent years, Latin American foods have increasingly grown in popularity across the Americas as consumers look for new and exciting flavors. This widespread trend—along with consumers' continued interest in convenient and healthy meal options—has prompted Alpina to expand its Alpina Avena line of oat smoothies.

For the record, Alpina began manufacturing Avena in Colombia in 1996. The first mass-produced oatmeal drink, Avena quickly became a top-selling brand of oat-based drinks in Venezuela, Ecuador and Peru, and was widely accepted across Central America. With 170 calories, 5g of protein, and 15% of an adult's recommended daily allowance of calcium per serving, Alpina Avena helps satisfy hunger on-the-go or at home.

"Alpina Foods brings nearly 75 years' worth of dairy experience to our operations here in the U.S.," says Gustavo Badino, Alpina Foods' general manager. "But we also bring an unparalleled understanding of Latin American flavors and traditions, and we're excited to bring them together to offer an expanded line of Alpina Avena to consumers nationwide."

Avena's new packaging, shelf-stable tetra packs, incorporates bold colors. The design highlights the flavors, and in a nod to its heritage, all Alpina Avena packaging features one side in English, the other in Spanish.

Alpina Avena is available in Original, Light and Cinnamon, as well as new flavors Dulce de Leche, Strawberry and Chocolate. All flavors are available in 8.4oz (250mL) tetra packs, and original and cinnamon are also available in a 32oz size. Avena is sold in select regional and independent retailers including WalMart, Winn Dixie and Publix in South Florida; Fiesta Markets in Houston; Western Beef in New York/New Jersey; and nationwide in independent retailers as well as select WalMart, Stop & Shop, and ShopRite stores.